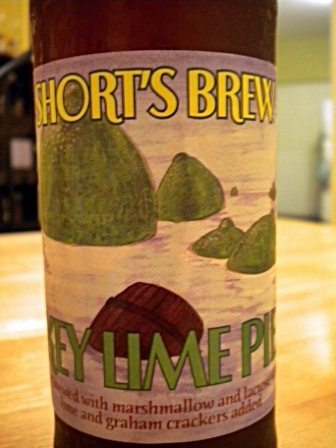 “Beer brewed with marshmallow and lactose with lime and graham crackers added.”

Ryan: If you’ll recall, we had a not-so-pleasant experience with our first ever bottle of Short’s Key Lime Pie.  We don’t know if the bottle was infected or if we had an off batch – but something was definitely wrong with that beer.  But we weren’t about to let a bad first experience get in our way of trying this again.  So, I reached out to a fellow beer blogger who lives in Michigan to see if he had experienced similar issues.  He hadn’t, but he did suggest letting the beer warm considerably before drinking.   I don’t know if the bottle we had before was infected or if we just needed to let it warm but this beer was far better the second time around.

There was considerably more lime in the nose and absent was that funk and sourness we picked up in the first-go-round.  The lime was very present on the palate too but so was the marshmallow that added a light, but pleasant, creaminess.  The graham cracker was there too!  It was not as intense as the first tasting but maybe that is because that was the only flavor that didn’t stand out as off.  This beer finished sweet and tart just like a piece of key lime pie.

There was a night and day difference between the first time we sampled this and the second.  And, I have to say, I really like this.  It was not quite as good as Strawberry Short’s Cake but there may never be a beer that is.  If you have had an off experience with is beer, like we did, maybe try letting the bottle warm before pouring the beer.  I can’t guarantee that is the fix but it worked well for our second tasting.

Karl: All right, Shorts – it’s Key Lime take two time. We do owe you another shot, don’t we? You’ll remember that last time, we were operating under the assumption that our last try at your Key Lime Pie beer was a bum bottle. On a separate night, far removed from our first Key Lime Pie Try to clear any memories of funk out of our minds, we gave it second chance.

You’ll also remember that despite the terribly off flavors of the first beer, there were things to enjoy about it. (This says a lot about the strengths of Shorts – they can produce a beer that is honestly and mistakenly foul, and I’ll still find something positive to come out of it. Maybe I’ve just got Stockholm Syndrome. Shortsholm Syndrome? I’ll get our doctors on it.) When I forced my brain to get past the off flavors, that wave of graham cracker crust that crashed across my palate was pure beer magic. On the first taste, it took a few seconds, then it kicked in. Second taste took a touch longer – like it was teasing me now that I knew it was there – and then my tasted buds opened up with the same rush of graham cracker. It was, for lack of a better word, fun.

Since I knew of the Grahamrush going into the Take Two Pie Try, I was prepared for it. I was also (again) really hoping for an experience that would show me the error of my ways, and open my eyes to what was now the award-winner in the Experimental Beer category of the Great American Beer Fest. We really thought we had it all together – a better beer, a proper temperature, and an appropriately open mindset. So..what went wrong this time?

I gotta say – I still don’t get this beer. Everything was seemingly “on” with this one but nothing grabbed me. I did taste the emergence of the lime, the graham cracker rolling wave was still there but not as dramatic, I got some of the burnt-sugar characteristics of the marshmellow…I guess maybe I just don’t like key lime pie. Either that, or the brightness, the sparkle and the creaminess I associate with that particular pastry didn’t translate into the bottle. Denver may have loved this beer, but my heart belongs to others in the Shorts firmament.