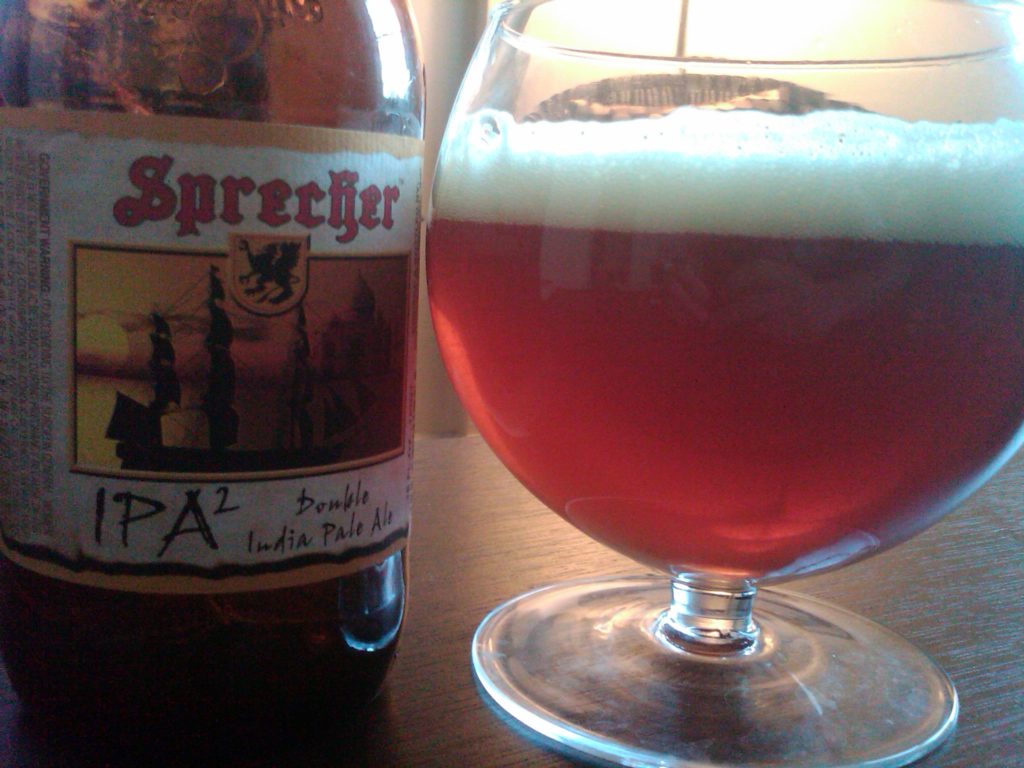 Of the Sprecher IPA2, the brewer says:

“This traditional ale was originally brewed in England for the British troops stationed in India. Double dry-hopped,it has intense hop flavors and aromas delicately balanced with a potent, yet delicious, malty sweetness. “

(Editors Note: This Sprecher IPA2 review and several of the ones that follow it are part of a stockpile of tasting notes that have been siting in our notebooks for months that we just haven’t had time to get to. Sure, some of these reviews may not be as timely as we had originally hoped but they are still – somewhat – deserving of a spot in the annals of GDB.)

My exposure to Sprecher beer has been rather minimal over the last few years. It’s not for lack of availability but more for my strange obsession with having my beer fridge all neat and tidy. You see, Sprecher bottles most of their beers in short, fat 16 oz bottles as opposed to your standard 12 oz longneck. Leave it to me to find fault in a brewery that gives me more beer in a bottle, but I had a hell of time creating space for them in my fridge. They were wider than most of my bottles so they took up more space – thus less variety. Like I said, it’s a strange obsession.

But, a few months ago I ran across three Sprecher limited release and premium reserve beers and thought it was high time I put my differences with the bottle size aside and give them a shot.

And I’m sure glad I did.

The first beer I sampled was Sprecher’s take on a double IPA, the IPA2. Poured in to an oversized barleywine glass, the IPA2 appeared a deep orange in color with an ominous murkiness to it.

The nose laid the foundation for a wallop of an IPA; loads of passion fruits, apricot, peaches and Starburst candy popped from the glass. Those flavors were reciprocated on the palate with big, citrusy hops hitting you up front – grapefruit, tangerines and more apricots – follow by a smooth caramel backbone to balance things out.

The body definitely had some heft. The mouthfeel was very thick and heavy; coating.

Between the passion fruit bouquet, the overabundance of citrus-y hops and the super-thick body – this may go down as one of the boldest double IPA’s I’ve ever encountered.