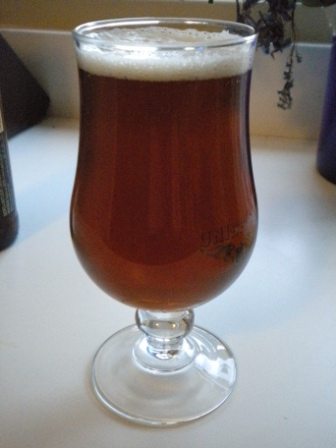 If this beer is a garden, the color is the soil. (Or something like that.)

Over the past couple days we’ve been heralding the brewing of Traverse City’s Right Brain, and it’s only fair that rather than just stick with the views of one Guy about the place, how about get everyone involved with one of the more curious brewing choices?

Karl brought back a growler of Right Brain’s Honey Basil Ale to bounce off the other gentlemen, and here’s what they thought (and then we’ll quit the adoration until the next trip):

The nose of this beer is all basil.  And, not basil from a spice jar.  I’m talking fresh basil that just got plucked from the garden.  In fact, I imagine this is what Guy Fieri smells like.

This beer doesn’t quite taste as basily as it smells, although it is definitely noticeable.  There is actually a pleastant citrusy and sweet tug of war going on in my mouth.  You get the basil up front, followed by some citrus and lemon zest with just a hint of honey sweetness bringing up the rear.  The finish is a bit drying but that only makes me want to take another sip.

More From GDB:  In Which The GDB Live the High Life

The basil is definitely an interesting addition to this beer.  It is not overpowering but it is there.  Enough so, that I actually questioned if I had basil stuck between my teeth and felt compelled to run to a mirror and check even though I knew it wasn’t possible.

When Karl told me what he was bringing back I wasn’t so sure about it, but once again Right Brain does the unimaginable – taking a crazy idea for a beer and making it great.

Andrew: What a fascinating concept for a beer – honey and…basil? I have to admit that I was very skeptical about this beer, but I figured what the hell, I’ll give it a shot.

The beer poured a beautiful copper color, and a very citrus-y basil smell immediately smacked me in the face. At this point I was a bit concerned that the basil flavor would completely dominate this beer but found that that simply wasn’t the case. The basil flavor of the beer was actually somewhat muted and wonderfully balanced with the sweetness of the honey and citrus.

I liked this beer; in fact I’d like to have another one. Kudos to breweries that are willing to step out of the box and try new and different flavors for their beer.

Karl: The Honey Basil Ale quickly became my wife’s favorite RBB selection available while we were there – we had a couple pints over darts during the afternoon so I am a little more familiar with this beer fresh from the tap as opposed to hanging out in a clear-glass growler for a few days.  (Side note:  Why do craft beer people, who should know better, continue to use clear glass for their growlers?  In  my world, it’s brown across the board.) Suffice to say, the lesson for me here is exactly what kind of changes happen in just a few days after beer leaves the tap.

The Honey Basil stood up pretty well to the ravages of time – it came off the tap late Saturday night and was cracked Wednesday afternoon.  That said, the brightness of the basil and the fresh zing of the lemon zest had backed off significantly.  Not to get too psychedelic on you, but in my mind the color of this beer was a bright vibrant green when it was fresh, and a darker, duller green in the growler.

Still, the Honey Basil was pretty good.  Fully basil-y with no backing off from the presence of the vegetable (remember, the basil plant is related to mint, so depending on how you look at it it’s really not that crazy to throw it into a beer…okay, it’s a little crazy) and the muted flavors of the honey and lemon helped cut the grassiness of the plant?  Does that make sense?  I suppose it’s one of those you-had-to-be-there kind of things.

More From GDB:  Stone From The Streets: Arrogant Bastard, Off The Shelf

As I explained was the case with the Empire Spear asparagus, with a lesser brewer you’d sample one of their more bizarre vegetable beers on a whim, as a goof.  You might order a pint just to give it a shot, maybe share it around with your friends for the experience of it, rather than actual enjoyment.  Right Brain can manage to take ingredients that you would never think would work in beer and create something that you’ll order seconds of and horde to yourself.  That’s pretty impressive, in my book.