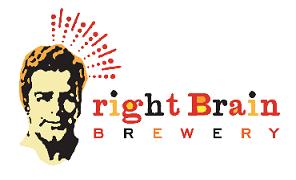 I recently spent a couple days in Traverse City, Michigan.  In a state that’s rich with excellent breweries, the Traverse area is particularly lucky to have not one but two restaurants with brewpubs (Mackinaw Brewing Company and North Peak Brewing, both with average to above-average beers) and a Jolly Pumpkin outfit up north on the Old Mission peninsula.  In addition to all of these, Traverse also has one of the most interesting yet unknown breweries in the state – Right Brain Brewery hidden in the Warehouse district.

The lack of discussion about Right Brain Brewing is, I believe, by design.  If you had someone who I heard repeatedly described as a “mad scientist” of brewing working his magic in your own backyard, would you tell people about it?  Or would you keep it under your hat and drink it all yourself?

John Niedermaier is the man slaving away over a hot tub of mash and wort for our benefit, and the reason you keep going back to Right Brain is because you barely ever see the same thing twice.  They don’t bottle, they offer kegs to a few limited local restaurants and otherwise keep everything on tap at their brewpub. 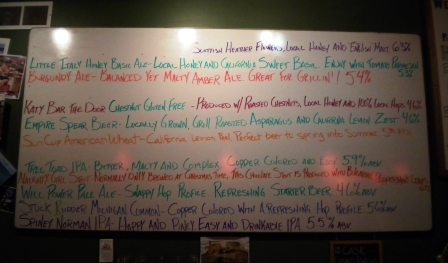 The offerings at Right Brain Brewery. Saw it on the website but not on the board? You’re out of luck (like we were with a Man In Black stout and a beer brewed with sugar beets).

For another look at the board, I’m not sure the details are quite right in this RBB-related post, but you can check out some of the other offerings from a year before.

If it’s out, it’s out, nothing you can do about it.  While they try to have a dozen on draft at any time, we showed up on a Friday night and they were already out of two, the next afternoon they were down another two.   You’ve got to act fast and have a good memory – if you love something, you’ll have to make it yourself if you ever want it again. 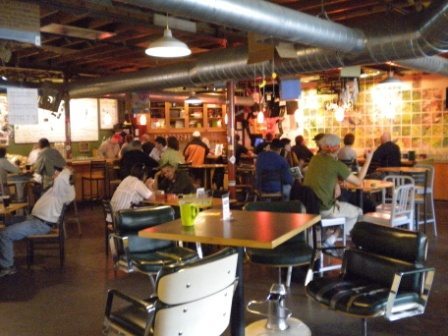 A nearly-full view of the pub. It’s a small space but almost always busy.

Rather than wax poetic about the brewery as a whole, or get too in-depth into beers you’ll probably never drink (unless you’re already on the way there RIGHT NOW), I thought a quick look at one weekend’s worth of beer drinking would provide a pretty good idea of what goes on at (what Karl is calling) the Best Brewpub You’ve Never Heard Of.

We lucked into a visit during the Asparagus festival in Empire Michigan.  The Traverse area is basically “all cherries all the time” 51 weeks during the year, except for last weekend when they honored the humble vegetable spear.  To celebrate, RBB actually brought back an ale I remember them brewing last year – an asparagus ale.

More From GDB:  On Hallowed Ground: We Went To Shorts (Finally) 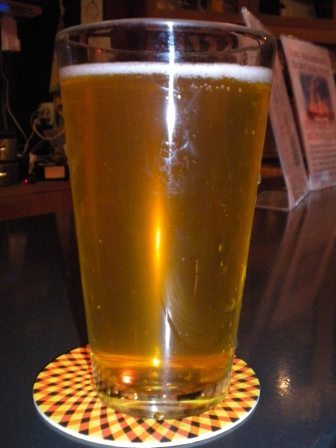 The Empire Spear Ale. You’d never know it was asparagus-y.

The natural followup question is, “exactly how asparagus-y is it?”  The answer is “very asparagus-y.”  If you don’t like the taste or smell of the vegetable, don’t even try this one.  Okay, give it a shot – they’re happy to provide samples at RBB, which is very cool of them – but you might not enjoy a full pint.

The asparagus taste is huge on the nose and definitely provides a lot of heft to the taste of the body, but the lemon zest keeps this from being a one-note brew.  It’s not musty or dull or boring at all, which you might expect.   It’s bright, crisp, clear and well balanced.  Even for people who appreciate a side of asparagus from time to time, don’t be surprised if you go in questioning the brewer’s sanity and come out questioning your own for enjoying it so much.

The board described this selection as “bitter, malty and complex.”  Oh, it was. 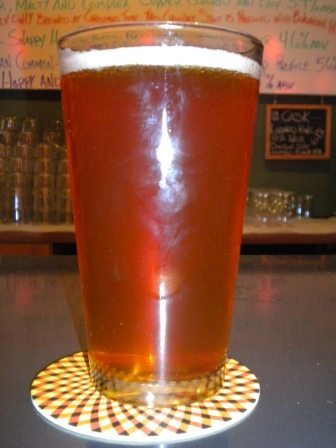 This was the 1st RBB brew I had, and yet I can still remember it. Must have been good.

I filled in a while back on the Chicagoist Beer of the Week beat, and filed a report on a bottle of Big Mug Amber and Arsenalnoye I picked up at a local central-European-centric grocery store, Gene’s Sausage Shop.  I described the Big Mug as tasting “like prison wine mixed with sharp cheese…” which I meant in a bad way.  This is going to sound like damning with faint praise, but that same wine-ness was present in the Tree Toad, but it was good.

Complex was right – it had all the malt and hops of a Lagunitas HopStoopid, and yet the finish was remarkably funky, multi-tiered and damn near indiscribable.  I don’t know if they used wine yeasts, threw in some blended red or port, or any other number of brewer’s tricks, but the end of this beer was like nothing else.  It went on and on, with a very long tail to the taste, and I wouldn’t honestly describe it as an IPA despite its hop presence.  It was a Frankenstein of alcohol, well worth bringing to life.