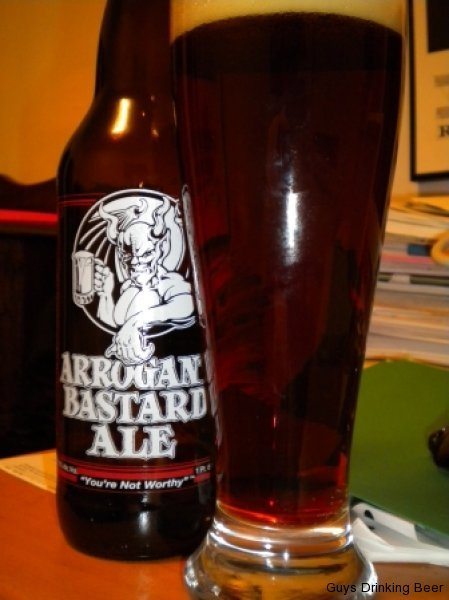 “This is an aggressive beer.  You probably won’t like it.  It is quite doubtful that you have the taste or sophistication to be able to appreciate an ale of this quality or depth.”


Be the above warning as it may, I gave it a shot regardless. I may not have the most sophisticated palate in the world, but damn it, if I can handle a Dark Horse Double Crooked Tree every now and again, maybe I can take on the challenge that is the Arrogant Bastard Ale.  Am I tough enough?  I doubt it.  But I’ll chance it.

The real question is: Since we’ve been so spoiled over the past week with city-wide Stone Insanity, will the off-the-shelf product still impress the average beer drinker?  And not just the complete beer lunatics like ourselves who’ve blown out our palates on the special release Stone in bars across town?  That remains to be seen.

While Ryan and Andrew were out and about on the town at Twisted Spoke and Whole Foods, I was stumbling into my local beer distribution location to find something to enjoy on a lazy indoor Saturday night.  And lo and behold, there in the cooler looking back at me, was a lonesome bottle of Arrogant Bastard Ale.

First off, make no mistake – this beer pours beautifully.  Into a pint glass, it was a nice deep red/amber color, with a pillowy off-white head.  Medium body, and a pretty well-balanced fully rounded taste.

Hops are present up front and pretty sharp – certainly no citrus taste like we detected in the ’09 Old Guardian.  They did linger for a bit, but again, not as extreme as I was expecting.  Beyond that…I actually thought it was mellow.

Perhaps a vertical tasting in the future will answer that question.  I’ve had Arrogant Bastards in the past and remember being more blown away by the taste and “hugeness” of the Stone flagship brew.  Maybe I’m not, as the above label mentions, “worthy.” But overall, I found the Arrogant Bastard to actually be a Pretty Nice Guy Ale.

Stone From The Streets: Arrogant Bastard, Off The Shelf was last modified: February 6th, 2018 by Karl