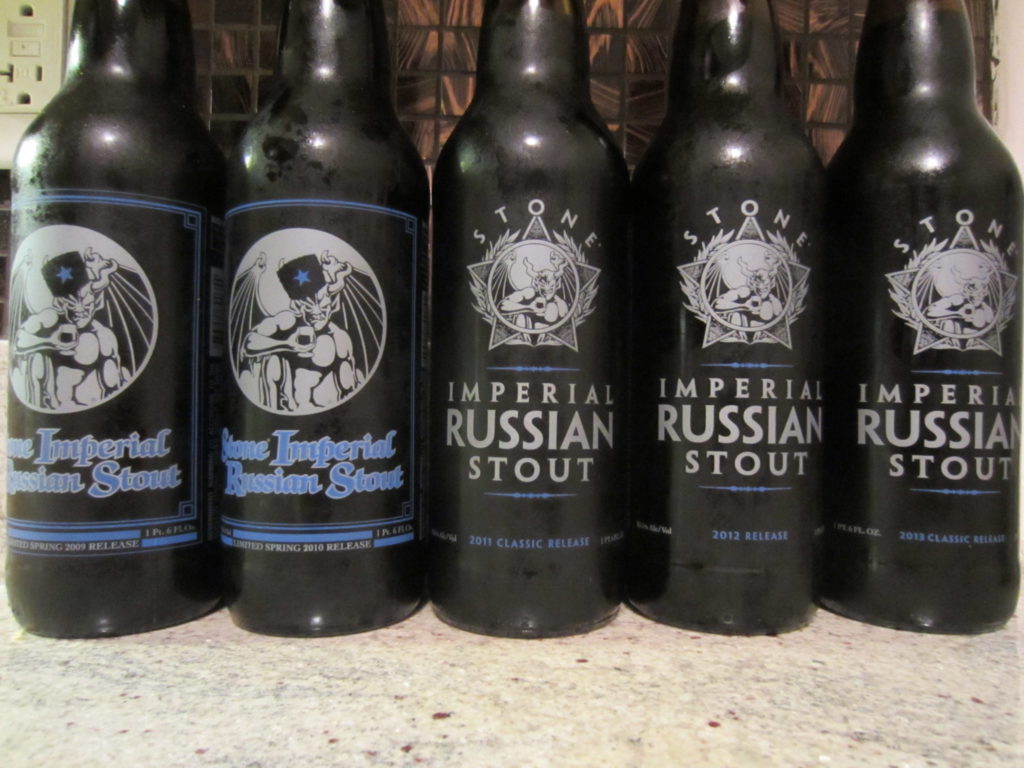 While we were hanging out with the folks at 4 Paws (which you can read more about here), we thought we’d take the opportunity to crack into something fun from the cellar.

Something like five bottles of Stone Imperial Russian Stout:

Ryan had a few bottles of this high-powered beer from Stone that had been burning a hole in his pocket. See what happens after a full 5 years in the cellar:

It’s been a while since we undertook a vertical of this magnitude. Not since the Central Waters Bourbon Barrel Aged Barleywine vertical (my head hurts just typing that) in April of this year have we gone through five bottles of high gravity beers. 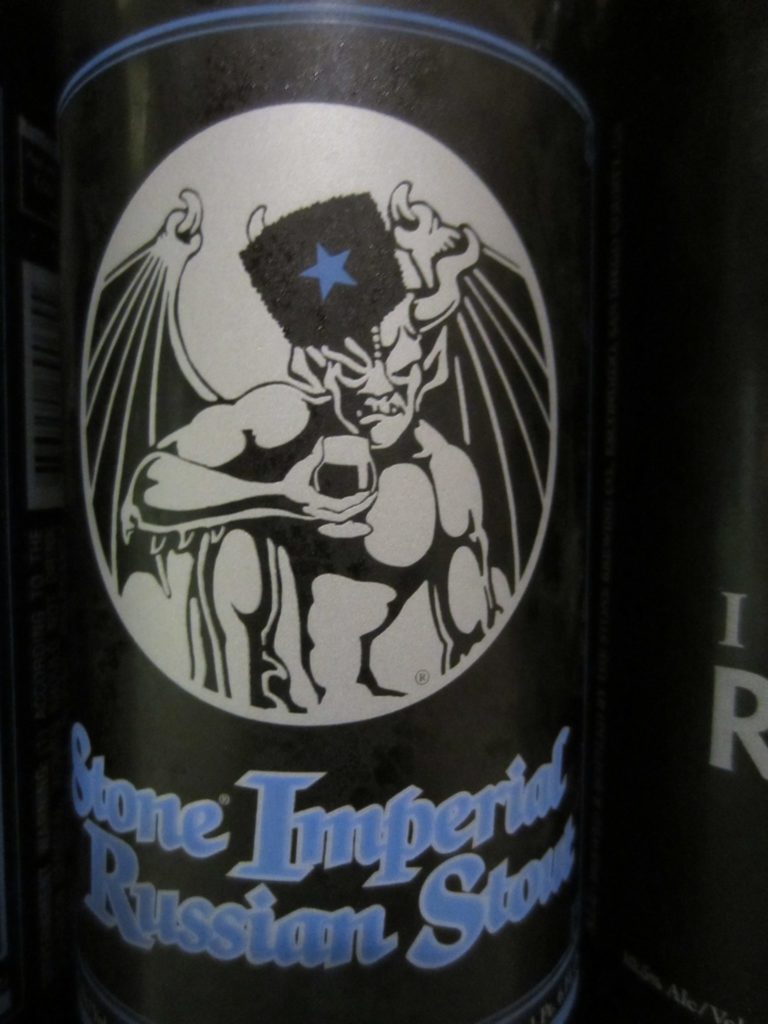 As such, it was good to spread the joy — and in one case, a distinct amount of pain, which we’ll get to shortly — around with friends. Vertical tastings almost require assistance from associates, which is one of the reasons why we like them.

As our personal demographic moves further away from “bar on Tuesday night” drinking to “selecting a nice bottle on Friday” it’s good to reach out and bring some folks around for a group effort. A gathering of like-minded beer folk. A brain trust of creators, imbibers, appreciators and other various ne’er-do-well’s to power down some rich, black, hearty Russian Imperial Stout on a weekday evening.

Ryan has been building this vertical of Stone Imperial Russian Stout since before the site began, laying back a 2009 a few months before Guys Drinking Beer’s inception. After making a final 2013 purchase, it was time to crack these all open, let them pour and see what happens.

Here’s what we discovered. 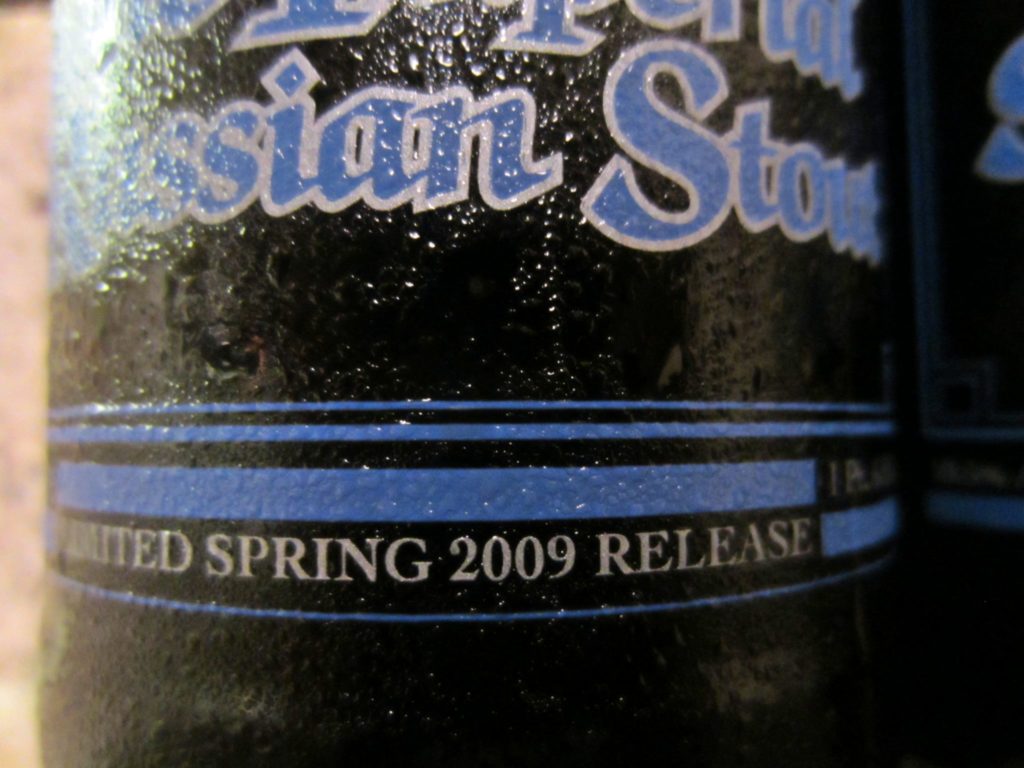 We often start with the oldest brews first, as the newer, fresher, oftentimes “hotter” versions can overwhelm you early. This leaves you without the wherewithal to find the lighter, more ephemeral, quick-dissipating and otherwise subtle flavors of a well-aged beer.

Five years sure siphoned off the aroma to the 2009 Stone Imperial Russian Stout — no scent was apparent, and it poured quite thin-bodied though it still had a surprising amount of head retention on display, which was a bit of a surprise. The flavor was still nicely roasty and bitter, however, and definitely quite strong — no wateriness here, and not a ton of mellowing out which you tend to see even among these massively heavy brews.

The only off-note to this was a whiff or a taste of seawater, strangely — but the chemistry of time does weird things to beers, as we’ve seen throughout these experiments. There’s zero tail to this beer — it’s there, then it’s gone. It’s fair to say that this has fallen off somewhat, with a one-note taste of roast and none of the complexity that we were hoping for. 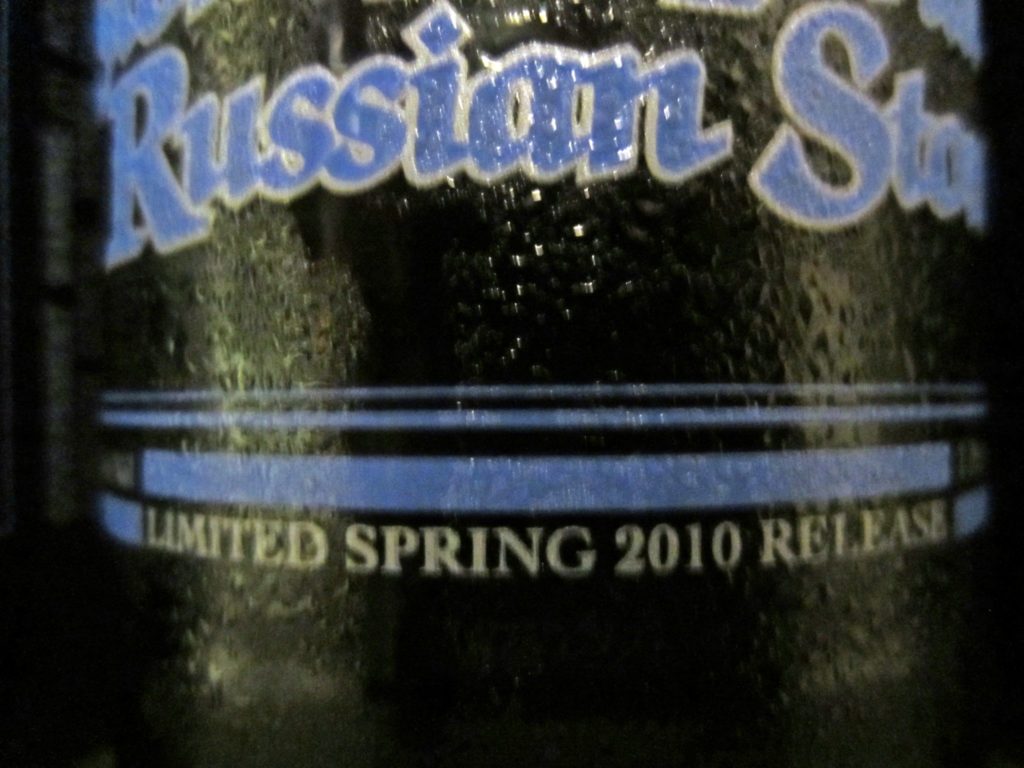 Here we find a light aroma lingering, featuring some coffee and roasted notes but nothing too strong or up front. The body here is still quite thin, but you do get some more cocoa or dark chocolate flavor welling up from the heart of the beer, though none of the actual coffee flavor hinted at by the smell of the beer (poured into goblets, if you’re wondering as to our glassware choices).

We did find a lingering tail to this beer, bitter and present for a while. Chemistry hasn’t quite taken this one off the cliff yet, but it’s come right up close to it. 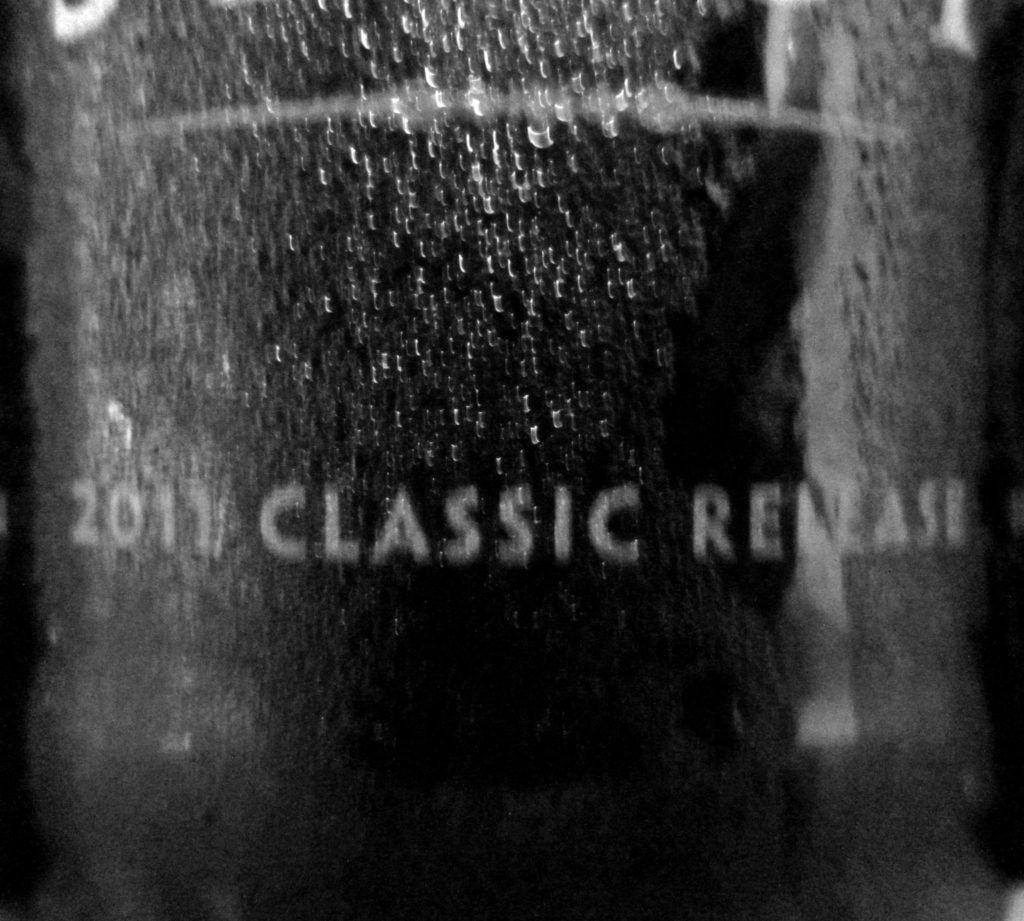 This is where things got weird. From my notes:

Ah, such is the joy and peril inherent in cellar aging a beer. This brew sat around, untouched for years, just waiting for the moment some lucky drinker would come along and crack it open. At that moment, it would be able to show all the magical properties inherent to its particular vintage…

…unless it gets infected, and smells like bleu cheese, feet, mold, sewer water, gym socks, or butter in a garbage dumpster.

These are all things from my notes equating the aroma of this beer. Oddly, it tasted okay, but we couldn’t get past the smell.

Yes, sadly, we got a bad bottle of this one, and down the drain it went. Such things can be frustrating, especially after exerting a decent amount of time and no small amount of expectation into a bottle of beer. But: It happens. It’s a shame, because in the past we’ve found that the middle year often exhibits the best traits of the cellar while also hanging onto the best parts of the fresher brew.

It’s worth noting that the beer poured with a nice amount of head retention and thick foam atop the beer, which means to me that this wasn’t a failure of sealing.

This time, this was simply an object lesson of the risks of beer cellaring. If there’s an upside, we’re now certainly quite aware of what a distinct off-flavor is, though I couldn’t narrow it down to any of these Cicerone-specified hunks of beer chemistry. It could have happened at any time, it simply happened at this one. We learned, we moved on to… 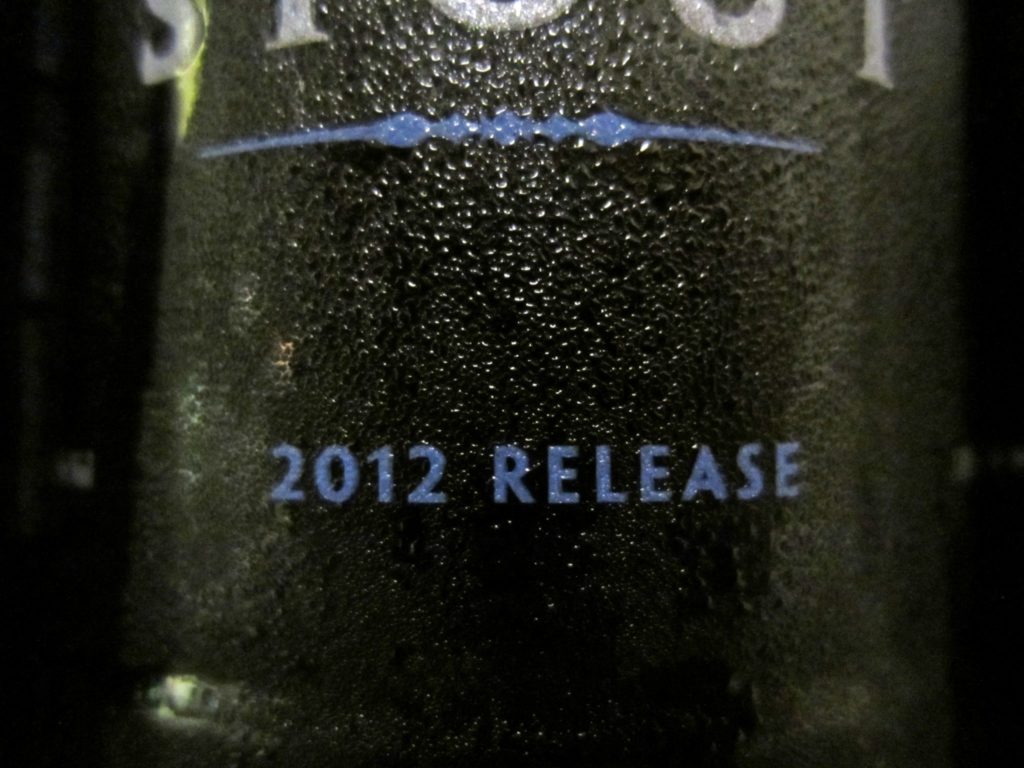 Now we’re back on track, and the beers are showing significantly fresher flavors and qualities — darker, thicker, heartier. hoppier, bitter-er (if that’s actually a term) and definitely more up-front in all ways the 2009 and 2010 were not.

The same bitter tail from the 2010 is present here, in much the same way, and this is a fine beer, if a bit indistinguishable from many other Russian Imperial Stout’s we’ve come across. 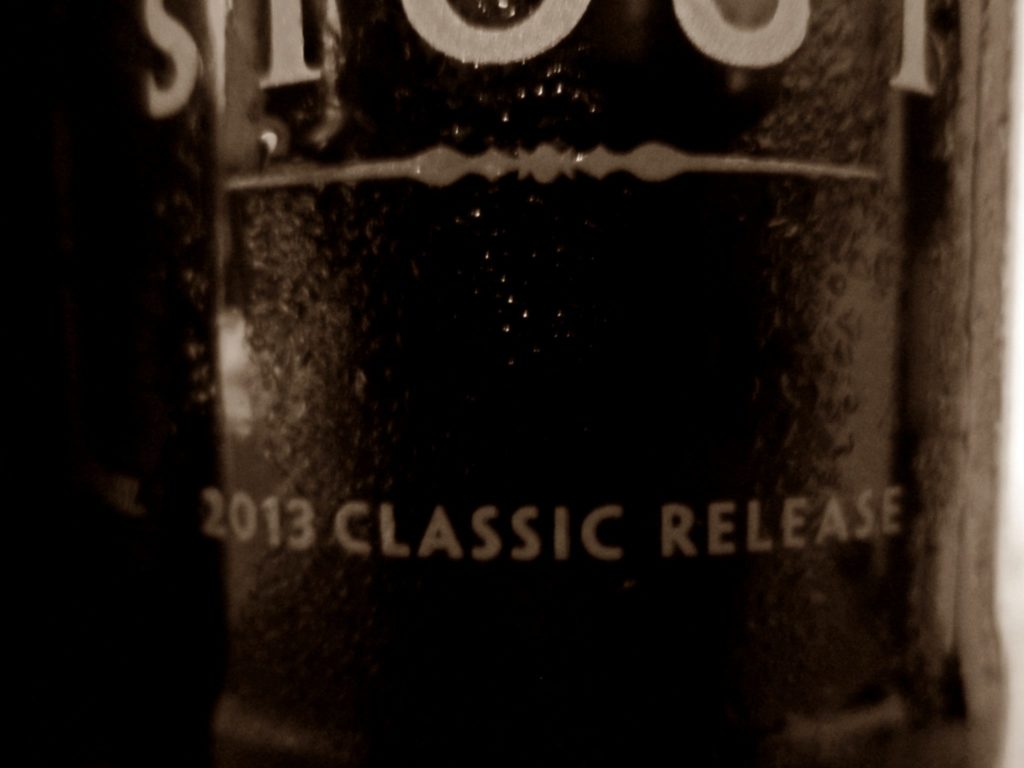 Finally, after traversing through years of beer history (discounting a quick skip over 2011), we arrive at present day. And wham — this beer is really not like the rest of our entries. Coffee! Cocoa! Rich, savory nuttiness! Hearty, roasty flavors right up in your face and loud, fizzy brightness and carbonation atop a deep velvety base.

It’s rare, when it comes to verticals, but the consensus was that we liked the fresh 2013 Stone Imperial Russian Stout far and away better than the other years. That said, this is an extremely consistent beer. The flavors of the fresh were certainly more aggressive, but to a certain extent they were there throughout the 2012-2009, just turned down like you would a radio volume knob.

The differences between the older beers were definitely much, much slighter than we’ve seen when traversing through other verticals as well. If you have one of these you’re hanging on to, feel free to crack it open now and enjoy. It might be a decade before you can pair one up against another and really see what time can do to these guys. 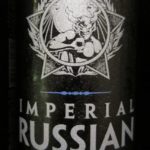 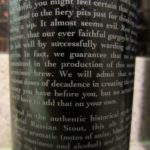 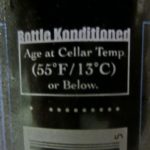 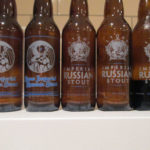 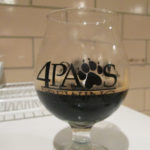