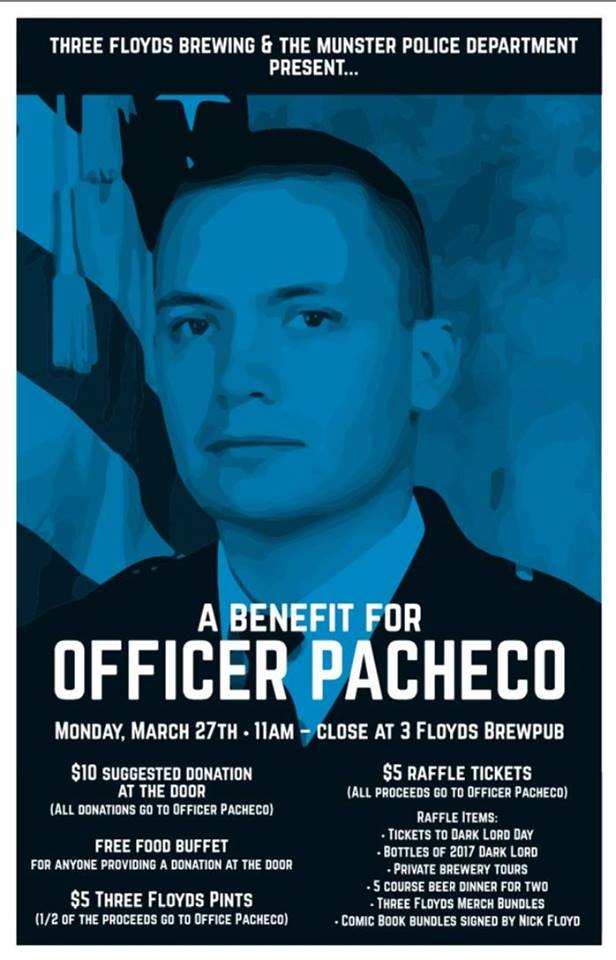 It’s not unusual to encounter a sizable wait to get a seat at Three Floyds Brewing’s popular Munster brewpub.

Today, plenty of folks are hoping there are lines all day.

Three Floyds is among many local businesses rallying in support of Munster Police Officer Joe Pacheco, who was diagnosed with stage 4 brain cancer late last year.

From 11 a.m. to 11 p.m. today, the brewpub will be home to a fundraiser for Pacheco and his family, where $10 gets you in the door for a food buffet and $5 pints. All buffet proceeds will go to the family, as will half of all pints sold.

In addition, the family will benefit from all $5 raffle tickets sold throughout the day – with items up for grabs that include tickets to the sold-out Dark Lord Day festival on May 13, as well as bottles of 2017 Dark Lord, private brewery tours, private dinners and Three Floyds merchandise, among other goodies.

Pacheco, who works as a resource officer at Munster High School, has started treatments at Northwestern Hospital for a tumor described as aggressive, inoperable and malignant, supporters said. Still, friends of the avid runner say they’re rallying behind Pacheco, his wife and two children, for what will be “the biggest race of his life.”

Today’s event is being organized by the Munster Police Department and its FOP Lodge 147 and precedes a May 20 fundraiser for Pacheco at the Center for Visual & Performing Arts in Munster.

Pacheco, an 11-year veteran, is a member of the department’s Honor Guard and serves as a mentor in their Explorer Post, a group dedicated to introducing young people to careers in law enforcement.

“Joe has devoted himself to protecting and serving the citizens of Munster, educating numerous students in the DARE program and has also received numerous commendations,” supporters recently wrote.

The event is one of several that Three Floyds quietly does in the community, including support for local teachers and schools. They’re loudly promoting this event, however, in hopes of generating donations for Pacheco’s family.

If you can’t make it to Three Floyds today, you can join the brewery in supporting the family through a GoFundMe account set up for them.