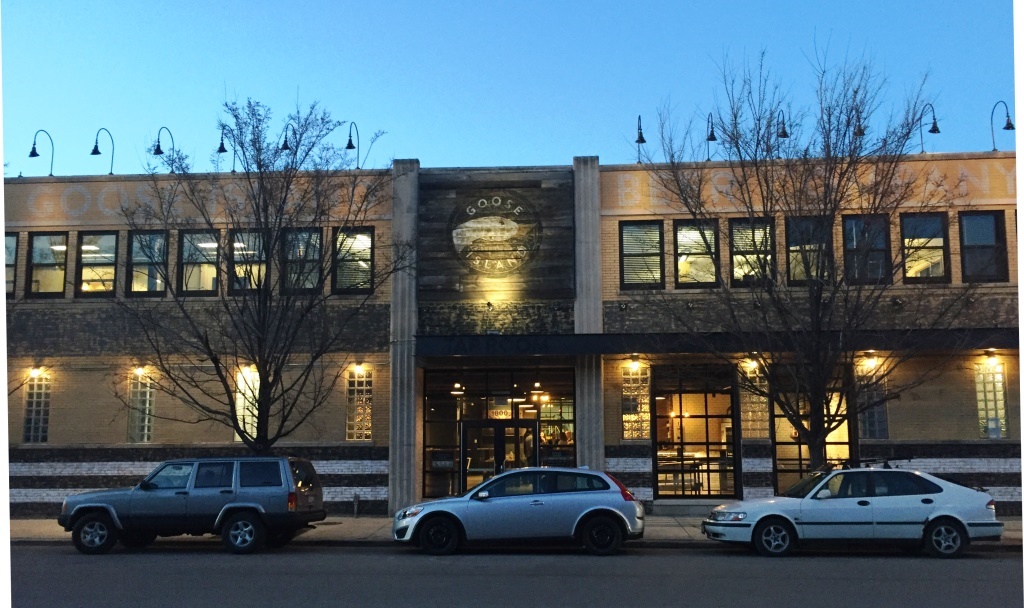 An evening of R&D exposed us to a promising first effort from the Goose Island Foudre Project.

We recently had an opportunity to sit down with the Goose Island folks for a little “R&D Night” gathering to sample some of the things they’ve been working on of late. Led by brewery head of research and development Mike Siegel, the team poured out a handful of different offerings over the course of the evening, and one of them made us really sit up and take notice.

The Goose team has been playing around with  foudres (EDIT: I prefer foeders as a spelling, but since Goose is using foudres then we will too. ) for a while now — big oaken vats generally used to age wine but being used increasingly for the development of wild ales. They’re reportedly up to nine foudres of varying sizes at the Barrel House on the city’s West Side, and one of the things they’ve been toying with is a wild Flanders Red type of beer.

We tried some, and you guys, it’s really good.

It must be, because this is the first brew they’ve actually deemed ready to release to the public. Head brewmaster Jared Jankowski gives the yea or nay on every release, and gave the yea on this one — and when you consider that he spent 7+ years at New Glarus (where they make such wonders like Enigma), we’re going to go ahead and assume that he knows a thing or two about wild beers.

And, per Siegel while discussing the experimentation process, “we reject a lot of beer.” This one passed muster with them, and definitely with us. 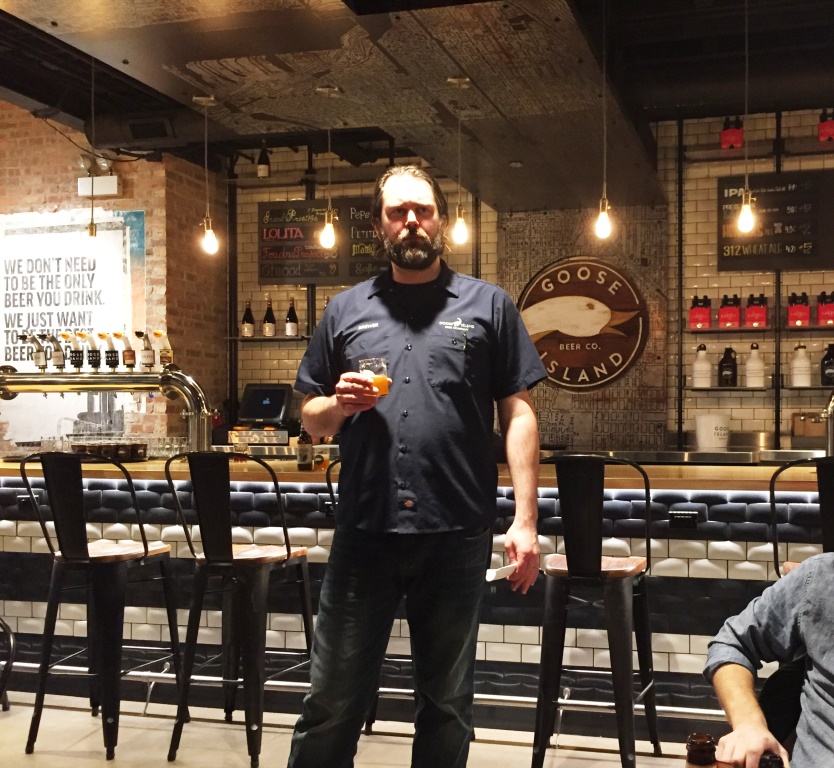 Also, the taproom’s lighting adds a sort of Frankenstein’s Monster quality to people. (In this case, Mike Siegel.)

First, the base beer (using the yeast culture from Madame Rose to “seed” the fermentation) spends six months of its life in the foeder, then spends another six months to a year in second-use Bourbon County Stout barrels. Over the course of the year the beer matures and develops into what we tasted: big bright acid tartness, some sour cherry and slightly-overripe-raspberry fruitiness along with notes of red wine vinegar (with maybe a touch of Benadryl at the finish).

It all comes together overlaying a nice rich sweet-roll malt character with some oaky depth as well — not too much, just enough to let you know it’s in the mix. I didn’t get any bourbon character from that long nap in those former BCBS barrels, but honestly, it doesn’t need it.

If I’m not making it sound awesome, consider this — If I’m being honest, the first thing that popped into my head upon my first sip was this: “Holy shit, this is like La Folie.” 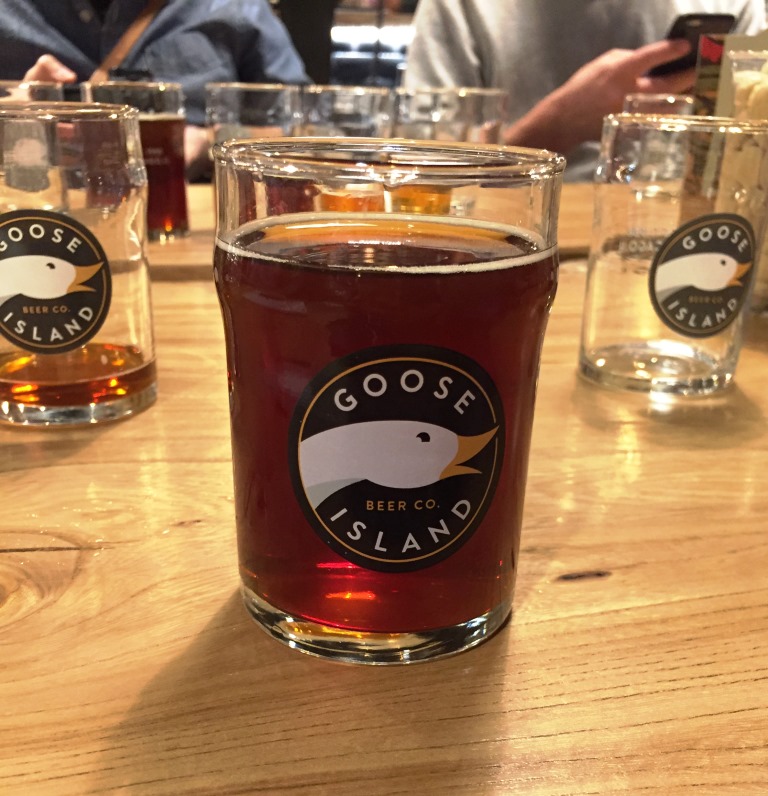 Take that as you will.

Other beers we tasted were fun but and occasionally rose above the “hey, pretty good” level of examination. The Fassinator Doppelbock, for example, was decent with some interesting white grape notes and sweet Belgian-tripel-y characteristics while retaining a snap of hop sharpness at the finish.

The Grand Prestige, brewed in collaboration with the Netherlands’ Hertog Jan Browerij (which is also ABInBev owned) is called a Strong Dark Ale or an Imperial Brown but lumbers into barleywine territory for me. Super-sweet bright brown sugar flavors swirl around some big breathy Belgian fruity yeast character and hot alcohol before wandering into a touch of chocolate syrup right at the finish. S’allright.

The first release from Goose’s Cooper Project, a partially-barrel-aged Scotch Ale lightly activated my pleasure centers with a big sweet caramel and toffee nose, light-to-medium body with a “Werther’s hard candy mixed with a dash of whiskey” flavor that opens up with notes of popcorn, vanilla and cola as it warms. A retail price of $15-$16 for a four-pack of this seems fairly reasonable, but I am holding higher hopes for the barrel-aged porter that we spotted a label come through for a few months ago.

We also tried the Brewery Yard Old Stock Ale, which as a history lesson was pretty awesome and as a beer was really a one-of-a-kind. This beer was released months ago so you can probably track down plenty of tasting notes elsewhere but I loved the big peach and apricot and barnyard must from the nicely aged, fully-brett-forward beer that was massively hopped and then allowed to mellow for months in barrels. Huge earthy, dirty, herbal, stale-bread English malt flavors with a twist of orange rind and crazy funky. Good luck finding some of this.

Beyond that, we sampled a fernet-barrel-aged stout which was chock full of mint, medicinal menthol, root beer, licorice, and sarsaparilla packed onto the base stout used for BCS. Fun as an experiment, but more of a novelty — nothing I’d tell you to stand in line for at a festival.

As always, since this is an advance look at forthcoming Goose Island brews, these samples were provided gratis at a guided tasting. This isn’t all the Goose team has coming, either — look for things like the 1060 Wit at a Wrigley Field near you as well as a DIPA brewed with orange juice — both of which should be fairly interesting.

Considering the strong Bud/Cubs connection, the decline of 312 Urban Wheat as a main Goose focus and the reported Blue-Moony-ness of the brew (with coriander and orange peel), I’m going to go out on a limb and guess that if the new 1060 Wit sells like hotcakes at Clark and Addison I wouldn’t be shocked to see it make its way out further.

Finally, as we were walking along Damen awaiting a bus, we spotted this cool old tied house. Anyone want to go in on a new near-West-Side beer bar? 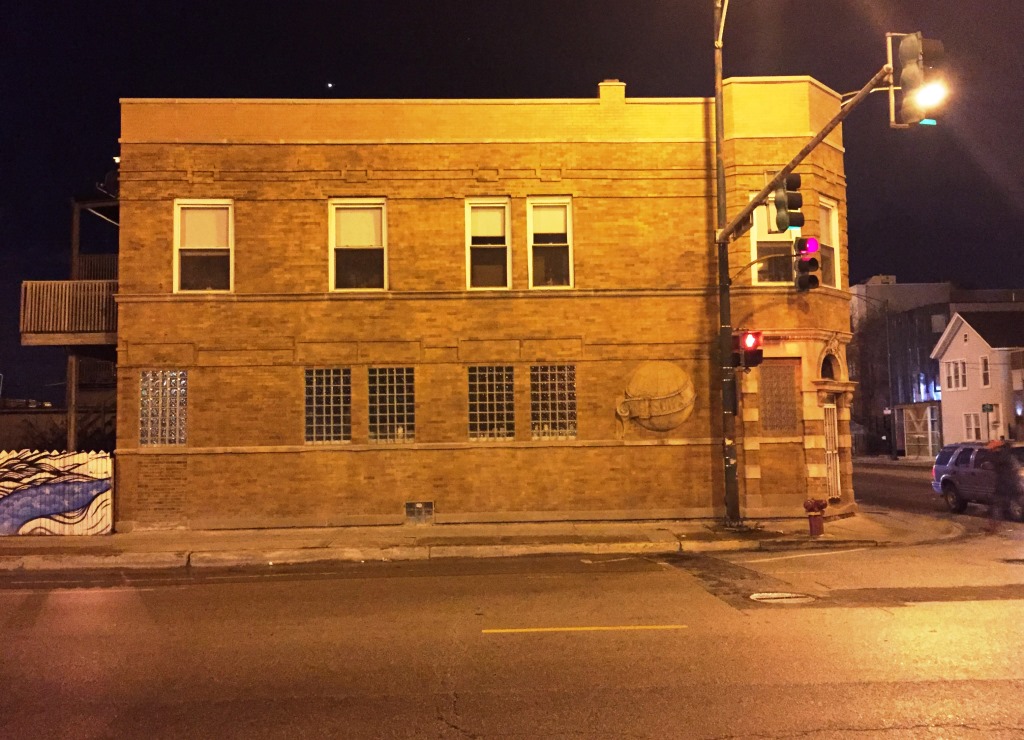