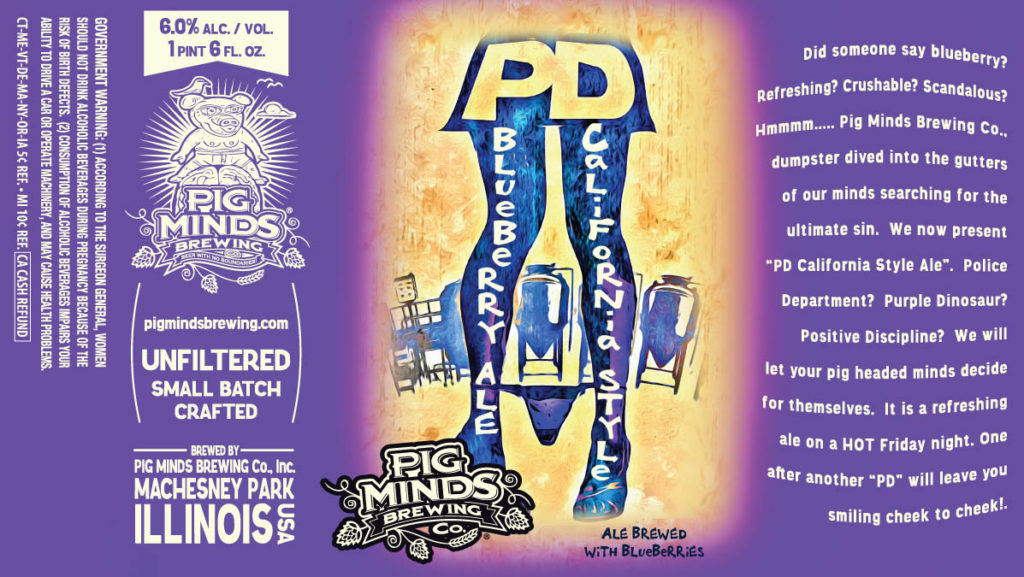 I’ve had some time to calm down and formulate some thoughts, now that it’s been a week since I first saw what I now consider to be the worst beer label ever produced.

So I have to ask: What is with these labels all of a sudden, and why does craft beer have a problem with women? 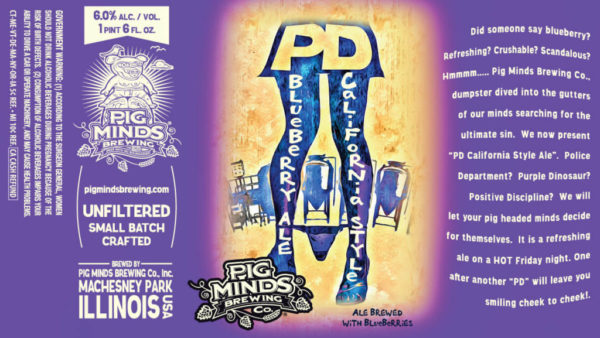 It is hard to know where to begin with the above. I’m not usually a very offend-able person, but for a vast number of reasons, the above piece of digital information really pissed me off. The above was created by a person. On purpose. With forethought and consideration, with effort put into creating the artwork, with the words strung into a very specific order, with the language used to make it legal for purchase and approvable by the U.S. Government, and submitted as a thing that a group of people must have honestly believed was okay.

(Quite possibly this is the same person or group of people who came up with beers called “Crazy Bitch,” “Donkey Punch,” and “Ester the Wild Bitch.”)

I suppose it was a lot of things all at once that pissed me off. The concept that a beer should be used as an agent into a person’s pants. The knees-together implied-scared stance of the person in question. The lowered panties in front of a row of fermenters. The jokey-joke cowardice of not even owning up to what whoever was behind this really meant, not being able to come out and just say what a “PD” was.

Even the fact that it’s a beer made with blueberries leads me to believe that somewhere along the way, someone probably chuckled and decided that this was a “chick beer” because it was, you know, fruity, right bro?

Above all those is this: I really, sincerely thought we were better than that.

“We” being the community of people who I’ve surrounded myself with for the past four years. Since you’re reading this, it probably includes you. I seem to have become something of a go-to person for the question of gender and craft beer; maybe it’s somewhat self-imposed, based on the long-ago decision to put the word “Guys” in our URL back in March of 2010.

I’ve had numerous conversations discussing the role of gender in the people who choose to drink craft beer, discussions at bars and with other writers, on the record and off, and throughout I’ve always insisted that this is a group of people that’s friendly; open-minded, not biased or bigoted, inclusive and welcoming to anyone who wants to play in our sandbox. It sucks to think that I was wrong.

As enlightened as I’d like to think we collectively are, I’ve also been told about the awful things people have said to one another in the course of drinking; reductive things, ignorant things, mansplaining and so on. At the same time, I’ve seen the ratios grow from the 99% beard-and-flannel crowd to recent events like the West Loop Craft Beer Fest, Beer Under Glass and Winter Brew where the ratio of women to men…I won’t say it’s 1:1, but it’s definitely way closer to 4:6 or so. I allowed myself to think that things were getting better. But then we see labels like this: 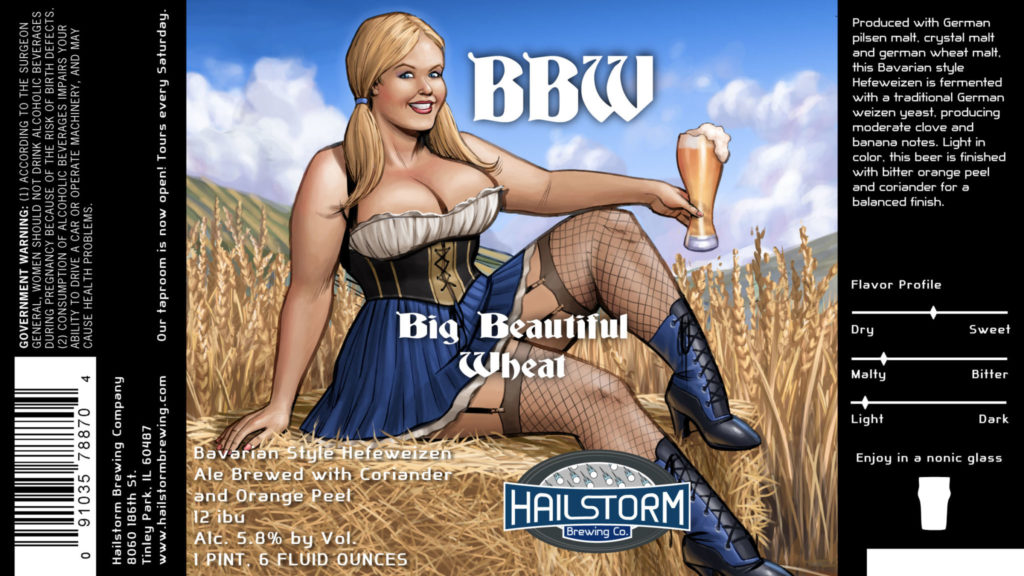 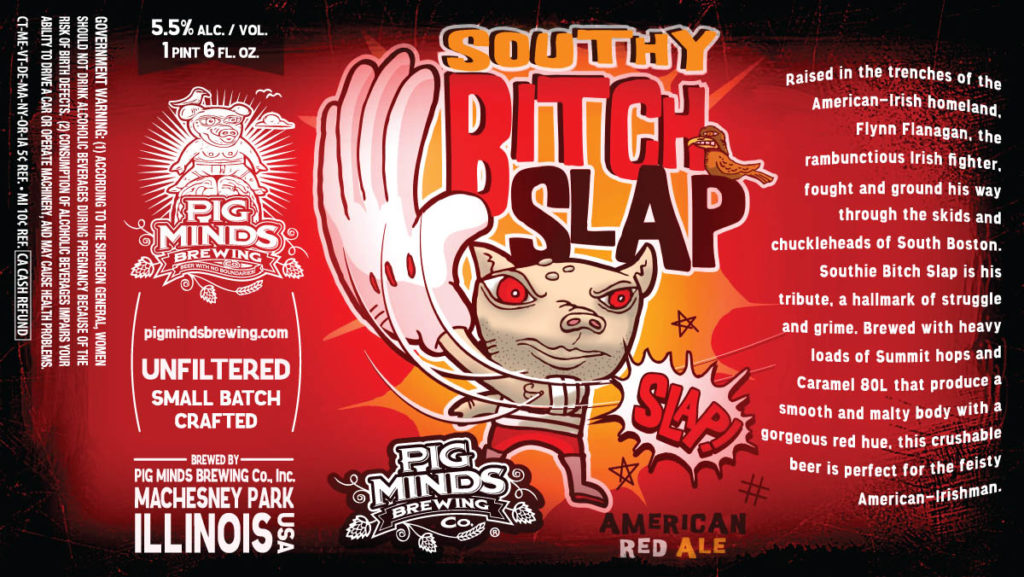 If I were a female, all of these things would say one thing to me: We don’t want you here.

Part of why I take this so personally is because it was a woman who got me into drinking quality beer — my wife. I don’t need to speak for other people here, but I know that most of us writing on this site have pretty pro-craft-beer households, women and men alike. One of us has a daughter. Would you feel right handing someone’s wife a beer with an AKA of Panty Dropper?

Would you be able to look your sister in the eye and hand her a bomber of Hefty-weiss and expect her to think that maybe they should give this craft beer stuff her brother is always talking about a try?

If someone at Anheuser-Busch or MillerCoors released that label to the TTB as a product they intended to sell, we’d be livid. We’d have no uncertain words for what we thought of their position on women. We’d start petitions, write thinkpieces about the sorry state of beer, we’d use it for decades to come as one of the shining examples of awful ideas in product naming. We should be equally pissed when a tiny brewpub outside Chicago does the same thing.

But wait, you ask!

Isn’t there anything set up to keep people from doing stupid things like this? As a matter of fact, there is. It’s called the Brewers Association’s Marketing and Advertising Code. You can read it right here. Anyone can. It’s actually pretty simple. A label looking out at you from a store shelf is doing its fair share of advertising itself to you, right?

You don’t even need to get past point number one to find this:

1. Beer advertising shall portray beer in a socially responsible way. This can include depicting people enjoying their lives and socializing while beer is present. Beer advertising and marketing materials should not:
• portray, encourage, or condone drunk driving.
• depict situations where beer is being consumed excessively, involuntarily, as part of a drinking game or dare.
• portray persons lacking control over their behavior as a result of consuming beer
• portray or imply illegal activity as a part of drinking beer
• make representations about unsubstantiated health benefits.
• claim or represent that individuals cannot obtain social, professional, educational, athletic, or financial success or status without beer consumption.
• claim or represent that individuals cannot solve social, personal, or physical problems without beer consumption

I don’t know, but representing your beer as something that can get someone drunk enough to fuck them sounds like portraying lack of control over behavior.

But wait, you ask!

Isn’t this a lot of effort expended over a stupid beer label? It’s just beer, right? Why are you taking this so seriously? Can’t you just relax? Aren’t you just giving these guys what they want? Free publicity? I bet they’re laughing all the way to the bank! And besides, other beers have women on the label! Other beers brewed by women, in fact! What about that! Huh? Anyways, people have been selling beer with sex for decades and using alcohol to get into people’s pants for centuries, so you shouldn’t make a big deal out of it.

All of these are paraphrased responses to my colleague Amy Cavanaugh’s piece on this same label, which she posted a couple of days ago.

Should anyone call me a “stupid bitch” that “just needs to get laid” as a result of this post, we’ll have come full circle.

Maybe it’ll take calling bullshit on this stuff to get it to stop. It probably won’t. I don’t underestimate the idiocy of the American consumer, but I do choose to put a flag in the ground here and say that I’m not cool with it. Alienating half your potential customers, as well as their friends, relatives, brothers, boyfriends, husbands, fathers and sons doesn’t seem like a good business plan, but then, I don’t own a brewery so what do I know?

(For what it’s worth, other brewery-related individuals have reached out privately to express their displeasure to us as well. Should they decide to stand up and be counted in public, we’ll support them.)

Who knows – maybe this even borders on mansplaining on my behalf. Maybe I’m white-knighting. Or, maybe, sadly, it might take a male saying this publicly to get through someone who otherwise would ignore all the other women saying the same thing I am.

I don’t claim to know where the line is drawn, and I don’t know how to get mad about one female-on-a-label over the many, many others out there. I’m just talking about this one, right here and right now. Also, it’s been about a year since we had to deal with the last round of gender/beer stuff, so why not dive in again headfirst.

I reached out to Pig Minds to get their explanation last Wednesday. I followed up on Monday. I’m still waiting. My only real question: Did you really think this was funny?

Why Does Craft Beer Suddenly Seem to Have a Problem With Women? was last modified: August 31st, 2021 by Karl