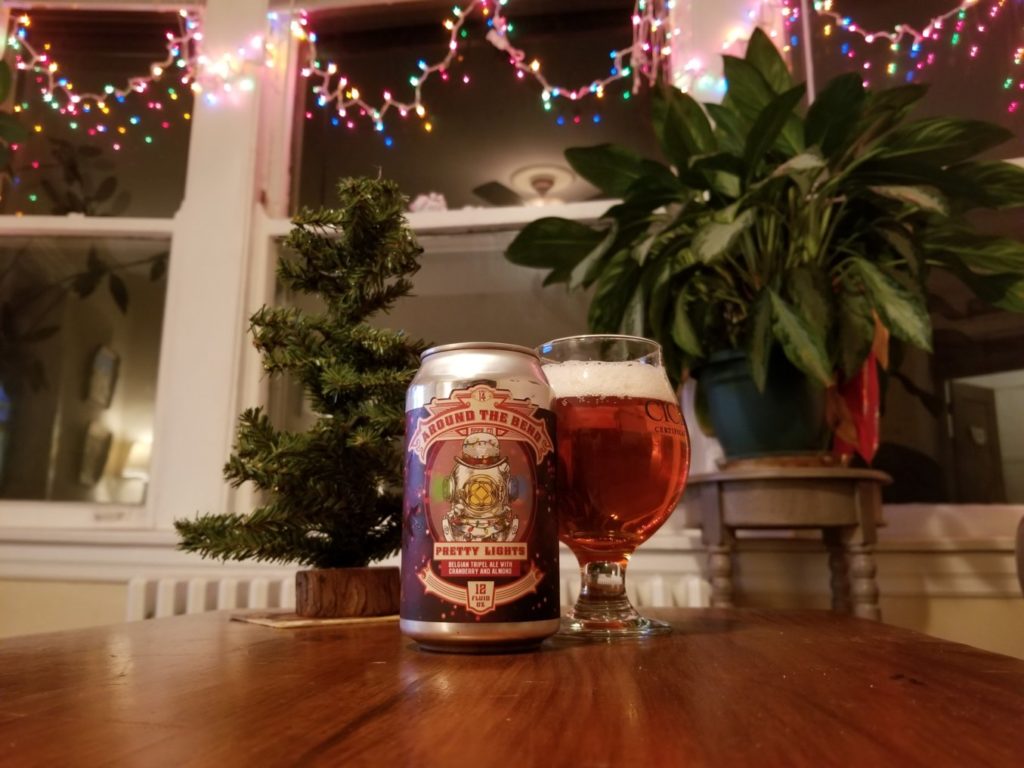 No fruitcake here — this holiday-season sipper breaks a couple rules.

As winter warmers or holiday beers go, my preferences are pretty specific. If you can make a beer better than Great Lakes Christmas Ale, I’d love to meet it, but until then that’s my longtime platinum standard for end-of-year seasonals.

After that, I skew pretty much as close to GLXA as I can — Dark Horse’s 4 Elf, the old Goose Island Christmas Ale, Schlafly’s Christmas Ale, even Harpoon’s Winter Warmer gets into the mix whenever I can happen across it (which is rare).

And as such I’ve been trained to expect and prefer a narrow band of flavors — cinnamon, honey, cherry, fig, plum, nutmeg, allspice, raisin and other fruitcakey things along with a bit of pine, all spread out on a deep plush bed of bready but clean malt character.

So a straight-up Belgian style holiday beer is a little out of my comfort zone. However, Around the Bend did a Pretty Nice job with their Pretty Lights.

Now, Belgian-style holiday brews aren’t really too out of the norm — for example, Paste Magazine regularly ranks those types of beers atop their holiday beer rankings, and offerings from St. Bernardus and Delerium regularly earn top honors, including this year. But for me…it’s just not what I usually go for.

Maybe they should be.

This tripel comes chock full of cranberry juice that’s fairly well balanced up against the base beer’s somewhat unrefined and raspy Belgian yeast character. Underneath that juice I get the feel of a tripel that’s spent some time at a state school and knows how to party, brah, but now has slapped on a holiday sweater and cleaned up a bit. Usually cranberry adds a sharp, acidic tartness that dominates a beer but that’s not the case here — it’s more juicy and sweet than you might expect, and plays quite well with the Belgian clove and spice notes underneath with a happily creamy mouthfeel.

You may have noticed I haven’t said much about the almond aspect of the beer — that’s because for me, it was lost beneath the more dominant voices in this particular beer choir, and truth be told I didn’t really miss it. If this is a Christmas carol, it’s one you’d hear at a Brian Setzer Orchestra appearance — loud, brash, a little all over the place but still based in some sense of tradition. Almond may be dancing in the background, but they’re not the swing dance partners doing those big flips and throws up front and center.

More From GDB:  Review: Goose Island Allium Roseus and the 1%

(Related: It’s not been a great year for beers involving almond for me, if you’ll recall how Goose Island’s Northwoods Stout fared in our BCS tasting.)

The real key here is how, like most Belgian beers, this one will play very well with food. I love my Great Lakes Christmas on its own so I can focus on all its many nuances of flavor — but Pretty Lights would go perfectly alongside a big plate of roast turkey, slices of ham, mashed potatoes, gravy, green bean casserole, dinner rolls laden with melting butter, and so on.

In fact, I might pitch this as a Thanksgiving seasonal next year.

More From GDB:  Snowed In With Shorts: "Freedom of 78" Review

Beyond that, it sounds like Around the Bend has some interesting plans for 2018, and if this is part of it next year I’ll be happy to have a few.

Transparency note: This beer was provided gratis by the brewer.

REVIEW: Around the Bend’s “Pretty Lights” was last modified: August 31st, 2021 by Karl