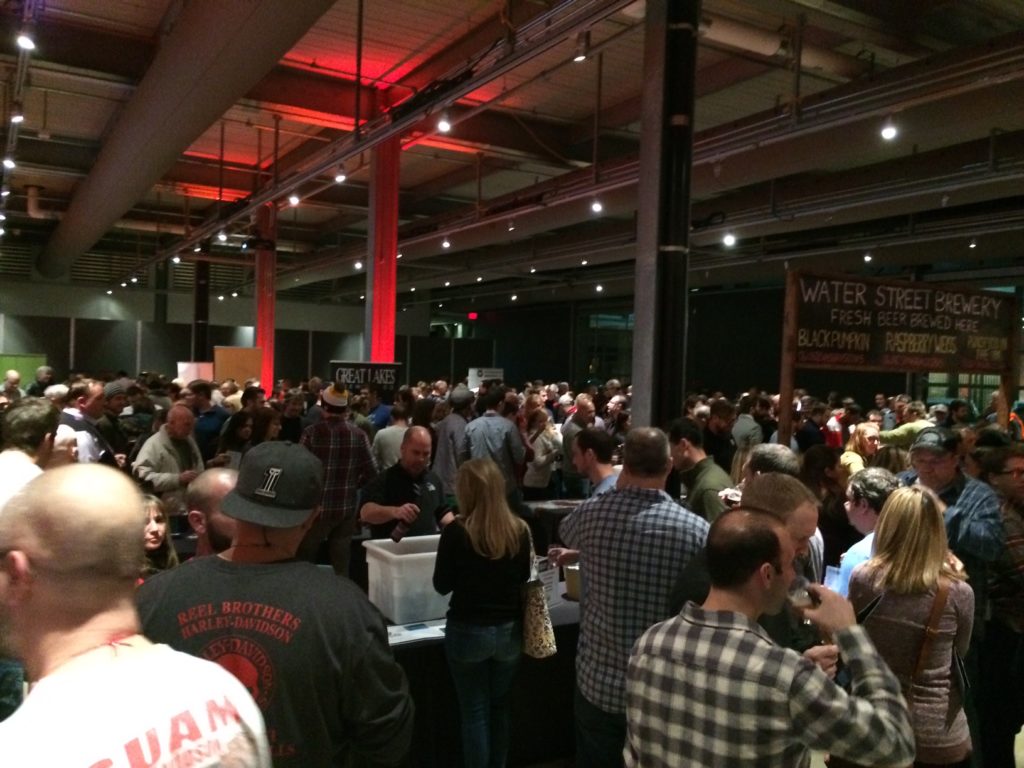 Black Friday has always meant spending at least a few early morning hours fighting the masses and waiting in chilly lines, all in the chase for an elusive prize – whether it was a low-priced big-screen TV, a rare Tickle-Me Elmo or variants of Bourbon County Stout. 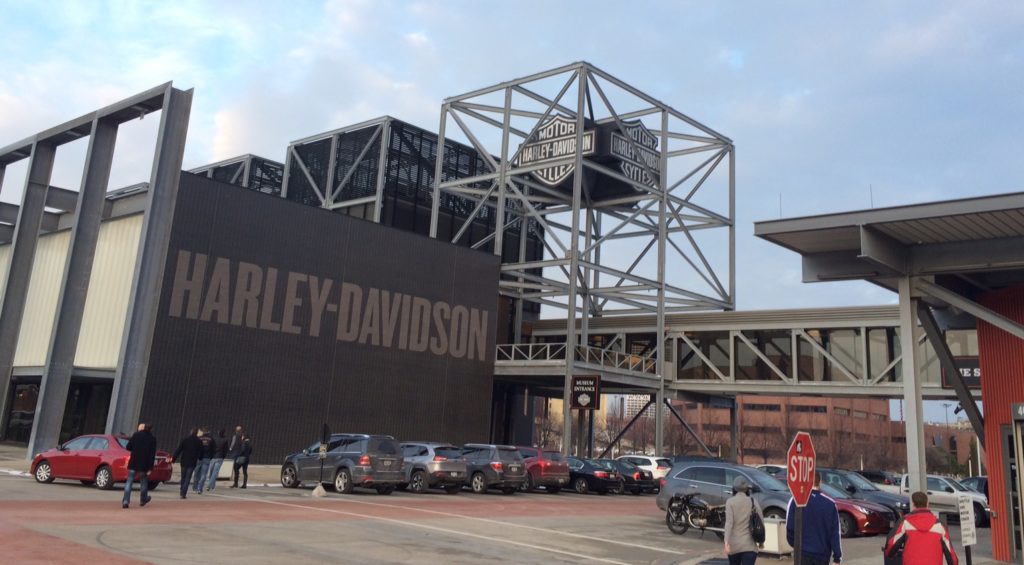 But this year, it also meant crossing the border and checking out the 3rd annual Black Friday Beerfest at the Harley-Davidson Museum. The draw, of course, was the chance to sample some of the beers worth “Crossing The Border For,” that Ben has introduced us to in recent months. And to do it in an iconic setting – unique for a beer festival. The ancillary benefit was having a great excuse for getting out of a trip with the Mrs. to Target or Wal-Mart. After snagging some Bourbon County in the morning, it was time to head north.

Though it’s only in its third year, this is a fest done right. Overseen by Wisconsin-based Brewfest Partners (which put on October’s Munster Ale Fest) it was an incredibly enjoyable fest for a few reasons. No long lines, dozens of Wisconsin-based brewers (and a few from neighboring states) and – perhaps best of all – knowledgeable people manning virtually every booth. Whether it was the owner, head brewer or sales rep, I was able to ask questions that brought informed responses, even learning a bit about the history of some of the breweries. And it wasn’t so congested that I was ever holding anyone up with a quick question – the vibe was relaxed and friendly, the game of bags and life-sized Jenga were abundant and though it was a full room, it was never uncomfortably packed. And those pouring the beer took pride in talking about what went into it or how their brewery came to be. It made for a great evening.

We made a point of sampling one beer from each brewery before zeroing in on our favorites. There wasn’t any hesitation nor debate – two distinct palates were drawn right back to Milwaukee’s Water Street Brewery. We learned a bit about the brewery – operating on the lower east side since 1987, it’s the city’s oldest brewpub and it’s growing – two additional Wisconsin sites, with a third to come. That means even more people will get to enjoy their incredible Raspberry Weiss. It’s not syrupy nor is it so tart that it makes you pucker. That’s probably because it’s made with real raspberries. The Black Pumpkin was anything but a traditional pumpkin beer – the smell was extraordinary and the taste was up there, too, probably because of actual pumpkin used, as well as the unique touch of vanilla beans that make it different enough to stand out. Their third offering, Punch You In The IPA, lived up to the name. It’s all hop punch. Those three combined to make this the best of the bunch for both of us. 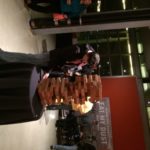 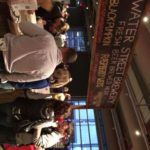 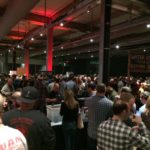 But maybe the most unique and complex beer we sampled came from Milwaukee’s Horny Goat and their Black Vanilla IPA. Dark malts, maybe even smoked ,with citrus hops, then a touch of vanilla – just a ton of stuff happening with that one. A close second on unique and fun offerings came from Brenner Brewing, barely 2 years old, with their Bacon Bomb Rauchbier. Smoked malts, pepper (but no bacon), owner Mike Brenner called it “the perfect chaser for a bloody mary.” Right he was. Look for big things from this upstart brewer. That’s because they delivered in the barrel-aged category, as well.

Several breweries rolled out their wood-soaked goods, with Brenner’s delivering a solid sour in its Maiden Opus, aged in wine barrels. Central Waters and Milwaukee Brewing delivered different beers soaked in Heaven Hill Distillery barrels. Central Waters offered a smooth stout, while Milwaukee aged its 2014 FOBAB gold-winning Louie’s Resurrection amber ale in those barrels. We left Wisconsin with a four pack of both. Sprecher offered a pair of aged beers, Czar Brew, an awesome Russian Imperial Stout aged in oak barrels, and its Commando, a Scotch ale aged in oak barrels. That was on top of their Hard Ginger, Root Beer and Abbey Triple.

Michigan’s Dark Horse and Chicago’s Goose Island came over for the fest, while Louisiana’s Abita also had a presence.

But maybe the most fun came in hearing some of the stories behind the beer. Like the folks at  Shorewood’s Big Bay Brewing, who brought a solid, hop-forward IPA with Long Weekend – the first beer they brewed, with a goal of creating “an IPA I could sit and drink two or three of,” they told us.

Or best of all, Melms Brewing Company, named after the first beer baron of Milwaukee. They were a late addition to the festival – not listed in the program – but spun a good yarn over even better beer. The great-great nephew of C.T. Melms brought a solidly sessionable Czechmate IPA, featuring three Czech hops and one of many  beers they’re contract brewing in Madison. Back in 1860, Melms was the king of beers long before Miller dominated the town. That was before Uncle C.T. sat on a pin, developed tetanus and died in 1869. Ultimately, they told us, it became one of many that was gobbled up by then-behemoth Pabst. We shared laughs over what future beer of theirs will include a reference to a pin or tetanus.

With a 4pm-7pm window, we still had time to hit the Friday fish fry in the classic beer hall at Lakefront Brewery, which is not to be missed. What an experience. Unfortunately, we missed out on their special release that morning – Black Friday – a barrel-aged imperial stout that is winning rave reviews and sold out in record time this year.

Before heading back south, there were the obligatory trips to Woodman’s, the Brat Stop and Mars Cheese Castle, but we also found time to pay for the tour at Sprecher’s – skipping the tour and instead going straight for the samples of award-winning brews like Acapulco Gold and Shakparo.  We also ventured to Jack Pandl’s Whitefish Bay Inn for garlic chips and Pandl Brau, a solid lager made specifically for that German restaurant by Stevens Point Brewery. 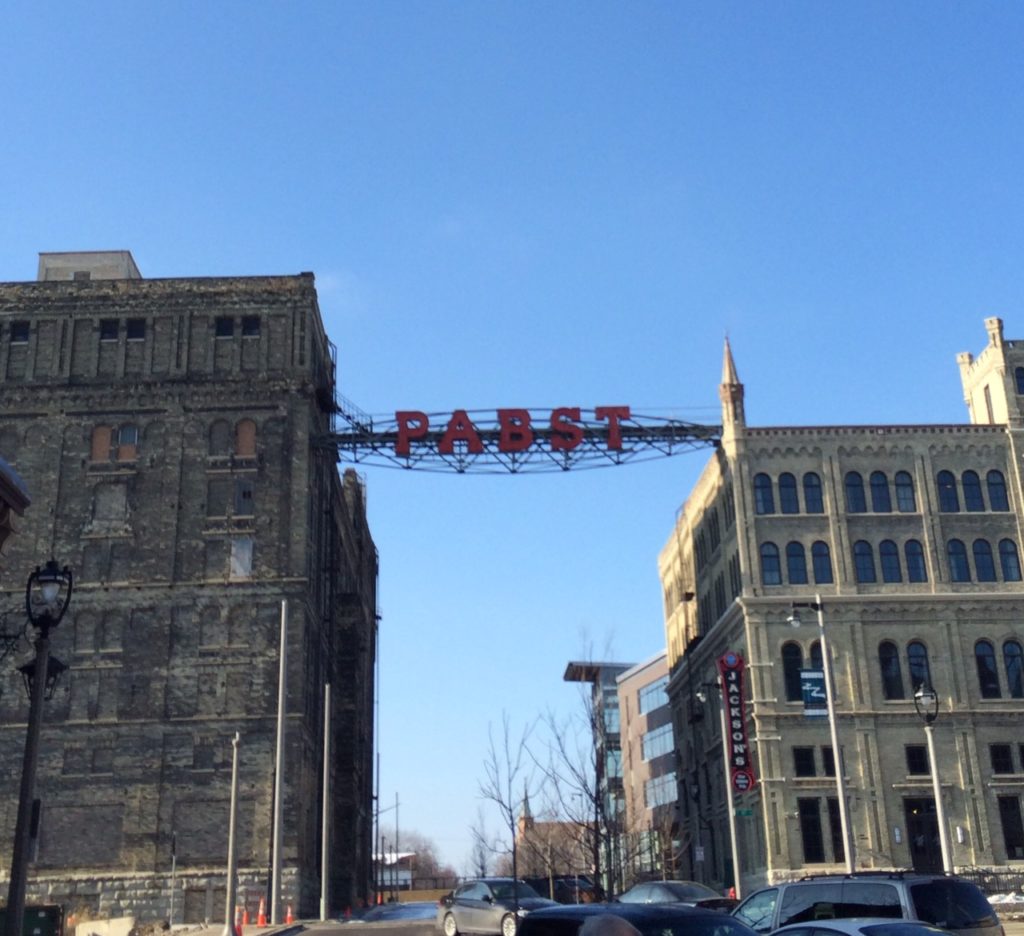 But I’d be remiss if I didn’t give a strong recommendation to visiting the Pabst grounds before leaving town. My companion, a former Milwaukee reporter who knows the area well, hadn’t realized the development that had come to parts of that mostly abandoned property. In particular, Best Place at the former Pabst Brewery offers a “tour” that had to be one of the best I’ve done, even though it featured no barley, hops or peeks at production. A look back through the history of Pabst, through its rise and demise, was worth the $8 alone. The free pint of PBR or Schlitz was an added bonus – as was the incredible architecture of what were once corporate offices but which are now a party and reception hall known as Blue Ribbon Hall. Though Pabst is now contract brewed by MillerCoors, the company that owns the brand allows Best Place to sell merchandise – everything from cheesy 80s posters and original stock certificates to T-shirts and hats of all the current Pabst brands, from Colt 45 to New Bohemian, Hamm’s to Stroh’s. Just strolling through those halls, hearing the history and admiring the structures is worth a quick diversion off the beaten path.