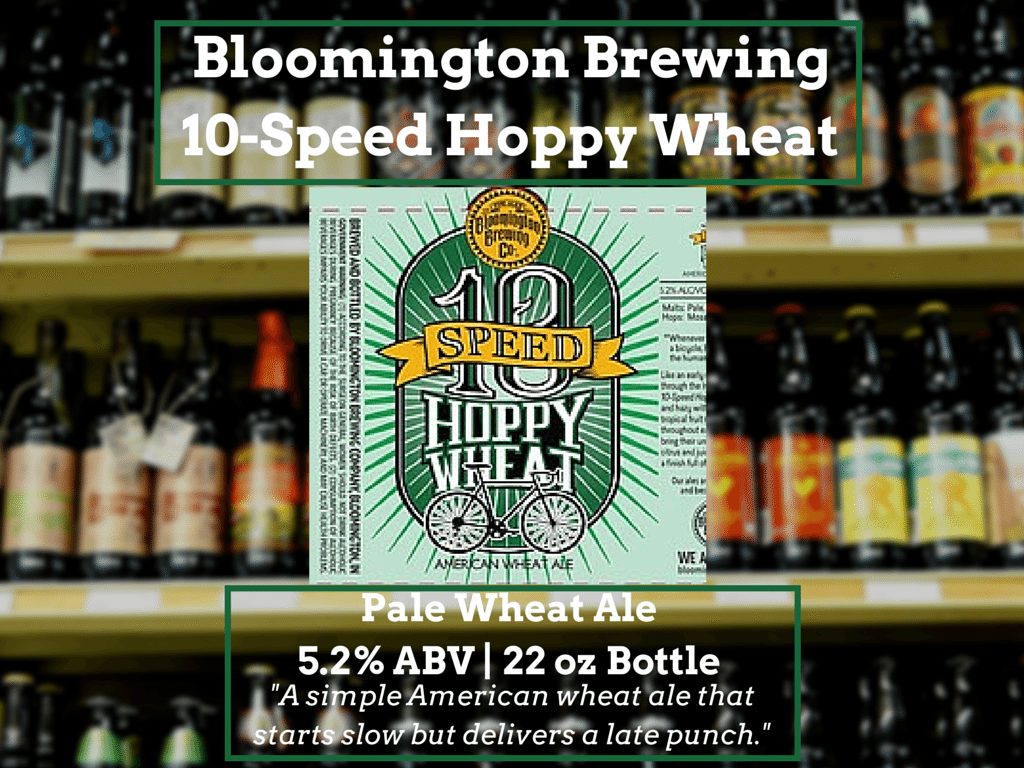 This week’s Craft Beer to Cross the Border For sends us into Indiana to sample Bloomington Brewing 10-Speed Hoppy Wheat. It’s only been on store shelves for a little over a year but has quickly captured the palates of craft beer drinkers in the Hoosier state.

Just a few months later, Hoosier Beer Geek had declared it the state’s “Best Beer of 2013.”

Yes, it’s that good – and comes without the hype you might expect.

It’s a simple American wheat ale that starts slow but delivers a late punch with an infusion of Mosaic hops.

10-Speed produces a thin head, with mild carbonation and appears thin – but the taste is anything but thin.

As I took note of the tremendous blend of citrus and bitterness, I scanned the bottle and found BBC touting the same.

“Mosaic hops bring their unique aromas” – they sure do.

I finished the bottle unsure whether those citrusy notes leaned more toward lemon or grapefruit (or maybe even mango?) but did notice a subtle grassy aroma that came through toward the end.

This is an incredibly well done beer that has the hops needed to attract IPA fans, yet balanced well enough that wheat fans will enjoy it just as much.

If you’re venturing down for a Hoosiers game, you can find BBC inside Lennie’s Pizza – just off campus and home of an incredible pizza and calzone. Now in its 20th year, BBC was one of Indiana’s first breweries and the first brewpub in Southern Indiana. Co-founder Jeff Mease led the charge in the early 1990s to reform state laws for craft brewers, which has allowed dozens more breweries to open their doors in Indiana.

Raising a glass of 10-Speed Hoppy Wheat is a great way to say thanks.