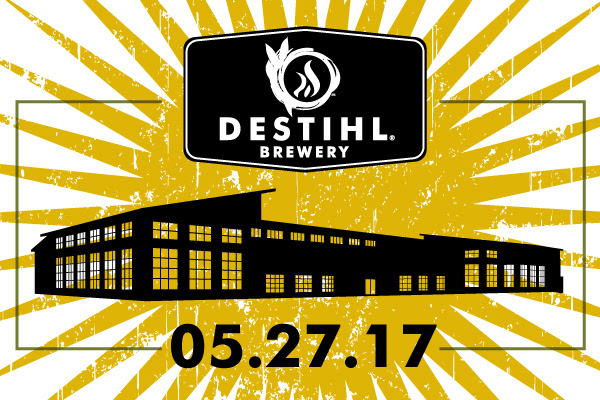 We’re just weeks away from the public’s first look at the new DESTIHL brewery expansion.

When we last checked in with DESTIHL’s CEO/Brewmaster Matt Potts, he told us they were basically bursting at the seams in terms of existing capacity and quite ready to get going with production at their new megamillion expansion plant in Normal.

Brewing operations moved over last month — nearly ten years after originally opening in November 2007 — and for the general public, the date they’ll pull back the curtain is set for May 27th.

The facility more than doubles their existing capacity, jumping from 10,000 bbls at their original location into an immediate 25,000 bbls on day one, with room to go up to 150,000 bbls over time. They’ve also got special setups for their main brewing operations, a separate sour kettle brewhouse and even a 10bbl pilot system setup to mess around with. They’re calling it “the most unique ever built by [Wisconsin’s] Sprinkman” brewery manufacturer.

So if you love DESTIHL’s straightforward beers like their Vertex IPA and Abbey’s Single, or the many, many soured options they’ve been producing for years, you’re about to get a whole lot more of ’em.

And if this means more of their award-winning Dosvidanya Russian Imperial Stout — which we have a hunch it will — then we’re on board.

The brewery’s, located on 6 acres at 1200 Greenbriar Drive, plans to open its new Beer Hall to the public on Saturday, May 27, 2017. The 6300-sq.ft. Beer Hall, which is the public portion of DESTIHL’s massive 47,000-sq.ft. new brewery, will accommodate well over 200 guests in a communal setting inside the long, open, brick-walled hall reminiscent of the industrial brewery age. From the Beer Hall, guests will be able to see into the brewhouse, cellar and packaging areas and watch their beer being made while enjoying DESTIHL’s already renowned beers and new pilot/experimental beers brewed right on-site. A variety of tours will also be available, ranging from a choice of free or paid daily tours as well as periodic ‘Brewers Tours’ which will conclude with a beer & food pairing featuring culinary creations from DESTIHL’s chef. The Beer Hall also has great views of the adjacent lake via large glass garage doors that open to two large patios on the south side of the brewery which can accommodate an additional 200-300 people.

The Beer Hall will also feature an entirely different and more condensed food menu as compared to DESTIHL’s two very successful brewpubs in Normal and Champaign. The brewery menu is fun, casual and innovative, while staying true to the company’s motto to Support Flavor – Boycott Bland. Details of the menu will be publicized at or near the time of opening. Both brewpubs will continue to operate at their top-rated, full capacity of serving hundreds of guests daily and brewing on-site at those locations.

DESTIHL Brewery received federal and state permits to move to the new facility a few weeks ago, and all beer and brewing equipment was quickly moved from the former brewery on General Electric Road in Bloomington before the end of March, including over 650 of its oak barrels and foudres now housed in new brewery’s twostory barrel house. Brewing then commenced at the new brewery two weeks ago on a new, highly specialized 60-barrel 3-vessel brewhouse, a 240-barrel sour kettle brewhouse and a 10- barrel pilot brewhouse, all manufactured by W.M. Sprinkman Corp. of Wisconsin. This system, the most unique ever built by Sprinkman, is capable of brewing more than 150,000 barrels of beer annually, although initial fermentation capacity will be 25,000 barrels annually, which can be scaled up rapidly as needed to meet demand. The brewery also invested in a new centrifuge and a CFT canning line capable of filling 110-220 cans per minute.

DESTIHL’s expansion is being driven by heavy demand for its unique portfolio of beers, both locally and in all 19 states where its beers are currently distributed as well as in many other markets presently wait-listed by the brewery for over a year. This expansion will enable DESTIHL to vastly increase production of its wildly popular, award-winning Wild Sour Series(tm) beers, including Here Gose Nothin'(r), and other growing brands like Dosvidanya(r) Russian Imperial Stout (winner of the Bronze Medal at the 2015 Great American Beer Festival(r) in the ‘Wood- and Barrel-Aged Strong Stout’ category and the Gold Medal Strong Porter/Stout & ‘Best in Show – Winner’ and Runner Up-Best in Show at the 2015 & 2016 National Wood-Aged Beer Competition held in Chicago at the Festival of Barrel Aged Beers, ‘FoBAB’), Vertex IPA(r), Weissenheimer(r) Hefeweizen, DeadHead(r) Imperial Red IPA, Saint Dekkera(r) Reserve Sour Ales and its many other beers.

“Building this new production brewery has been part of our long-term business plan since we opened our first brewpub in Normal in November 2007, so to see it now almost completed is a dream come true for our dedicated team at DESTIHL and a great reward and milestone for the years of success for our company”, said DESTIHL’s Founder and CEO, Matt Potts. “Much like our brewpubs have become culinary destinations, this facility will be an exciting destination brewery for both our local community and for visitors from around the country, while providing a permanent home for years of growth.”

DESTIHL broke ground on the facility last June and will employ about 100 people. The company already employs over 180 people between its existing two brewpubs in Normal and Champaign, Illinois, and from its prior production brewery in Bloomington. The site in Normal was chosen for its great visibility, size and accessibility. Further details about the facility, including Beer Hall offerings, hours, tour availability, employment opportunities and other frequently asked questions, are on the company’s website at www.DESTIHLbrewery.com.

DESTIHL opened its first gastrobrewpub (DESTIHL Restaurant & Brew Works) in Normal, Illinois, in November 2007 and added its second gastrobrewpub in downtown Champaign, Illinois, in April 2011, where the company focuses on both artisan food and beers. The company’s original production brewery in Bloomington, IL commenced operations on May 31, 2013, but production was moved to its new facility in Normal, IL in March 2017. DESTIHL Brewery combines centuries-old, global brewing traditions and new American craft brewing ingenuity & artisanship to produce a wide array of beers for every palate. The result is a diverse offering of intensely flavorful beers that are anything but bland. The brewery currently distributes its beers in Arizona, Arkansas, Colorado, Florida, Illinois, Indiana, Iowa, Louisiana, Michigan, Minnesota, Missouri, Nebraska, North Carolina, Ohio, Oklahoma, Pennsylvania, Tennessee, Texas and Wisconsin with availability in Washington, D.C. as well.

Editor’s Note: We receive a ton of beer-related press releases, but we’ll only bring you the ones we think are relevant, fun, interesting, cool, newsworthy, or offer something we’d be interested in checking out ourselves.

The DESTIHL Brewery Expansion Has an Opening Date was last modified: February 6th, 2018 by Karl