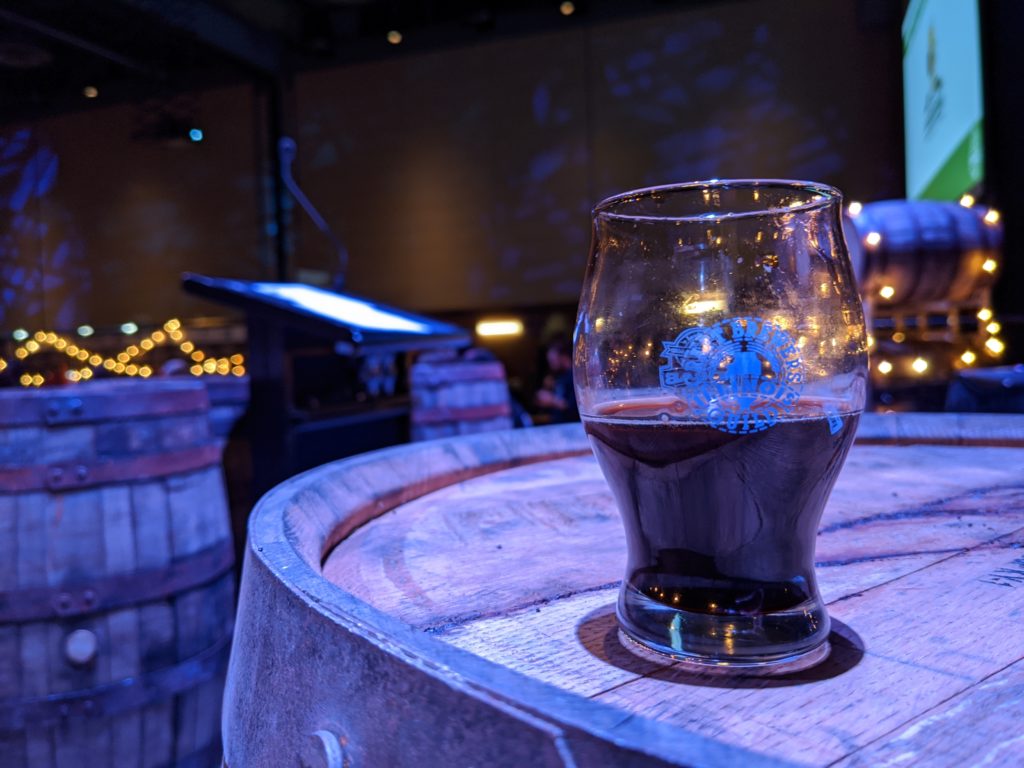 Another year of FoBAB is in the books.

As we get close to 20 years of FoBAB (and many years of covering it here), the bar seems to finally be raising when it comes to barrel-aged beers.

Over the years we’ve had a lot of hits, but just as many (if not more) misses, trivialities, outright failures and some plain old weird beers that we wouldn’t be rushing back to. But of the beverages we sampled this past Saturday afternoon, folks seem to finally be getting better at this whole “put beer in a barrel and see what comes out” thing.

Some random takeaways from this year’s event:

The crowd figured out some of the big hits quickly at my session — even before the awards were announced, eventual Gold Medal winner Vanilla Rye Here Be Monsters from Cerebral Brewing kicked quick. In fact, it was the first thing I saw tapped out all day.

Among the best beer names: the “Chicago Party Aunt” sour from Two Brothers.

The volunteers were clearly primed for a rush on Phase Three Brewing Company‘s barrel-aged Curvature stout with coconut, vanilla and cassia — they had three people pouring it at once until it kicked, which was pretty quick. And it was fine! Not great, but pretty good in a room full of pretty good stouts. But hypers gonna hype.

I genuinely love that every time Pete Crowley from Haymarket wins a medal — which is basically every year — they play Ozzy Osbourne’s Mr. Crowley when he takes the stage.

Untitled Art was pouring a “Double Barrel Iced Barleywine” that clocked in at 18.35%. If you’ve ever seen a stronger beer at FoBAB I’d love to see it (but probably not try it because good lord that’s crazy).

Destihl was pouring a beer called Chickowsvidanya that is apparently a collaboration with Listermann even if it wasn’t listed as such on the placard. Anyways, it was only okay — with a name combining two previous major FoBAB medal winners (Chickow and Dosvidanya) you’d better knock it out of the park, and this one didn’t.

One beer that I’m still puzzling over whether or not I liked it — Begyle’s Baklava Imperial Pajamas tasted like a stout with a whole bunch of amaretto added to it. I’m pretty sure I liked it even if I didn’t actually get any other baklava flavor. That said, it seems like a great and underutilized pastry choice for an adjunct stout if anyone else wants to take a swing at it.

Pouring just two beers down from the Phase Three beer was my hands down favorite stout of the night: Pure Project’s Corylus w/Vanilla. Old Irving’s Trevor Rose-Hamblin hipped me to this very early in the session and I tried both beers they had on hand. That Corylus stout was just awash with big chocolate fudge and vanilla flavors in a body so creamy I’d have sworn it was on nitro, not dumped from a pitcher. Genuinely wonderful.

There you go — another year in the books. This was also the first year for ABV Chicago’s FoBAB Fantasy Draft, where we ended up squarely in the middle. I am still kicking myself for not taking Pollyanna earlier but I’m pretty pleased that Hacienda grabbed a medal this year. Looking forward to that next year (I’m already updating my spreadsheet!) and here’s to an even better array of beers for 2020 after a nice and strong year this year.