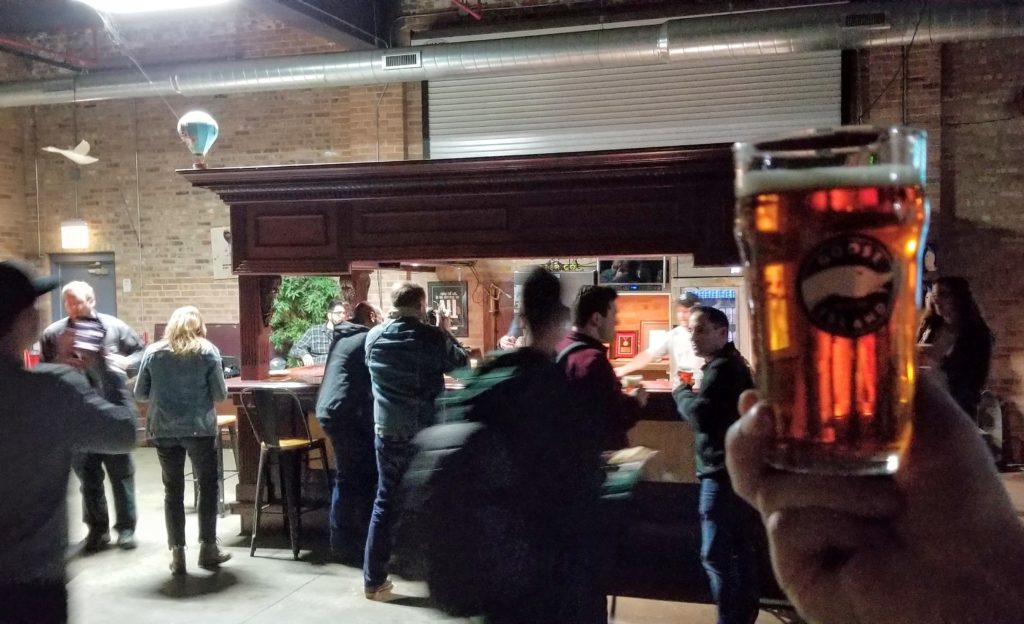 After the recent Bourbon County Stout tasting at the Goose Island Barrel House was about complete, Goose president Todd Ahsmann announced to the group of beer writers and media types that they had a little surprise for us.

Not only was the evening’s tasting not quite over yet — but it was to conclude at a place that beer drinkers have sat and sampled Goose Island beers since day one.

But first, we had to walk all the way through the barrel facility…

Which was quite a hike…

But eventually we reached …

Well — to be accurate, about half of the bar still exists.

After ABInBev took over the brewpub, they renovated it and converted it into a taproom, — a decision which resulted in the removal of the original pub-style bar that would be equally at home in an English inn as it was on Chicago’s near north side. (The current bar may be more functional, but … it ain’t quite the same.)

So, I wondered at the time — What would happen to the bar that taught a generation of Chicagoans how to appreciate craft beer? Did A-B have any sense of history or did they pitch it into the trash without a second thought? Would anyone ever be able to drink a Bourbon County Stout at the same slab of wood that held the first batch?

Thankfully that question has now been answered.

About half of the bar juts out from one of the walls of what is basically an employee breakroom, which is also home to a skate ramp among other various pieces of brewery detritus. There are just two handles pouring beer back there nowadays — one of which was Honkers Ale, which is only just and proper and right.

(If you thought it was a bit weird for me to be drinking Honkers at the OG Clybourn bar, since I broke the news of its relative demise, you’d be right! But we were also 8 snifters of BCS deep as well. So that helped.)

They were also pouring a Fernet variant of BCS, which I didn’t try because ew no.

Plus. Honkers! At the OG Clybourn Bar!

And as someone who still carries his original MBA (Masters of Beer Appreciation) in his wallet you better believe I broke that out:

Is Honker’s Ale still a really nice English-style bitter? Certainly is. Was I entirely comfortable having the president of Goose Island wiping down the bar and pouring me beers (“Old habits die hard,” Ahsmann said as he made the rounds with a pitcher of Honkers, topping everyone off)? Absolutely not.

Will many people ever get a chance to hang out here? Almost certainly not. Does it matter that the heart of the original brewpub, the Goose Island Clybourn bar — one that has seen perhaps the most significant part of Chicago craft beer history — still exists in some form?