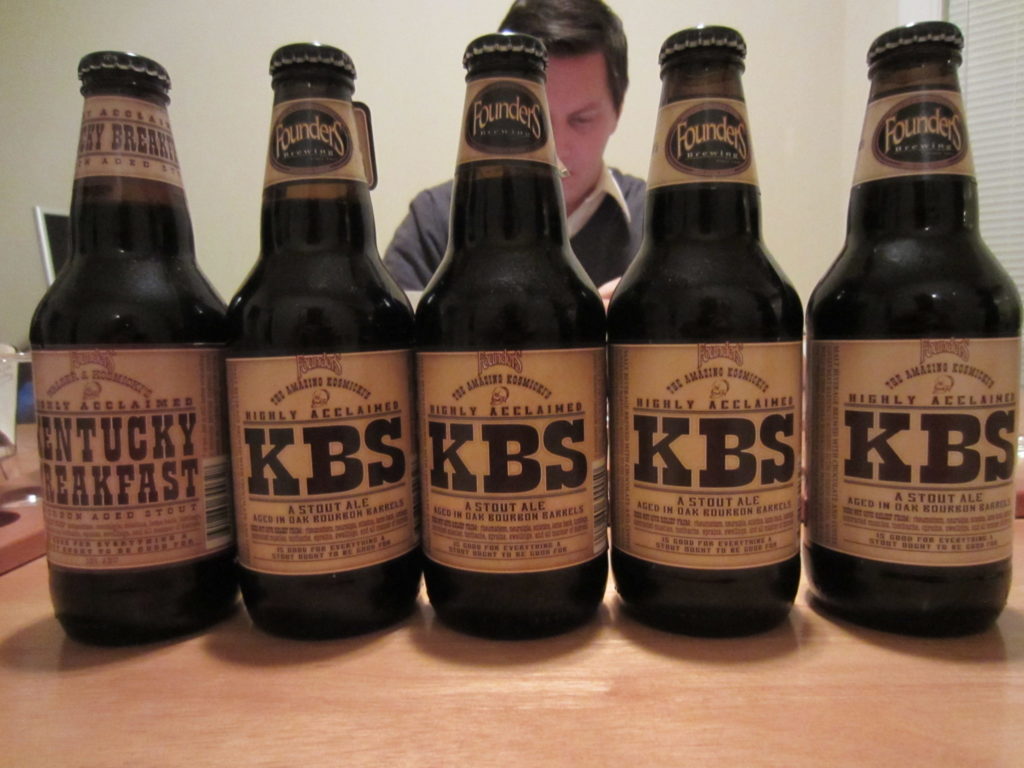 “What we’ve got here is an imperial stout brewed with a massive amount of coffee and chocolates, then cave-aged in oak bourbon barrels for an entire year to make sure wonderful bourbon undertones come through in the finish. Makes your taste buds squeal with delight.”

Ryan: To say this vertical has been a long time coming is an understatement. Those of you who have tried to scrounge up even one bottle of Founders elusive KBS in the last few years knows how hard it can be.

When we first began this endeavor, two years before we began this site, Founders KBS was still called Kentucky Breakfast Stout. It also wasn’t as impossible to find as it is now. 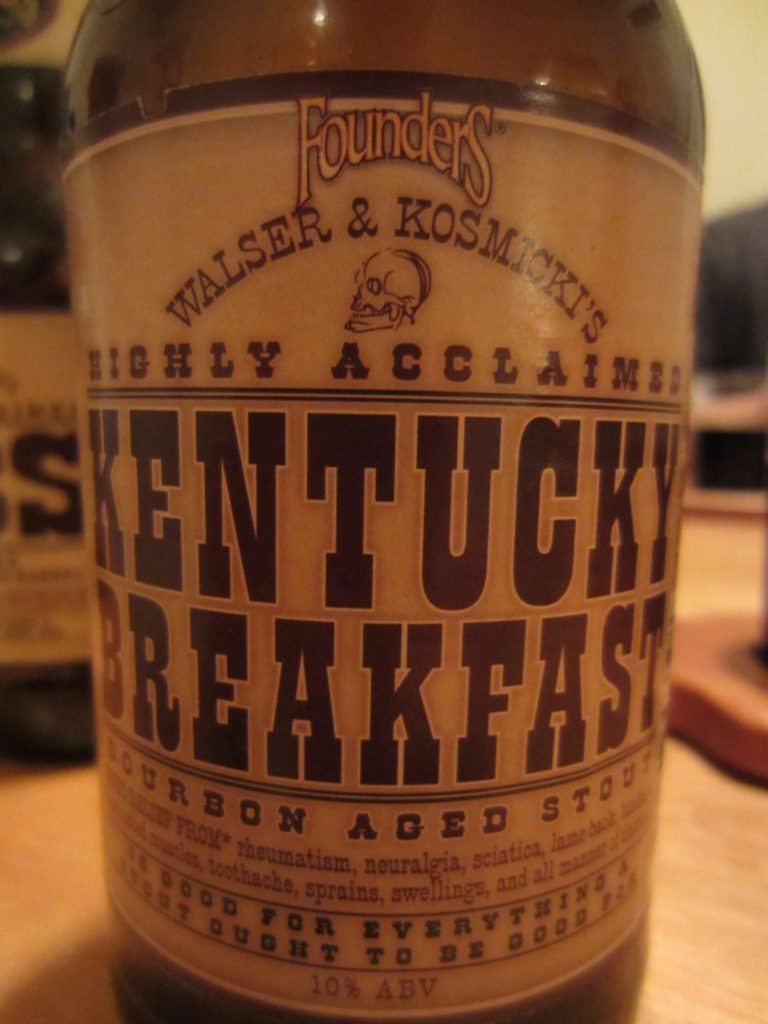 It was 2008, the early years in my craft beer renaissance, and my Sherpa at the time was a once-regular character here nicknamed “frequent commenter Ben,” for obvious reasons — he frequently commented on our reviews. In 2008 he worked at a beer store along the Southport Corridor, and it was FCB who encourage me to pick up a four pack of KBS when it was released in the spring of 2008.

At the time, I had no clue what a Kentucky Breakfast Stout was — but I trusted my craft beer Sherpa. So I plucked down the $22 for a four pack.

Two of the four were consumed. In fact, I believe Karl was the lucky recipient of one of the two bottles, and the other two were stored away. Not because I had any grand plans for them, but because I didn’t want to drink them right away.

So they sat. And sat. And sat. Until the 2009 release of KBS where, again, FCB helped me secure a four pack. Rinse and repeat. Drink two, hold onto two. Again, no rhyme or reason, just because.

It wasn’t until 2010 that my interest in craft beer really began to hit its stride — and this beer became a heck of a lot harder to find.

As we were prepping to launch this site we thought, “wouldn’t it be really cool if we drank one of those 2008 bottles, and a 2009 bottle AND a 2010 bottle…and wrote down what it tasted like?!?” So that’s what we set out to do, everyone keeping their eyes and ears peeled for KBS when it was released.

And it came and went in the blink of an eye. We got nothing.

Our saving grace came in a work trip to Paducah, Kentucky – home of Roof Brothers – a Binny’s of the South, if you will. Not only was I able to find a few bottles along the way to cellar, I also purchased a growler fill of KBS at Roof Brothers.

A week later we sat down for a much-anticipated three-year vertical of Founders KBS.

The last two years proved to be much harder to secure a single bottle, let alone a four pack. In fact, we didn’t even bother trying any of the bottle shops in Chicago. Those bottles of KBS were already spoken for, reserved months in advance.

Last year we were forced to trade for a bottle with one of Andrew’s friends who lives in Georgia. This year I had to reserve one at a beer store in Kalamazoo, MI to pick up on another work trip.

But we did it.

And, strangely, this has almost become more about the journey than drinking the beer. Think about it; we searched and scoured and made phone calls and traded emails trying to find one bottle of beer, every year, around St. Patrick’s Day — for five years.

Was it worth the anxiety, headaches, time and money? You bet it was. 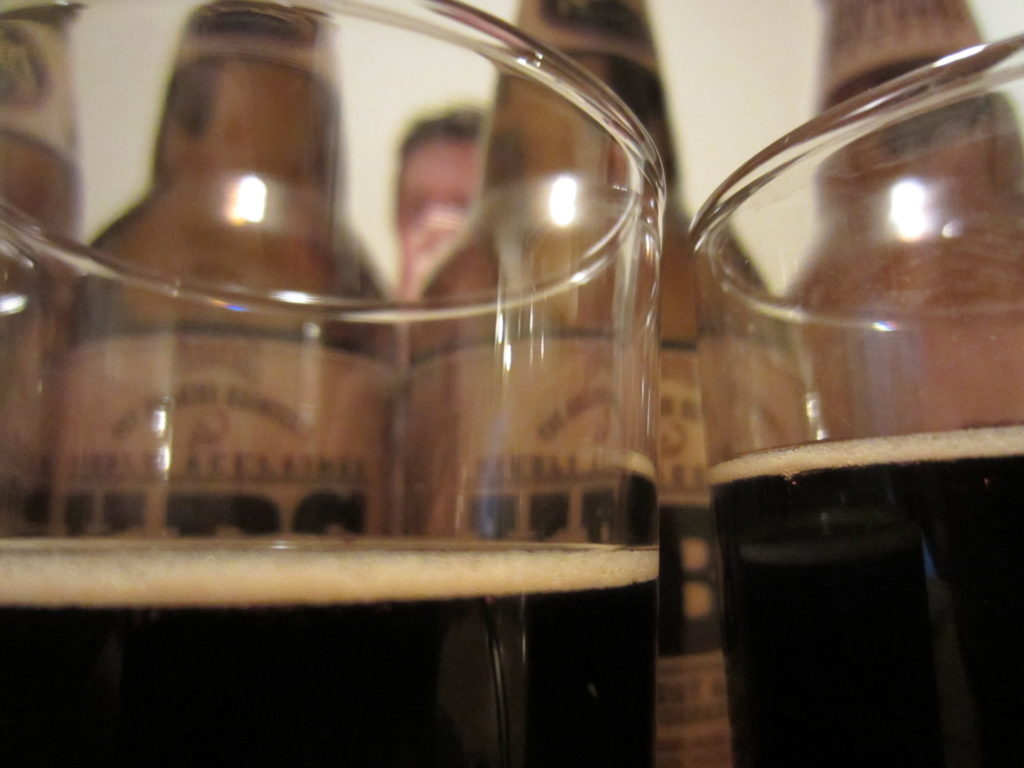 Each beer, split between four people and poured into 4 oz taster glasses, appeared pitch black in color with varying degrees of khaki tan head. Working our way from left to right, we begin with the 2008.

The nose gives off weak scents of milk chocolate, star of anise and coffee that’s been sitting in the pot for a few hours. Kind of sounds underwhelming, but it’s not, especially for a beer that is five years old. Take a sip and you’re hit with bold flavors of milk chocolate, heavy cream, vanilla and peanut brittle. Strong, bitter coffee highlights the finish along with just a hint of soy sauce.

The 2009 sample featured much sharper carbonation than the 2008 and far less chocolate. Instead, it was smokey and dry with a heavy dose of German dark chocolate on the finish.

The carbonation was even sharper in a 2010 sample. It was also thicker and creamier than the previous two pours. Velvety, almost. Smooth milk chocolate, molasses and milk sugar dominate.

You’ll notice that, in the previous three beers, there was no mention of bourbon. Sure, there were flavors that you would expect to accompany barrel aging, but no actual bourbon flavor. Until now. The 2011 pour is chalked full of oak and vanilla and bourbon, oh that sweet bourbon.

Finally, a fresh bottle, the 2012. Similar to the 2011 it’s highlighted by oak, vanilla and overwhelming bourbon flavors. Sure, there’s some chocolate and coffee in there too but the bourbon masks it all.

Did I have a favorite of the bunch? Actually, no. I enjoyed each bottle individually, both for the lengths we went to in order to find it, and what was inside.

’08: Man, for a beer brewed during the waning days of the Bush presidency this still has quite a lot going on. Bold peanut butter flavors jump to the forefront with none of the usual hints of funk or off-notes one often sees from a long-cellared beer. Most everything you want from this beer remains present, just augmented; it opens up as it warms and ends quite mild, allowing some extra roasted flavors to emerge.

’09: Much more coffee present here, and the most notable flavor you’ll notice. Quite a bit thinner than the younger years; this must be where the body starts dropping off. Flavors of spearmint emerge here and there, however, and as it warms this calms down quite a bit though the roasted coffee flavors remain throughout. 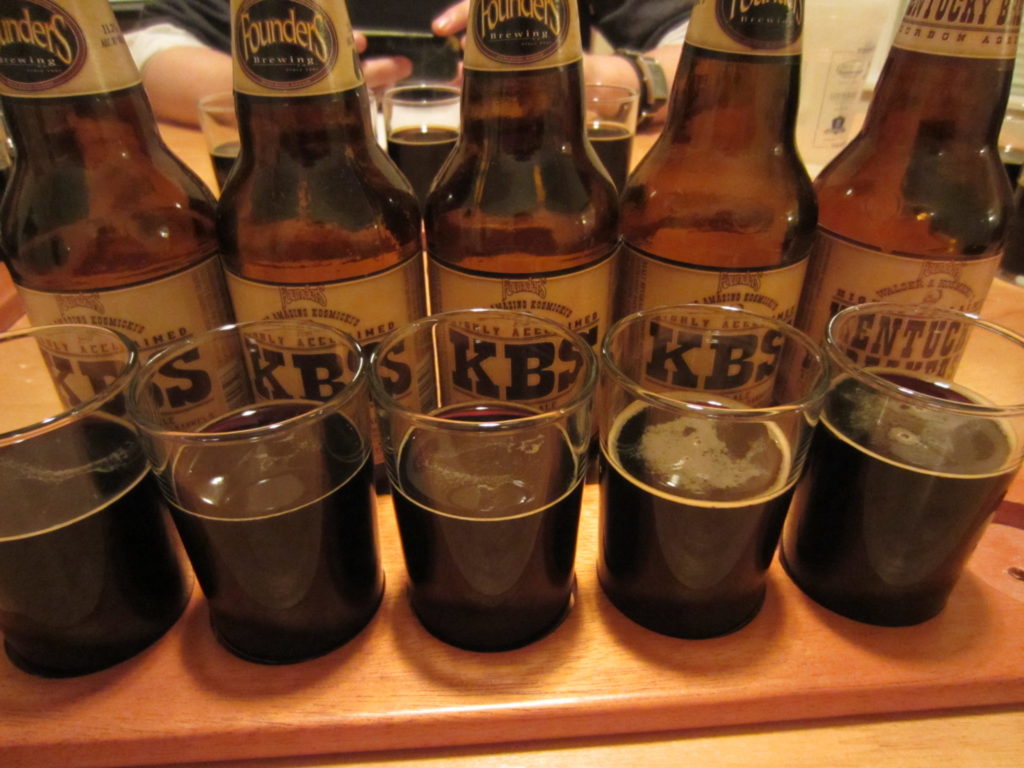 ’10: After sampling the oldest two years, the first thing you notice when you move onto the ’10 is a huge rush of fruit flavors still hanging on in this vintage. Hearty fig flavors right up front that were nowhere to be seen in the ’08 and ’09 as well as a decadent orange/chocolate flavor, much like those orange-shaped candies you only see around Christmas. I noticed that the tail begins to lengthen with the ’10 as well, with a bitter aftertaste lingering quite a bit more than the older offerings.

’11: So roasty it actually burns on the back of the palate, there is plenty of bourbon flavor to go around with this years brew. Strangely there aren’t any of those fruity notes so prevalent in the ’10, making that beer a nice oasis of complexity around the burn of this year and the smoothness of the older. While the ’11 is quite nice, it’s a bit of a way station between the brand new and better-aged versions.

’12: Hot, hot, hot booze explosion filled with not just whiskey but also dark rum as well. Flavor for days here, with a long tail that has quite a soothing velvety body for a beer so sharp and aggressive.  Leave it sit for a while and it does soften out; if you like those aggressive tastes and you’ve got a couple of bottles to share around, open one and split it and then sample the second rather than open both simultaneously.

Andrew: Ryan handled most of the back story on this one, but I will say that thankfully, this tasting was one of the first we did during a night of big tastings. Which is a good thing because my notes are, well, legible. But, for me, this vertical is kind of a pinnacle for our site because like Ryan, I feel like this was the beer that kind of started this whole thing for us.

’08: TONS of chocolate in the nose and incredibly smooth and dry. You know it’s boozy but it takes a while to feel it, clearly it’s softened a bit.

’09: Still chocolate but now I’m getting the coffee notes, in fact I’d say the coffee was a bit more prevalent than the chocolate. Still dry and smooth but now the beer has a roasty or smokey quality, like really smokey, peaty scotch (any Laphroaig lovers?)

’10: The beer is really stepping up its game now, intense, kind of bitter and borderline mean. It’s a bit sweeter than the previous two and now it’s the chocolate again that’s pushing to the front, really sharp chocolate flavors to be honest.

’11: And there you have it. My favorite from the vertical. Smooth. Balanced. Boozy. Complex as hell. In the previous years (just like we noticed in our 3 year vertical), it seems as though one flavor would really dominate, either chocolate or coffee. But not here. It’s perfect and harmonious. Oh, and if you’ve noticed this is the first time I was able to really find the booze. Maybe the ’11 was just the perfect version of KBS, or maybe 2 years is the sweet spot?

’12: The ’12 as you’d expect is just, well, more. More of everything. More burn, more coffee, more chocolate, more roastiness and just too hot. So as we’ve recommended in the past, just let this one sit for a while. It’s WAY too good to waste it fresh. 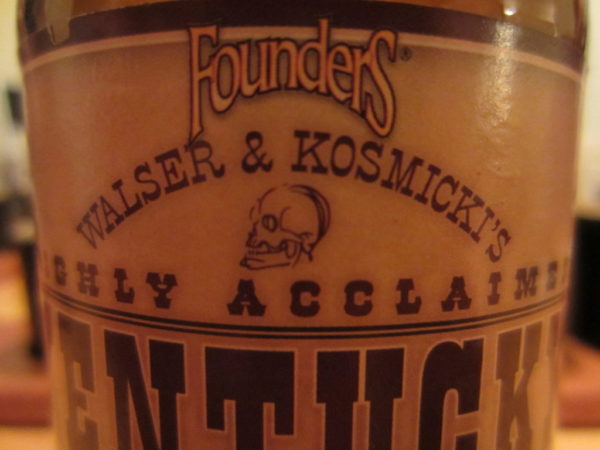 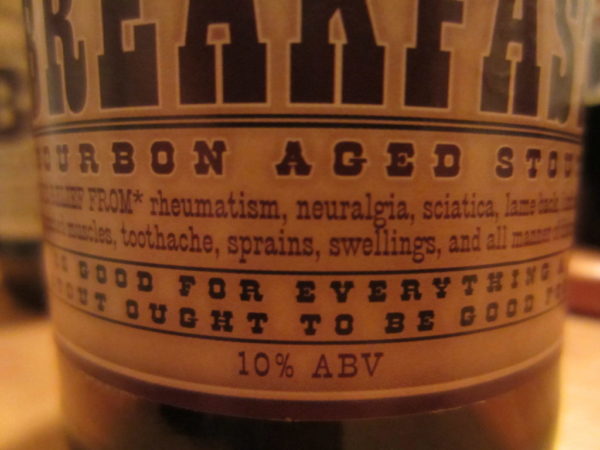 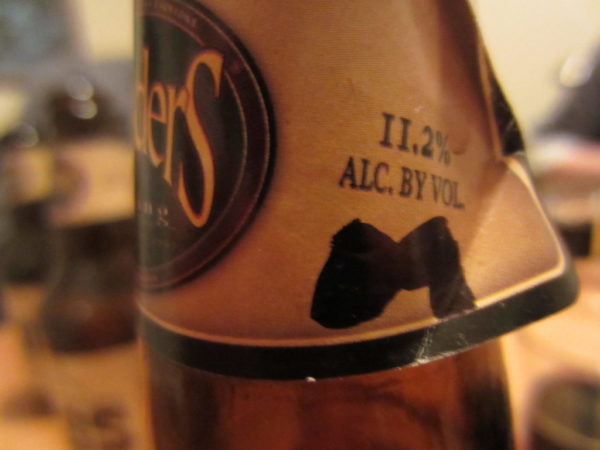 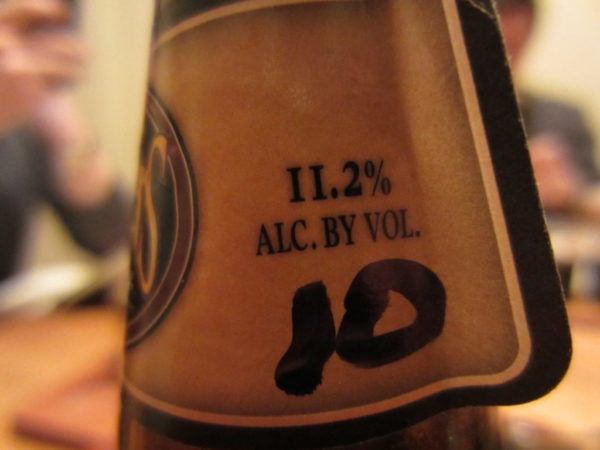 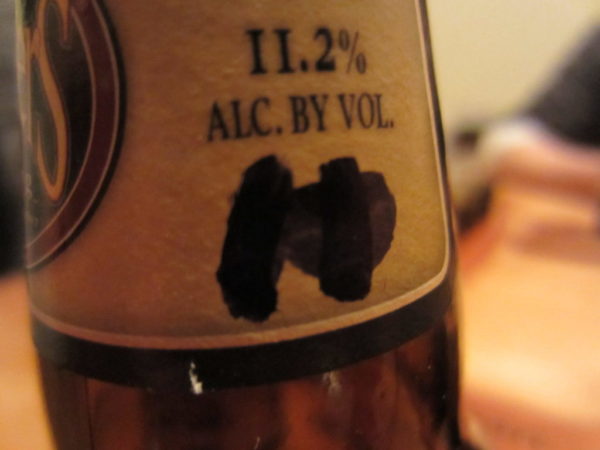 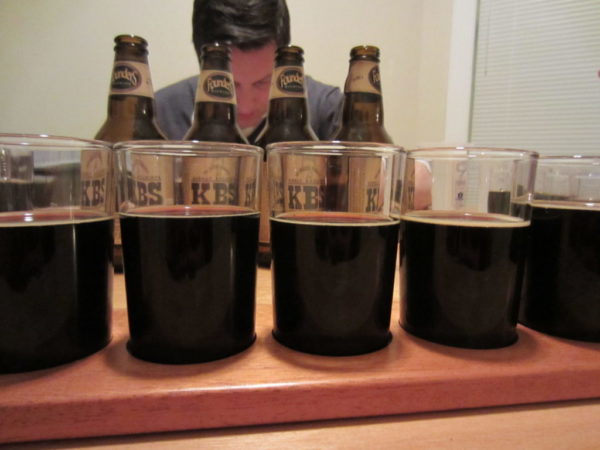 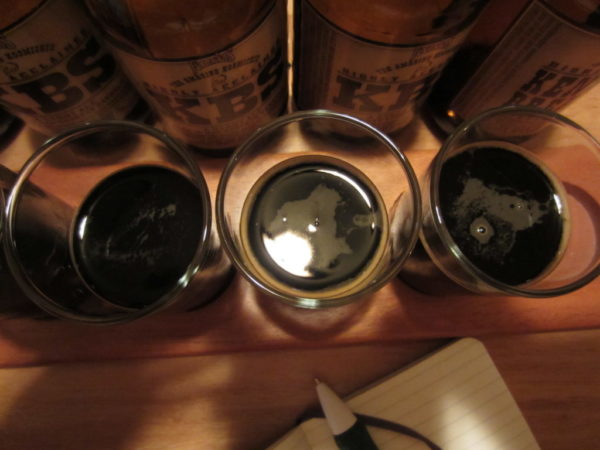 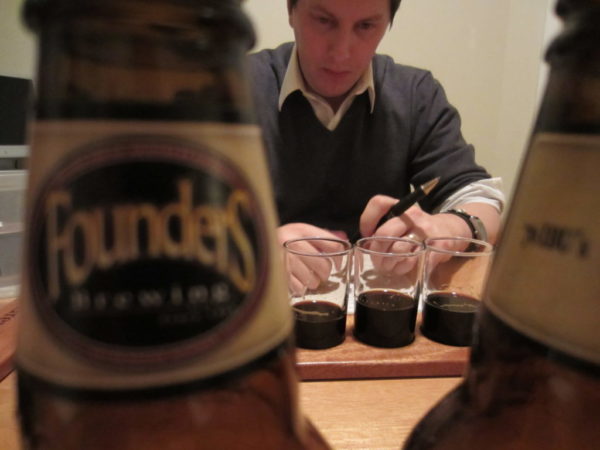 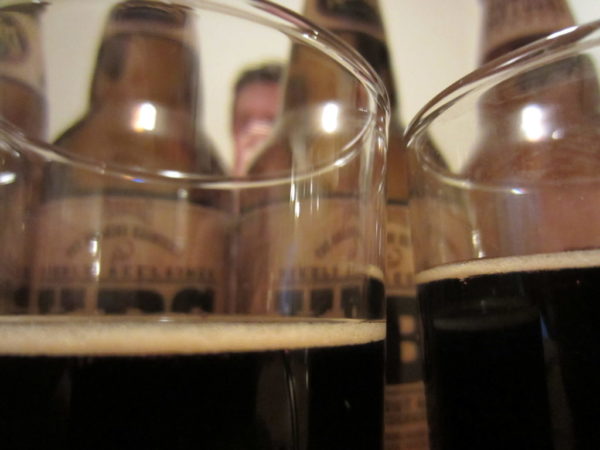 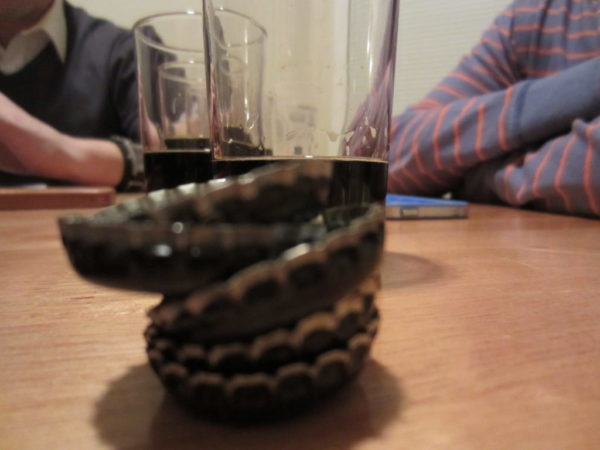 From The Cellar: Founders KBS 5 Year Vertical was last modified: August 27th, 2021 by The Guys