“Everyday Goose Island smells the wonderful coffee roasting next to our brewery at Chicago’s Intelligentsia Coffee and Tea. This world-class roaster puts the same passion and skill into their coffee as Goose Island does with its beer. This excellent stout is made with a different coffee from our friends next door each year. With the change in coffee comes a change in the flavor profile, making each release truly unique from the previous years.”

Karl: Sometimes a beer is so good, it’s actually hard to review it. I’ve sat down to write my review of Bourbon County Coffee Stout  a couple of times, got about a paragraph in, and just couldn’t figure out the way through to the finish. Early today I realized: it’s because no matter how fancy pants I try to set this up, it’s not going to be able to sum up all the awesomeness of not one but TWO years of Bourbon County Brand Coffee Stout.

So I’m just going to jump in the deep end here, and try my best.

It’s an embarrassment of riches when you’re sitting in front of not one but two of these beautiful red bombers. As soon as the caps are cracked the room filled with a rich aroma of intense coffee, as though the beer was trying to leap from the bottles and claw its way into us in any way possible, including straight through the nostrils.

So what about these two beers, individually? Perhaps the best way to describe them is that they were both awesome, for fairly disparate reasons. The 2011 had SO much coffee going on, on top of a background of that Bourbon County Stout we know and love. So much coffee. So much heat. So much of that too-pleasing burn, to the point of near-masochism. So much Aggression. This beer is a limit-pusher, but in a velvety smooth way.  Like Dean Martin holding a gun to your head. The coffee flavor is (and this is a word I don’t use lightly) perfect, the flavor of chocolate dances around but never quite lands, and it’s silken-smooth.

More From GDB:  Draftmark: We Tried It, We Liked It

The 2010 is so strikingly balanced in comparison, though, you can’t help but picture it as the grown-up sibling to the fresh beer. Even smoother, with new Flavors poking out from behind that veil of coffee. A touch lighter in color and even gentle when put up against the new beer; in a way, refined to a higher plane. Warm this up and new waves of flavor emerge; raisin and rum peek through adding new dimensions to an already impressive cellared offering. If the 2010 was Dino, this beer is Frankie, the leader of the pack and vaguely threatening in a more constant and subtle way. You know it can do damage…but it doesn’t need to remind you. You know it.

It’s clear that when it comes to these brews, Goose hasn’t lost a step. Moreover, no one else (that I’ve found) is even close to operating at this level. If you have the opportunity to do this in a head to head, jump at the chance. 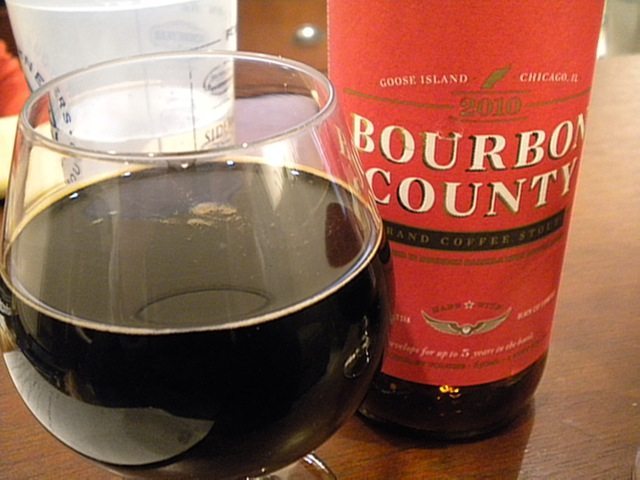 Ryan: I am not sure what, if anything, I can to add to Karl’s eloquent, fancy-pants review of these two beers – but I’ll give it my best shot.

First and foremost, in the interest of full disclosure, I’ve been very, very skeptical of the mad rush to get a bottle or two of the BCS varieties; Bramble, Vanilla and, of course, Rare. I didn’t get it. It’s just beer. It can’t be that good.

It is that good.

But that’s not what I thought going in to this tasting. Before we sat down to sample these the words were ready to fly off my fingertips; how these Bourbon County Stout varieties weren’t all they were cracked up to be and how I’m glad I didn’t run to 20 different beer stores looking for one. But now I see why people do.

Wait, Ryan, you’ve got a bottle. Isn’t that what you did?

Actually, no. I happened to be in the suburbs the day this beer was released and wandered in to a Binny’s and asked. I got my one bottle and walked out of the store an accomplished man. Good thing too, because the rest of my day went to shit. But it didn’t matter because I had a bottle of Bourbon County Coffee Stout and I literally walked in to it.

Less about me, more about the beer.

So what makes these two beers so great? How smooth and effortless they are to drink, for one. Both beers went down remarkable easy, far easier than a 14% ABV imperial stout should. And the coffee; rich, powerful and demanding.

The 2010 gave off just a slight hint of coffee, melded together with creamy milk chocolate and a slight aromatic reminder that the ABV stands at double digits.

The 2011, on the other hand, doesn’t leave you with a blend of aromas. It smells like a pot of freshly brewed coffee. More accurately, it reminded me of that robust coffee aroma – coupled with hot air – that blasts out of the vents outside of a Starbucks.

The taste was coffee. All coffee. And it was awesome.

Now, I have heard some complain that a fresh Bourbon County Coffee Stout is too hot. Too much coffee. And I would have to disagree with both sentiments. A year didn’t make the 2010 better than the 2011. They were equally remarkable in their own right.

Andrew: We are probably on the best stretch of beer tastings in the two years since we started this little venture, and just when I think things can’t get any better (Nemesis 2009, anyone?) we go and outdo ourselves again.

Couple that with our general…hatred is the wrong word, maybe annoyance or distrust, with MANY of the special release beers, the Bourbon County Coffee Stout surely won’t be able to live up to the hype.

Prior to this, we’ve had the Vanilla, and it was OK. A few months ago I had the Bramble Rye, it was fine. Both were way too hot and probably needed another two or three years to calm down a bit before I could really appreciate either. So what are we doing dipping into a fresh bottle of the Coffee?

More From GDB:  From The Cellar: New Glarus Unplugged Abt

I’ll just echo Ryan’s statement that just when you think it can’t be that good, you find you are wrong, and it is.

Both Ryan and Karl summed up both beers very nicely, and I’ll probably just repeat their sentiments here, but wow – these two beers were very different and VERY good in their own right. If you held a gun to my head and forced me to choose a favorite, it might just be the 2011, so I’ll start there.

So. Much. Coffee. And in the very best way possible. With a nose dominated by coffee and just a hint of chocolate, and a flavor profile overwhelmingly dominated by coffee, a lovely bourbon burn and a bit of dark fruit, it’s perfect, balance be damned.

Yet, I still loved the 2010 with its more subtle coffee profile (compared to the 2011, anyway), more chocolate and more bourbon burn. Might be one of the most balanced beers I’ve had to date.

Please, drink this fresh, or maybe you should age it, oh hell, I don’t even know what to tell you other than this beer is incredible either way.