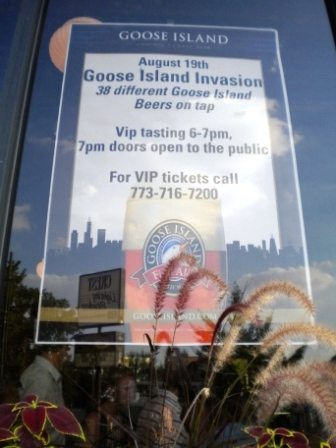 As much as I love beer, the actual events that revolve around brewing are generally too big for my somewhat anti-social personality.  Huge things like conventions and gatherings at places like the Aragon have never been as fun as I want them to be, simply due to the fact that I always find myself running around from place to place in a huge hurry.  I  never allow myself to enjoy things fully and never really having the amount time I’d like, nor do I really like the jostling for position and fighting for space.  (All these are also the same reasons I like hanging out at bars on Tuesday afternoon as opposed to Friday nights).

This is to preface why we (Ryan and I) decided to head over to Sheffield’s in Lakeview to attend the Goose Island Invasion.  38 tap handles changed over to all Goose Island beers.  Rare releases.  Special brews.  VIP passes for the first hour and unlimited tasting for those first 60 minutes.  Limited to 100 folks, which was right up my alley.    And most importantly, an hour to ourselves to hang out, enjoy some good beer and not a huge throng of humanity. 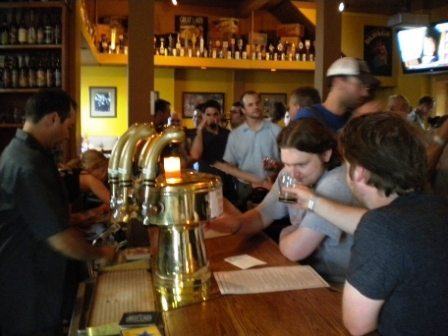 And a grand time was had by all.

While Ryan and I certainly couldn’t grab a taste of every single beer (I would be typing this from detox if we did) we gave it a healthy shot.  Sheffield’s has four separate bars, one of which was dedicated to Bourbon County Brand Stout varieties, one room that was all their hoppy beers, a front bar of all Belgian styles and the outdoor bar held their standards like Honkers, Harvest and so on. 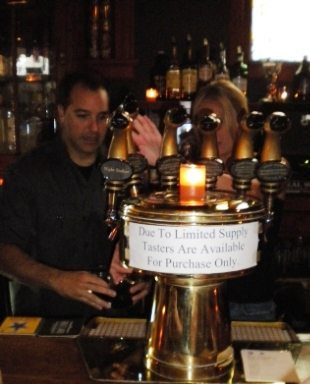 The staff of Sheffield’s was completely awesome and unfazed by the onslaught of beer freaks rushing for Goose Island beer, the crowd was laid back and relaxed despite an overdose of great drinks, and it was a great way to be able to embrace a local brewer that honestly I take for granted sometimes.

We spent a lot of time camped out around the BCBS bar and the Hop Room, as you’ll see, but some of the most impressive beers we grabbed were from the front Belgian bar.  Rather than drag out the descriptions, we figured we’d throw together a quick rundown of our 5 faves from last night and then go back to drinking coffee and keeping our hands from shaking too badly.

5:  Bourbon County Stout – Vanilla Ever since my first Breckenridge Vanilla Stout at Ashley’s in Ann Arbor (which reminds me – been too long since I’ve been there) I’ve been an absolute freak over beers flavored with vanilla.  The vanilla BCS is, with no equivocation, the best vanilla beer I’ve ever had.  Creamy, smooth, rich, whiskey-smoky, dripping with vanilla without overdoing it, and overall awesome.  On my first taste, I said “I want to bathe in this.”  That statement stands.

4:  Scully Ryan will likely tell you more about this Belgian white with berries and white pepper (is it your #1, Ryan?) where comparisons to Short’s Cake were thrown around.  While it didn’t quite live up to that awesomeness how could it? This was one excellent fruit/spice beer.  The strawberry matched up nicely with the Belgian qualities and the white pepper in the background added a new angle to one of my favorite beer styles.  And the fact that it’s named after Gillian Anderson’s X-Files character (as we were told by another patron) is pretty awesome as well.  I want to know more about that story, Goose Island.  I’ll be in touch.

2:  Sai-Shan-Tea Saison As much as I like tweaking Chuck Sudo about this beer, I honestly didn’t expect to like it that much.  I mean, tea?  I don’t like tea.  I love shandys, and I love citrus, and both of ’em in beer as well.  But tea?  Actually, the tiny sample I got was too cold for me to appreciate everything in here – but thankfully a friend got a full snifter, and we let it warm up and open a little, which is when I got what was going on.  And guess what – it’s pretty damned good.  Just like Ryan said in his review, the tea really does make a bold statement, but one that’s balanced very well.  It may have taken a little while,  Chuck, but I’m very glad I got a hand on this.

1:  Bourbon County Stout Combination – Coffee & Cocoa Nibs When the (awesomely nice and unflappable) bartender behind the BCS bar told Ryan and I that people were combining two flavors of Bourbon County there were two thuds heard through the room.  I believe my jaw won that race to the floor, but it was close.  I really wanted to make the mix of Ancho Chile and Cocoa the big winner, but these two were really the perfect pair.  The taste and texture were amazing, and the fact that it will very likely never, ever happen again pushes this to the top.  Just pure decadence.

More From GDB:  FoBAB 2014: We Haven't Been This Drunk on UIC Property Since We Were 18

Now I’m going to walk away from this list before I do any more editing, replacing, rewriting, or internal argument.  Any of the BCS could have made up a place on the list, and I’m fighting the urge to put the Citra or Indira or double-dry-hopped IPA or the Black IPA…see?  I’m stopping now. 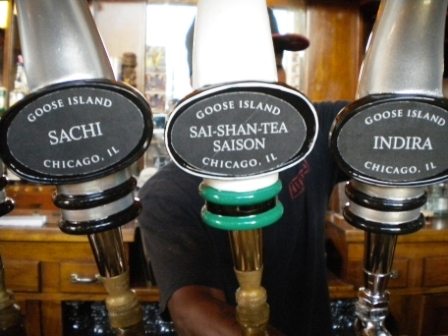 just a sample of the Belgians available on tap

5:  IPA Double Dry Hopped Dry hopping is a magical element that can make an OK beer good and a good beer great. In this case it made, what I believe, is a fantastic IPA into an even more fantastical IPA. What? The dry hopping really brought out the citrusy hops both in the nose and on the palate. It finished hoppy and nice and dry. Excellent.

4:  Indira This was an interesting one; a Belgian farmhouse ale brewed with lemongrass and lemon thyme.  It poured a deep copper in color with a big Belgian yeast head that filled half my tasting glass.  I love the spices associated with a farmhouse ale and the lemongrass and thyme added another layer of goodness to it; crisp and citrusy.  This beer also clocked in at 7% ABV but you couldn’t taste a drop of the alcohol.

3:  Sachi This was a Belgian Tripel that tasted like…banana pudding in a glass!  Lots o’ banana with a bit of clove mixed in for good measure.  Goose Island used two different Belgian yeast strains when brewing this and you could definitely tell.  This was unlike any Tripel I’ve had before.  This was also an easy one to drink, very smooth and very crisp, with that 8.5% ABV completely undetectable.  I like a good Tripel and this may be in my top 3.

2:  Scully The first thing I did when I took a whiff of this was look over at Karl and exclaim, “This smells like Short’s Cake!”  And that was even before I took a sip.  The bouquet of this beer is all fruit and all good.  As was mentioned above, this is a saison brewed with strawberries, white pepper AND honey.  Smooth, complex, fruity, sweet and dry are words I would use to describe this.  It was awesome and was killed before doors opened to the general public at 7.  It only took 1 hour for Scully to run dry.

1:  Bourbon County Stout Combo – Cocoa Nibs & Vanilla Bean Our plan of attack going in to the invasion was to hit the Bourbon County Stout taps first, then move to the next room full of hoppy beers and finish with the Belgians.  Well, we had about 20 minutes left when we sampled the last of what was on our shortlist so we proceeded back to the BCBS taps.  When we were there the first time I thought out loud, “I wonder what would happen if you mixed two variety’s together?”  And then I quickly clamped my hands over my mouth.  “That’s blasphemy”, I thought.  Blending two Bourbon County Brand Stouts — what a waste.  It’s funny that, after you have sampled a dozen beers, that doesn’t seem like such a bad idea.  It also helped that the bartender said other people had been doing it to.  So, Karl ordered up a coffee & cocoa nib BCBS and I went for the cocoa and vanilla bean.  Best decision of the night.  The cocoa and vanilla bean blending together tasted just like chocolate milk.  In fact, Kahlua may be a better example, although it was not quite as sweet.  Bourbon chocolate milk — what’s not to love?

Overall, it was a killer event with some outstanding and creative beers.

Here is the full tap list from the Goose Island Invasion: