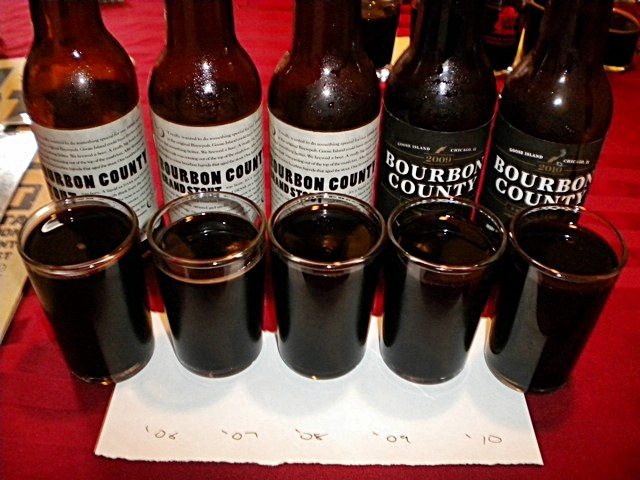 All the cool kids are doing year-end lists, so we’re jumping on board this “2011 Beers of the Year” train as well. You may recall we recapped our Top 5 Beers after a year of being in existence, but we have a few notable brews floating around in our brains that are worth mentioning. True, we spent most of the year Saving The Craft, but while we’re all between holidays we thought we’d mention a few of our favorite brews and see what y’all thought. Here we go:

KARL: In going through this year’s posts, it reminds me that A) Man, we did a lot of Save the Craft writing (and high-fives to Ryan for much of the heavy lifting on all of those) and that B) we should have posted more about the beers we drank. As such, many have been lost to the ages and to fuzzy memories, but the best ones have a way of shining through all that haze. I’ve had some damned fine brews and beer experiences this year, the top of which are below:

5) Our 5-year BCS Vertical: Fitting that a 5 year roundup of beers is my number 5. It kicked my ass but it was an incredible progression and definitely a once-in-a-long-time kind of tasting. I am still waving the white flag. Mercy. Uncle.

4) Short’s Chocolate Wheat: I drank a number of very fine house-only Short’s brews when we visited back in October, but it’s the Chocolate Wheat I’m still thinking about. Perfectly balanced, nicely flavored, not too heavy but just complex enough to invite concentration. I just discovered that they DID bottle Chocolate Wheat, and my happy dance is ongoing.

3) Unposted Vander Mill “Totally Roasted” Cider: Ryan and I stumbled into Fountainhead a short while ago to talk about site-related stuff, have a few beers, talk about the broadcast industry, have a few beers, and talk about beer. The last one of the night was this cider from Vander Mill in Michigan. Holy hell, was this amazing. Light, amazingly rounded and almost “fluffy” with vanilla and fruit and cinnamon and roasted nut flavor. Unreal that a cider can do this, more unreal that we lucked into this tiny one-off batch. Expect to hear a lot about these guys in the new year as they grow into more handles.

2) John Niedemeyer’s Backyard Beers: We sipped a couple brews while wandering Brewery Terra Firma earlier this year and it was like coming home. We’re very much looking forward to heading up for their future offerings.

1) Sarsaparilla Stout, Dark Horse Brewing & City Provisions Collaboration: I wanted this beer from the second I heard about it. I waited months to enjoy it. I had it the day it came out. I was not in the slightest bit disappointed. Which reminds me, I gotta get back there before they run out.

RYAN: Ah yes, 2011, the year The Guys didn’t write that much about the beer they drank and instead focused their attention on legislation, lobbyists and craft beer in the state. Despite our minds being fogged by bill numbers, sponsors and A-B’s obscenely long lobbying roll – we do remember a few things about the beers we drank…and boy did we drink some good ones.

Cracked black pepper leads the charge followed by jalapeno peppers – seeds, juice and all.  The smoke from the German smoked malt then flows over the palate to balance out the heat.  The 440 Pepper Smoker finishes spicy and the burn from the jalapenos intensifies with each sip but never reaches the point of being unbearable.

4) Arcadia Bourbon Barrel-Aged Shipwreck Porter: This was a nice change of pace from some of the more in-your-face bourbon barrel aged beers; I’m looking at you, Honorable Mention Goose Island Bourbon County Vanilla Stout. The BBA Shipwreck lacked the punch of a KBS or BCS but made up for it in silky smoothness and ease of drinkability.

The Bourbon Barrel-Aged Shipwreck was a impressively smooth, chocolate-y, roast-y and toast-y with barely a hint of alcohol. Sure, it didn’t knock my socks off or make me see stars but this is a VERY good barrel aged beer.

3) Short’s The Wizard: Breathtakingly awesome is probably the best way I can describe this barleywine from Short’s. This beer out-shined any barleywine I have had to date; fresh or cellared – American or English. Magically creamy and sweet; The Wizard is without a doubt a sipper.

This was a remarkably easy drinking barleywine that I would pit up against any aged English Barleywine in your cellar.  The maltiness and sweetness were spot on and the addition of the raisins added an extra complex layer to this beer that really put it in a class by itself.

2) Goose Island Bourbon County Stout 5 year vertical: Sitting down with five years worth of this beer really gave me a new appreciation for the depth and complexity of this barrel aged wonder. Not so much because of the drastic changes that this beer undertook in the cellar. No. In fact the opposite happened. Each pour presented subtle changes that were harder and harder to distinguish as we went back in years. The bottle says it ages for five years but it can go much further than that. Because of that we have set bottles of 2006 through 2010 back for five MORE years to see what becomes of them.

I was a little disappointed there weren’t more drastic changes to this beer. They were soft, subtle and at times – especially near the end of our tasting – unnoticeable. But at the same time, the lack of glaring differences allowed me to better appreciate this beer.

1) Kuhnhenn 4D (eventually posted): This beer is part of a growing list of beers I sampled this year that I haven’t gotten time to write up. It’s a shame that my number one beer of 2011 doesn’t have a dedicated place here on the site. But it will…eventually. The 4D is the only beer I have come across that promises…and delivers…on marshmallow flavors.

ANDREW: 2011 was a bit of a weird year for us at GDB as we pulled back quite a bit on our tasting posts while leading the charge on the Save the Craft campaign. Hopefully we’ll be able to step up the reviews heading into 2012. Regardless, here are my top 5 from 2011:

5) Sweetwater Festive Ale: I had the Festive Ale in my “1 Year of GDB Top 5 Beers Thus Far” post, so I might as well keep it here. Great winter warmer and I’m looking forward to doing our vertical of the ’06, ’08 and ’10.

4) Cellared Dogfish Head 90 Min IPA: So we decided to cellar an IPA, dare I say it actually improved this beer? We liked it, we’ll do it again and you should too. #webelieveinagedipa

3) Goose Island Bourbon County Stout 5 year vertical: I think Ryan and Karl pretty much  hit on everything that needed to be hit on here; just know that it was big, boozy and incredibly awesome.

2) Trappist Westvleteren 12: Yeah, yeah, this is a safe pick for a top 5 beer, but honestly it is a highly-sought-after-beer that lived up to the expectations…so back off.

1) Foothills Sexual Chocolate: I stand by what I said in that review – this is one of the few special release beers that I think merits waiting in line for hours upon hours in the freezing cold and definitely deserves to be my number one for 2011.