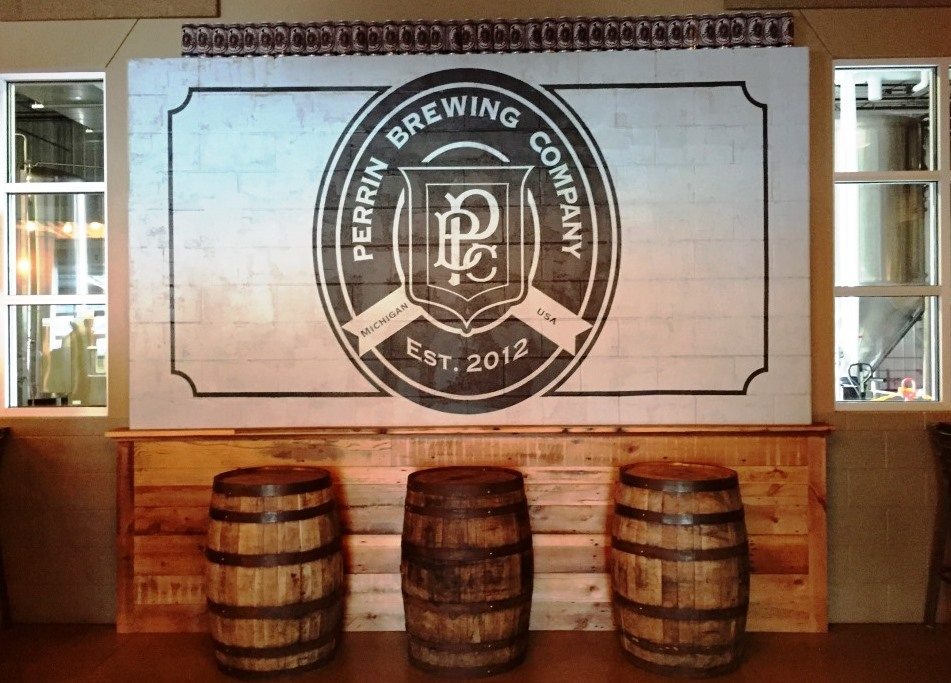 If you’ve been traveling to Grand Rapids for a while, you probably remember those hallowed days a few years back when you could pop into the then-still-pretty-huge but-not-gargantuan-like-it-is-now Founders Brewing for a quick pint, and it was a nice and relaxed kinda joint. Bright, airy, comfortable, comforting, even a bit cavernous.

Nowadays a visit to Founders is a bit more of a circus, and justifiably so — the House That All Day Built has a lot of fans. It’s great to see one of the nation’s largest and best craft breweries appreciated as they should be. And yet, I still selfishly miss the days when you could leave Chicago on a Friday at around 9am, roll up at around lunchtime, have a taproom specialty beer and a sandwich or grab a growler and get back on the road without too much stress or delay.

Which is why our most recent trip to the Perrin Brewing Company taproom and restaurant was so very refreshing.

The bulk of my prior experience with Perrin can basically be summed up in two words: Grapefruit IPA.

Yeah, yeah, I know, grapefruit beers are everywhere now. But think back to a time, a time long, long ago, before the onslaught of Fruited Everything Everywhere, before every hoppy pale came with a squirt of mango, a splash of pineapple, a dash of kumquat. (You know, all of about 8 months or so ago.) Picture me, sitting on a hot summer patio in northern Michigan in 2013 (I think, maybe it was 2014), where I ordered the simply-named Grapefruit IPA from a brewery called Perrin that was new, small and growing fast.

And it was a revelation. Bitter, tart, creamy, bright, refreshing, drinkable. The kind of beer — much like Founders’ All Day — that trends are made of.

Perrin had stumbled* onto the forefront of a beer movement that wouldn’t fully kick in until about three  years later, when citrus and acid and tartness seemingly came in everything. At the time, though, the grapefruit IPA was still a novelty, if also an instantly-appreciated one. Calling it Michigan’s beer of the summer a couple years ago — in a state which has been doing just fine with summer craft beers for decades — isn’t hyperbole. Honestly, I didn’t even care if Perrin made any other beer than the grapefruit IPA for a while. I didn’t need anything else. Their grapefruit IPA was juuuuuuuust right.

And now everyone’s all “dude, have you had Grapefruit Sculpin yet? It’s Sculpin! With grapefruit! Grapefruit!” Yes, I’ve had it. It’s good. Perrin’s is better.

Since then, Perrin has gone stratospheric, having been purchased by Fireman Capital and making them siblings with Oskar Blues. As of earlier this year, they’re all bundled up with Cigar City (themselves purchased almost exactly a year after Perrin’s purchase, so watch out for what happens next March). The infusion of capital allowed them to start packaging beers and are now on shelves of major stores like Meijer.

They went big fast, and their seemingly-unending expansion now has them in multiple states beyond the Mitten, with beers being sent to Colorado, Ohio and Indiana. 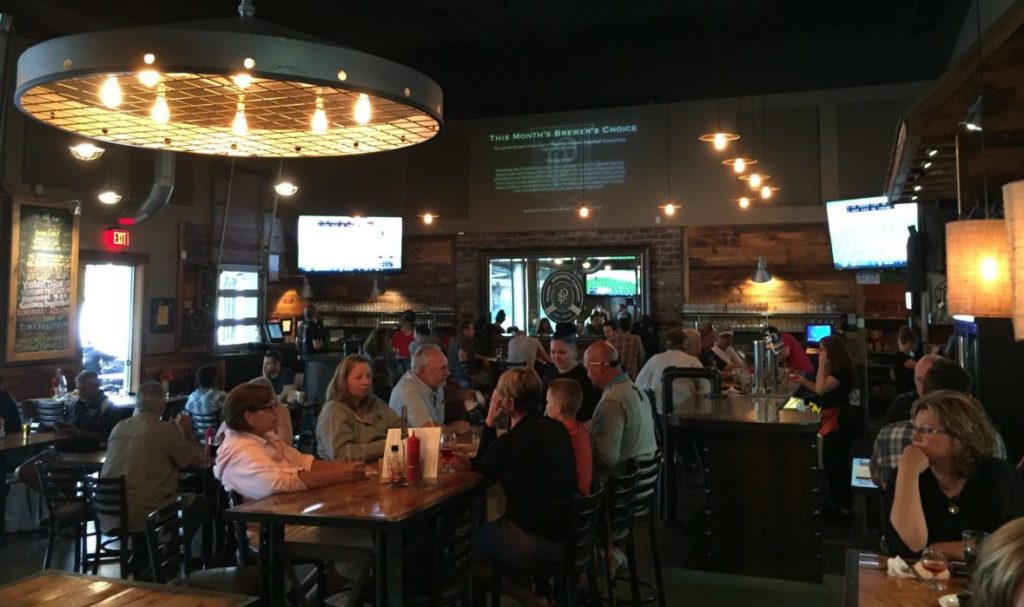 And yet, when we pulled into the half-full parking lot in front of Perrin, tucked into a mostly-residential area of quiet, leafy Comstock Park, and walked into the dimly lit, loud, echoey taproom, I felt like I was in a small local brewpub. There were families dining. College sports on TV. Garage doors emptied onto patios. There was a kid having his birthday party (okay, the parents were partying and the kids happened to also be there too) over in a private room.

The windows looking into the brewhouse showed a bunch of big tanks, hoses, drains, a forklift, and everything else that goes along with your average moderate-sized brewery. No real indication that this was one of the fastest growing breweries around. Certainly not that they’d just started their multi-state expansion.

And it was lovely.

It reminded me of those long-lost trips to Founders, when everything was calm and cool and relaxed. I didn’t think I’d get that feeling again, and certainly not just minutes from downtown Grand Rapids where that vibe originally struck me.

And it made me think…if that’s how Founders felt back then, and now they’re huge…well…

I’d better enjoy this while it lasts.

If, at this moment you’re thinking:

“Okay, we get it. He liked the grapefruit beer. It’s a cool place that’s like Founders but more hidden and calmer. But the rest of their canned beers kinda bore me.”

I hear you. Look, I grabbed the Pack of Problems 12’er from Meijer too.

I was underwhelmed by the lightbodied hopwater of the No Problems session IPA, while the Lotsa Problems imperial IPA hit me like a overweighty doughy malt bomb — and if I wanted to drink a beer that tastes like Bells’ Two Hearted, I’ll drink a Two Hearted, not a close clone like the 98 Problems regular IPA.

Beyond the mixed twelve-pack, their other canned option of a black IPA didn’t give me the roast and pine I like from a Cascadian dark, but more of a murky and uninteresting bitterness. (The jury is out on their cans of Gold, a blonde ale that has the good sense not to label itself with a buxom or scantily clad woman. I’ve not cracked one of those yet.) 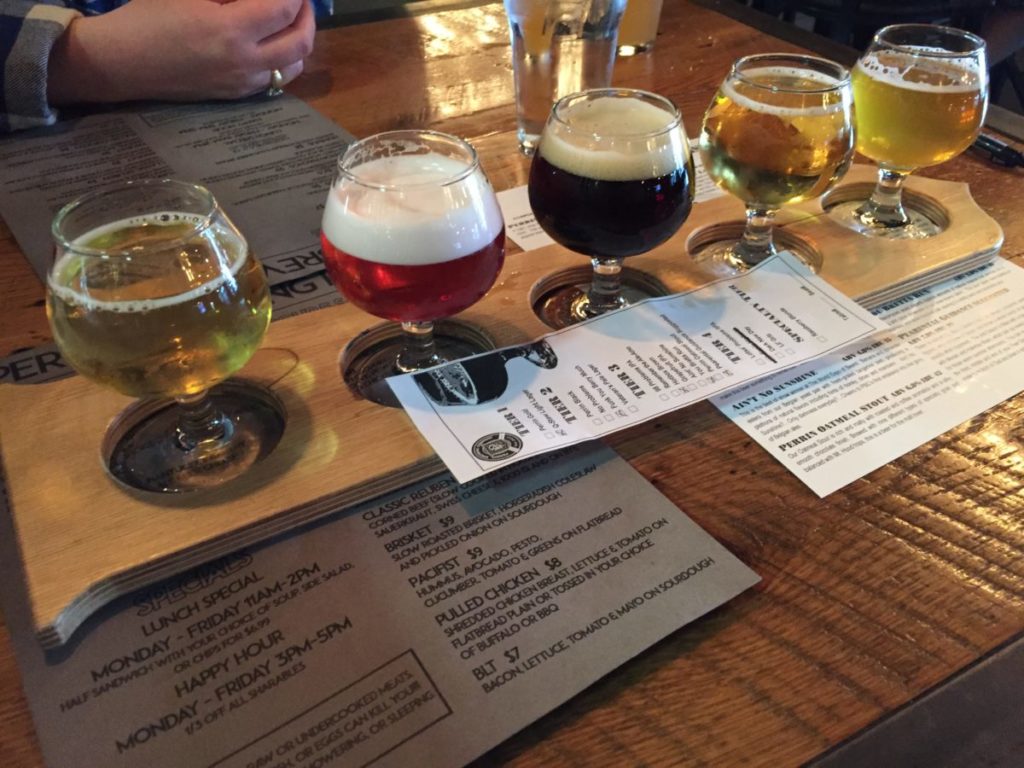 The grapefruit remains my only preferred package from Perrin. And that’s not a big deal. Because there’s plenty of excellent beers on draft at the brewery taproom, and you won’t need to worry about anything in cans, unless you grab a 12’er of grapefruit for the road like we did.

Here’s what I tried:

Any time I see a brewery daring to try an American Light Lager I try it, just to see if anyone can do anything interesting with the style (and also with the hopes that I’ll see it beating out the Big Guys at GABF who always seem to win the category with Old Style or something). The Q-Stew Light Lager is clean, crisp, and tactically dryhopped for some hefty fruity aroma and bitterness. It’s good, and surely more complex than the average brewpub’s answer to the “what’s closest to Bud Light” question. It’s a beer that could bring people into the fold, while also keeping folks like me on their toes.

The Funk You Berry Much won’t win any pun competitions but offering a fruit beer on nitro is enough to juice my brain into being interested, and this one met my expectations. Deepen the flavors of a Short’s Soft Parade with some darker and heftier malts and make it delectably creamy and you’ve got an idea of where I’m coming from here.

Their You Bretta Run brings to mind that Pink Floyd song I’ve heard a zillion times but also brings the delicate funk of a brett beer on top of a nice golden blonde based with a touch of sour on top but nothing too challenging — their site proudly proclaims that this is a stainless-only beer with no oak aging so you’re getting pure brett deliciousness.

The Parental Guidance pairs pear with an above-average saison for a flavor profile that seems to be growing in popularity — I saw a couple pear saisons during this year’s CCBW —  and the Hotbox Brown was a rich, roasty, earthy, malty, hearty, deliciously coffee-laden brown that would be fantastic in a tallboy next to a campfire come autumn. (AHEM.)

So don’t sweat it if you don’t like their IPAs. There’s a zillion other IPAs in the world for us to enjoy. Come have a beer with me at the taproom and we’ll find you something you like.

Bottom line: With breweries like Bells, Dark Horse, Brewery Vivant and finally Short’s sending beer to Illinois, we have less and less reasons to mule anything back from the Mitten.

* On a similar note, Chicago’s Arcade Brewery similarly beat the trend to grapefruit beers by quite a bit — the label for their Grapefruit IPA was floating around for what seems like years before they even got the brewery off the ground. Just goes to show that timing is everything.

Perrin Brewing: You Should Visit, And Here’s Why was last modified: February 6th, 2018 by Karl