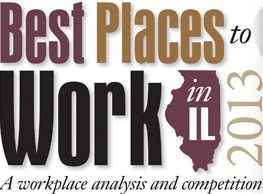 May 17, 2013 – G&M Distributors, Inc., Galesburg, announced today that they have been named as one of sixty companies being honored in 2013 as the “Best Places to Work in Illinois.” The company ranked 31st among Illinois employers with 15 to 249 employees. G&M was one of only four companies nominated from outside the Chicago metropolitan region.

The “Best Places to Work in Illinois” awards program began in 2006 and is promoted by The Daily Herald Business Ledger in partnership with the Human Resources Management Association of Chicago (HRMAC), the Illinois State Chamber of Commerce, and the Workforce Boards of Metropolitan Chicago.
This statewide survey and awards program was designed to identify, recognize and honor the best places of employment in Illinois, benefiting the state’s economy, its workforce and businesses. Companies from across the state entered the two-part process to determine the “Best Places to Work in Illinois.” The first part consisted of evaluating each nominated company’s workplace policies, practices, and demographics. The second part consisted of an employee survey to measure the employee experience. The combined scores determined the top companies and the final ranking.

“Being ranked as one of Illinois’ top employers is a humbling honor,” said Adam Vitale, President of G&M Distributors, Inc. “This was the first year we achieved this accomplishment. And, we still have significant opportunity for continual improvement. This award is primarily based on feedback from our team, and they are our number one resource.”

G&M Distributors and its fellow winners were recognized and honored at the “Best Places to Work in Illinois” awards ceremony on May 16 in Rolling Meadows, IL.

ABOUT G&M DISTRIBUTORS, INC.: G&M Distributors, Inc. is a wholesale beverage company located in Galesburg, Illinois. They are a third generation family business that was founded in 1946 by G. Louis Vitale. G&M employs 72 full-time and 4 part-time employees, several of which are members of the Teamsters Local No. 627. G&M strives to integrate the company with the communities it serves.

Galesburg Beer Distributor Named One Of The “Best Places To Work In Illinois” was last modified: February 6th, 2018 by The Guys