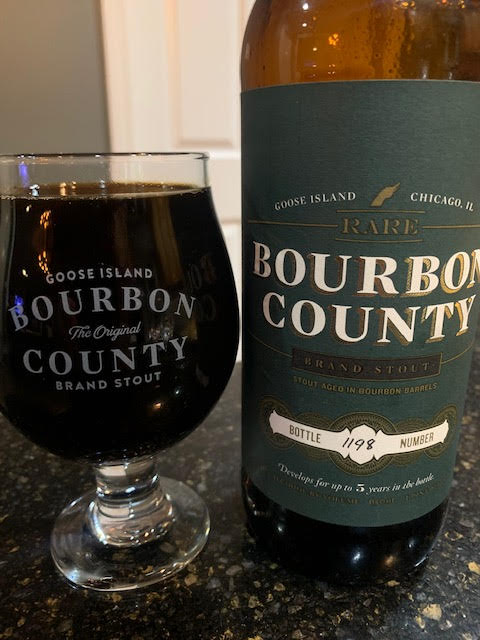 Wherein we decide that a decade of aging is long enough for one of the most sought-after Goose Island brews: 2010 Bourbon County Rare

Vaccines being introduced that will finally end a global pandemic. Democracy allowing us to bring sanity back to the White House. A blessedly needed job change.

In reviewing my “how it started/how it ended” for 2020, there was reason for optimism. A reason to raise a glass of something … special.

And there are few better ways to do that than by reaching deep into the cellar and opening a 2010 Bourbon County Rare.

It was 2008 when Goose Island set aside 43 barrels of 23-year Pappy Van Winkle bourbon, filled them with the original Bourbon County Stout, then allowed them to age for two years. The result was a 13% stout that is now considered among the world’s best – an original whale among craft beer enthusiasts. Just 940 cases (roughly 11,000 bottles) were shipped out for distribution to just 18 states.

A few weeks after its Black Friday 2010 release, I was strolling through Binny’s South Loop and spied a few on a shelf. Only a few years into craft beer at that point – having not yet heard of some website started by fellow journalism types about some guys drinking beer – I remember hearing a bit about it and thinking: “Oooh – it’s in a box too! It must be fancy!”

Sure, the $45 price tag made me think twice. “That’s crazy! Who would pay that much for a bottle of beer?!?”

But after hesitating, I realized it was almost Christmas – I’d gift a bottle to myself and another to a buddy who was getting into this craft beer thing too. I left the few remaining boxes for others.

I took it home and then … well, it just sat. Life happened. Other hyped beers came out. Lost touch with the buddy. Pastry stouts became a thing. Through it all, on a dark shelf in a storage area under my stairs, never exposed to the elements, the 22oz bottle gathered dust.

I took it from the shelf where it’s stayed for 121 months and – trying hard to ignore the secondary-value pricing of about $325 – met two safely-distanced friends in a suburban garage and surprised them. Despite all the great beers we’ve consumed over the years, this would be a first for all of us.

And it did not disappoint.

More than 12 years after it was poured into those Pappy barrels, the beer remains magnificent. The average rating of 4.8 across multiple beer sites is well-earned, as is its ranking as the #4 variant of all time per ABVChicago.

The nose is a bit of chocolate and a bit of barrel. The first few sips delivered some dark chocolate undertones. The barrel’s oak notes are – remarkably – still noticeable. Nursing it over the course of the evening, it even began to take on a molasses-like sweetness as it warmed. But it remained silky smooth throughout, with medium thickness, and completely drinkable.

Of course, holding onto a beer for a decade can be a crapshoot. But this is no gamble. If you’ve got one, find a reason to open it. Or go get seven times what you paid for it. But if you do, maybe negotiate a small pour before it leaves your hands.

Because it’s a reminder of all that a barrel-aged beer can be without adjuncts. And it’s a credit to the Hall family, who were willing to patiently put the necessary time into making this 2010 Bourbon County Rare something so incredibly special.