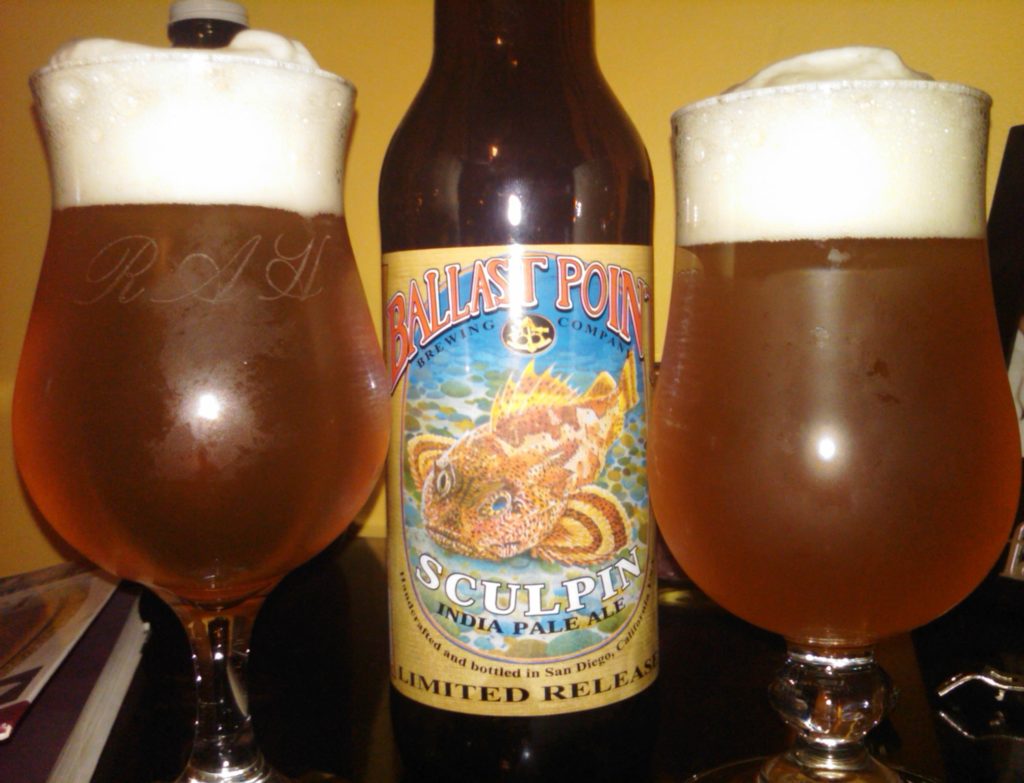 “The Sculpin is a testament to our humble beginnings as Home Brew Mart. It showcases bright flavors and aromas of apricot, peach, mango & lemon. The lighter body also brings out the crispness of the hops.”

Karl: I’m admittedly not very up on my Ballast Point beers – they’re one of those brewers that downstate seems to get and yet in Chicago they’re pretty much unknown.  As much as I would like to know everything possible about everyone, in some cases a little ignorance is a good thing.  With no preconceived notions about the brewery or the beer I could just focus on the taste itself without bringing any baggage to the tasting table.

The Sculpin, an American IPA, pours a dark golden color with a nice thick, long-lasting pillowy white head.  So far so good.  When you’re dealing with something where you have no point of comparison within the brewery, you tend to look for anything else close to do a little point-counterpoint with.  This is all to explain why on the first taste my brain immediately lit up with “It’s like Hop Stoopid!  But less malty!  And more balanced!  And nicely crisp!  And sweet!  So sort of like Hop Stoopid, but sort of not!”

Beyond that, it’s a very evenhanded IPA with a nice malt background paired with up-front but not overpowering hops, and just a little bit of apricot on the finish.  I went from a complete blank on the Sculpin to a healthy appreciation, and I’d happily revisit this beer.  Best IPA ever, as some seem to think?  I wouldn’t go that far (have you EVER had a Two Hearted?) but man, this was good.

Ryan: Depending on who you ask this may be the IPA to end all IPA’s.  Is it really that good?  Actually, yeah, it is pretty damn good.

Sculpin pours a cloudy copper in color with a huge, pillowy white head that takes forever to fade away.  With that first pour Sculpin is a gorgeous looking beer.  Get a little bit of that billowing head on your nose.  Go ahead, stick your face in there and take a good whiff.  Ahhhhh – piney hops.  Smells like a spruce tree.  You get more of the citrus hops on the palate though with juicy passion fruits, grapefruit and lemon zest.  Karl is right, it is very well-balanced and Sculpin is also very easy to drink.  The 7% ABV is well hidden.  This is a very hoppy beer, don’t get me wrong, but it also has a nice malt backbone to even things out.

You can’t find Sculpin in Chicago but you can in downstate Illinois, which is where I grew up.  I can remember countless times dropping in to the local liquor store to see if I could find anything that wasn’t available in Chicago – usually Schlafly and Boulevard beers – and passing right by the bottle with the ugly fish on the front.  Now, I purposely seek out the bottle with the ugly fish.  I can’t speak for the rest of Ballast Point’s offerings but they really knocked one out of the park with Sculpin.