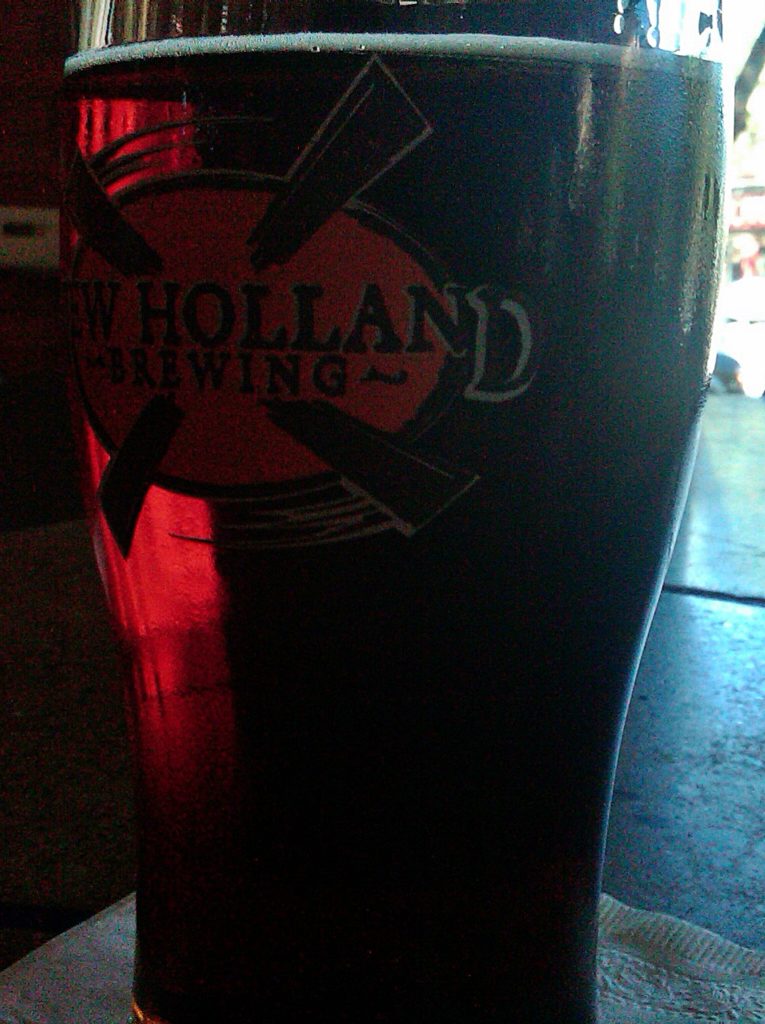 “This is a hoppy, sweet red ale. Hazy red glow with a creamy, dense head. Aroma is bursting with sweet pineapple and tangerine zest . Caramel, raisin and prune lie under a dominant citrus flavor profile…. Tropical fruit, tangerine, pineapple and a touch of pine are left on the palate. Hoppy citrus flavor without an aggressive bitterness. Brewed with 100% Citra hops.”

Ryan: A hoppy red ale on tap at New Holland, how can I pass it up?  This was poured into a New Holland pint glass during a recent lunch visit (get the corned beef).  As you can see this beer poured a gorgeous amber in color with a scant bit of thin, white head that didn’t hang around too long.  Stick your nose in and you get a huge whiff of citrus.  I hate to steal a line from the breweries description but you do get quite a bit of tropical fruits on the nose and just a little hint of hops.  You definitely get the citrus when you sip on this beer with some malty sweetness to balance things along with a somewhat dry but not bitter finish.

This was good.  Not great – but good.  I brought a growler home and split it with some friends.  Again, similar reaction.  They liked it but weren’t blown away.  If I were to find this on tap again I would definitely get it.  At 6% ABV it is pretty sessionable and has enough taste to want two or three.  The lack of an overly hoppy finish also won’t turn off the non-hop heads out there.

Once again it was nice to see something out of the mainstream on tap at New Holland.  They had the mainstays, seasonals and Hatter’s (four again) along with the Red Citra and a dunkel wheat beer.  If you have not swung by New Holland, give it a shot.  And make sure you get the corned beef.  Seriously.