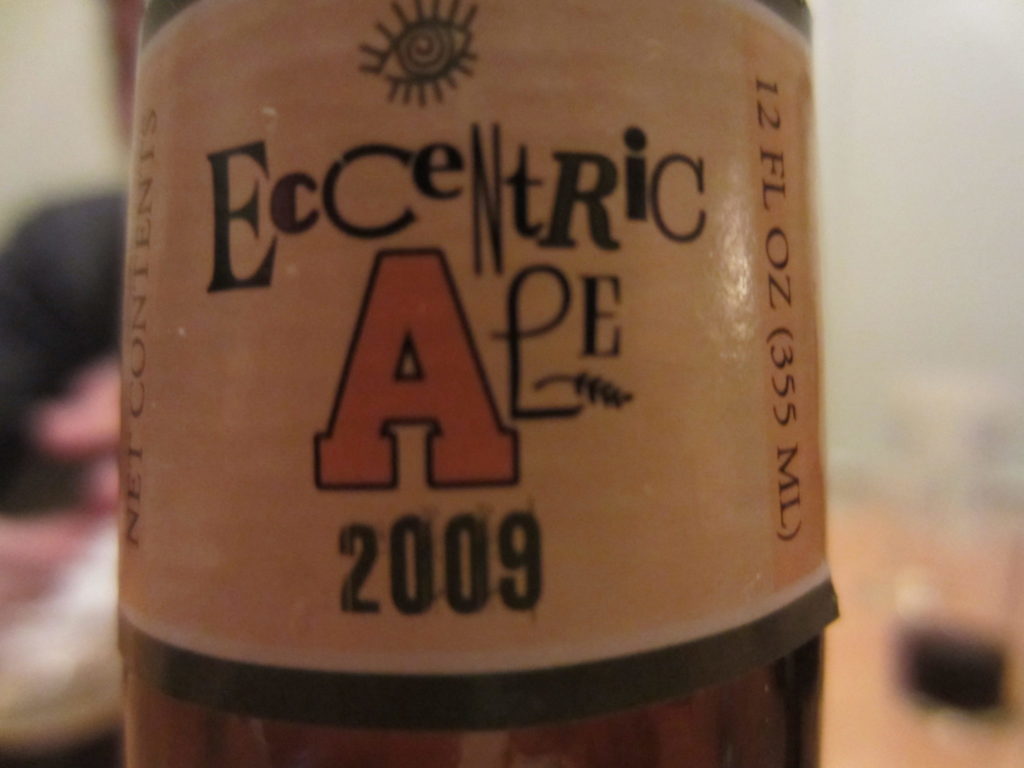 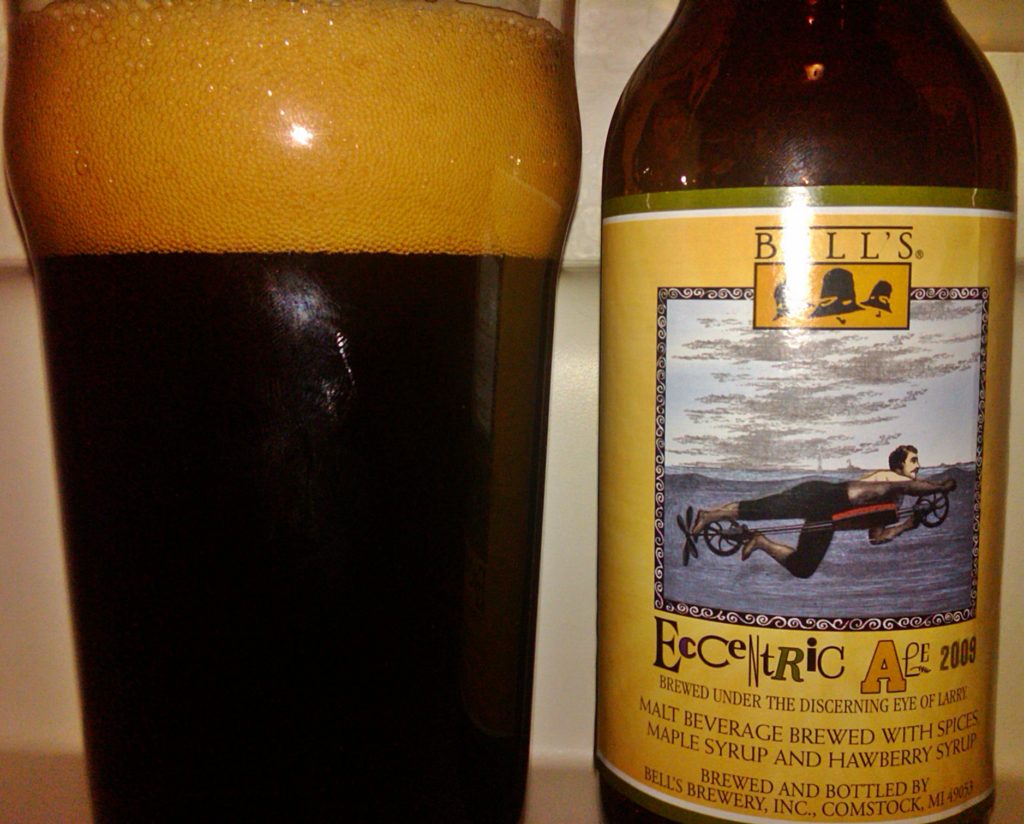 
(Editors note: we’ve stockpiled enough Bell’s Eccentric Ale 2009 to review it every so often to see how it is developing, aging and changing. Feel free to read through from the fresh tasting to the most recent review. However, if you’d like to jump around, be our guest, and read more about Bell’s Eccentric Ale 2009 fresh, after two years, three years and five years in the cellar.)

Ryan: My first exposure to Bell’s Eccentric Ale series, a yearly brew to commemorate the brewery’s Eccentric Day party, was a 2008 bottle that was sampled fresh and recently reviewed after one year in the cellar.  As I noted in that review, I’ve found Bell’s one-off beers to typically be over the top with huge flavor profiles and big-time ABV’s.  The 2008 was a sweet, syrupy beer that had the consistency of homemade root beer.  Would a fresh bottle of the 2009 be similar.  Absolutely not.

I think the best way to describe Bell’s Eccentric Ale ’09 is to liken in to a black IPA.  A black IPA that is menacingly mean, won’t return the neighbor kids’ ball when it lands in his back yard and sets out a bucket of empty Pixy Stix wrappers for Halloween.

Pouring a grumpy ‘ol opaque black with nearly a fists worth of tan, frothy head Eccentric ’09 has a nose full of pine needles and tree sap leaving you with the impression that you wandered in to a pine forest, not having just poured a beer.  There are notions of raisins, licorice and molasses too but it can’t get past the over-the-top hops and the aggressive smell of booze.  Take a sip and you get kicked in the face with an abrasive-ly bitter hop profile that leaves an unpleasant aftertaste you can’t seem to scrape off your tongue.  There is a bit of syrup mixed in with some dark fruits and molasses in the middle of this beer, but its hard to find seeing as how it’s sandwiched between such aggressive hoppiness and roastiness.  This one needs time in the cellar.  Bad.

This one was tough to get down fresh and tough to find anything, really, to compare it to.  The best I can come up with is Bell’s Batch 10,000.  Although, I’d take another 10,000 over the Eccentric Ale ’09 any day.  There are a few more bottles for the cellar, so this one is going to hang out for a few years and we’ll see what happens. 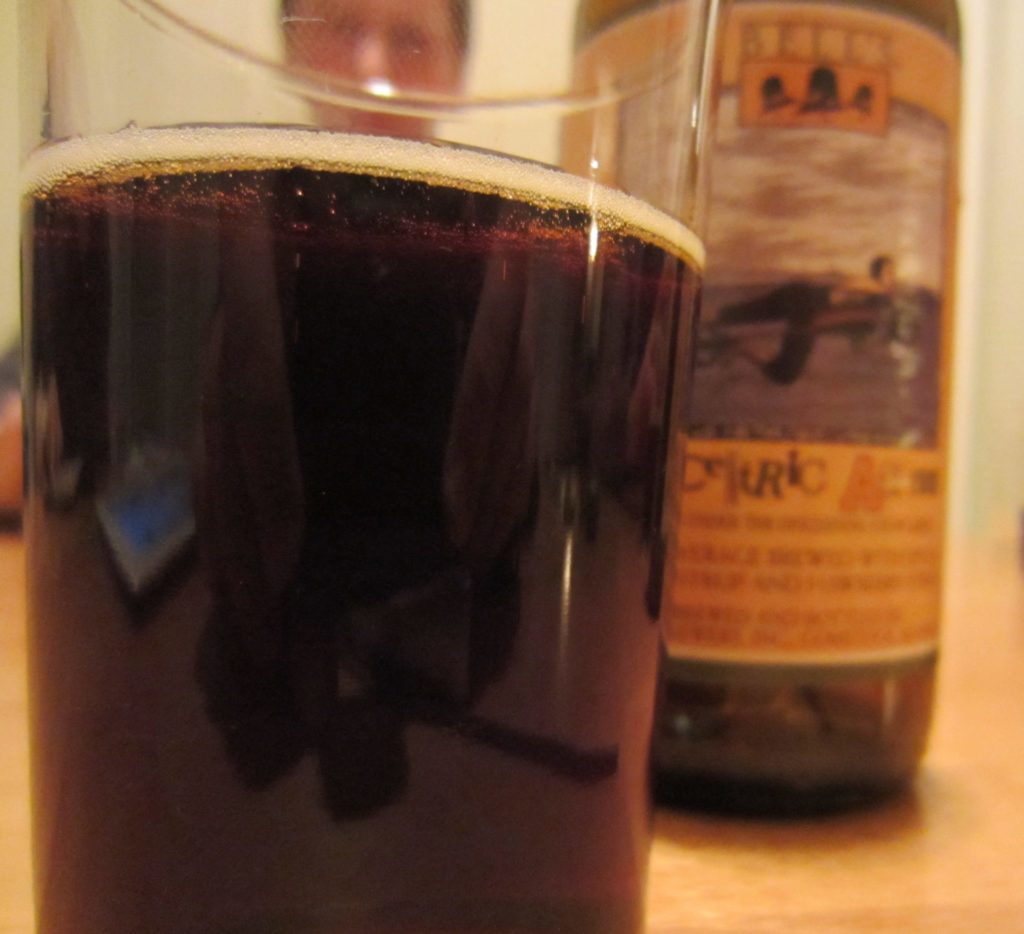 Ryan: Aggressive. Menacingly aggressive. After two years in the cellar this beer is still mean as hell.

The ’09 Eccentric Ale tricked me into thinking it had calmed down some in the cellar. The nose gave off a somewhat pleasant, albeit strong, aroma of pine trees and wintergreen.

Take a sip, however, and this beer rears its ugly head.

Aggressive, cloying and grimace inducing piney hops hit hard and fast followed by an overpowering smokiness that finishes with a blast of Crème de menthe. The perceived raisins, licorice and molasses that I picked up on two years ago are nowhere to be found, buried beneath a jerk of a beer.

I didn’t think it’s possible, but this beer has gotten more aggressive over time. 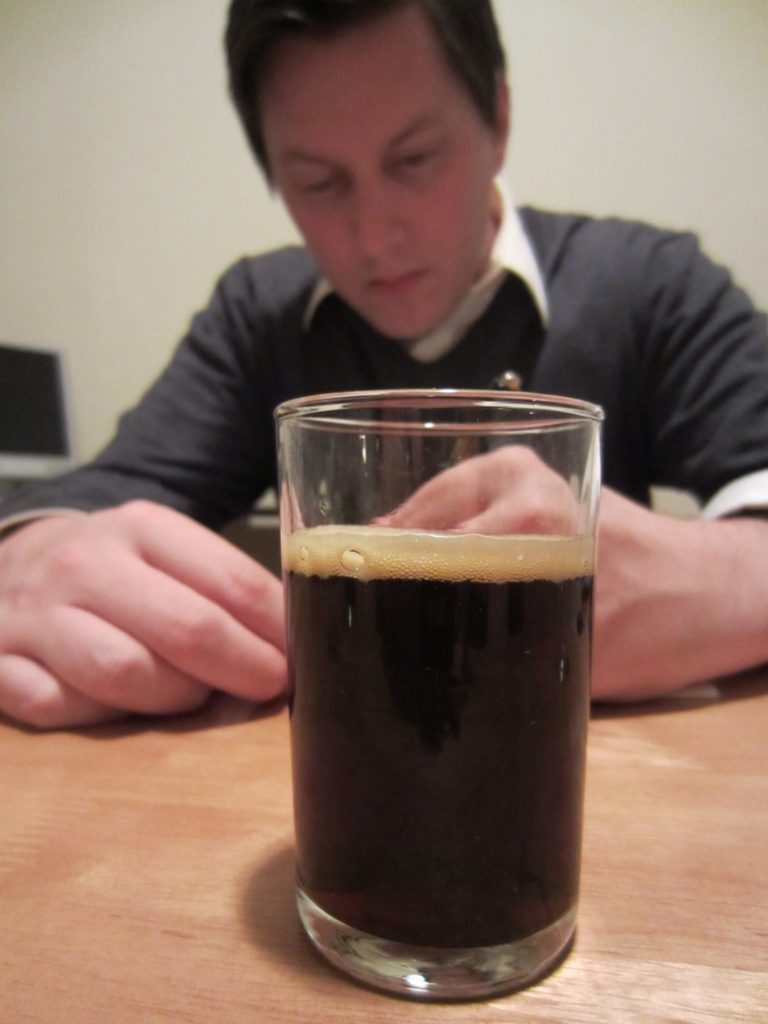 Karl: Without knowing what the sweet hell Hawberry is, one doesn’t have to know the exact flavors of these weird ingredients to know that this is still quite a hardcore bottle of beer.

Sharp, burnt flavors cover up the caramel and baked-bread tastes struggling to get out from beneath.

As we’ve seen in other Bells offerings, those red grapes peek out as well – I don’t know what’s in the grain bill throughout all these beers but it is pervasive and plenty distinctive of cellared bells beers.

Andrew calls this one a mean beer; it’s hard to disagree.

Andrew: It IS a mean beer, and I that’s not necessarily a good thing either.

Frankly, the ’09 Eccentric Ale is just too sharp, too boozy, too much.

Maybe it needs a few more years. Or maybe, as Ryan indicated it’s getting “meaner” with time. 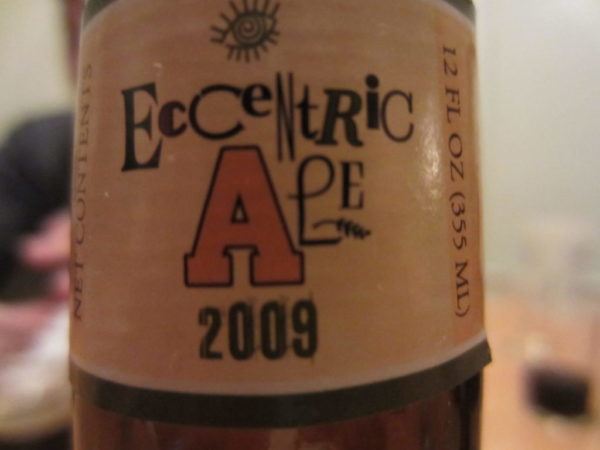 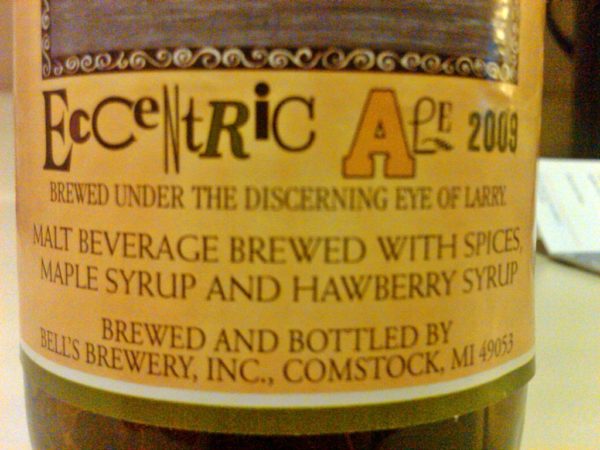 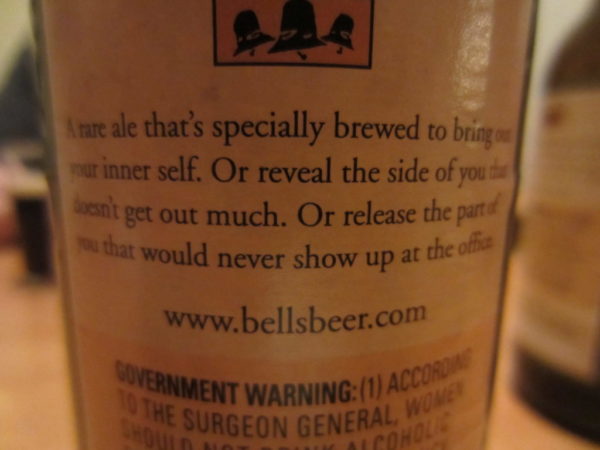 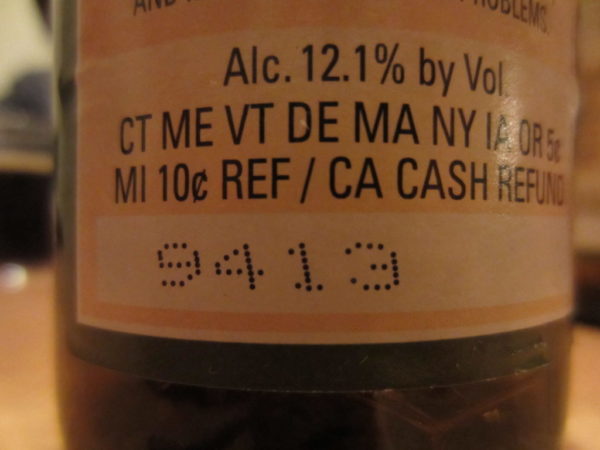 Ryan: It’s taken a while, three years in the cellar to be exact, but it looks like this beer wasn’t so mean after all. Misunderstood, perhaps, but not mean. The aggressive hop-profile that was so prevalent from a fresh pour through a two-year-old bottle has backed off significantly revealing a rich but still intense beer.

The overall minty-ness of this beer is toned down across the board, which is a good thing. There is still a lingering touch of spearmint on the nose, but it’s joined by some peanut brittle — adding a nice touch of complexity to what was once a one-note aroma.

The hops are still pretty aggressive on the palate, leading with a burst of piney hops, however the long hop tail has shortened allowing chunky peanut butter to join the party mid-sip and a heaping scoop of mint chocolate chip ice cream to finish things off. Thankfully there was no Crème de menthe to be found.

Unlike the 2008 Eccentric Ale, there was still plenty of carbonation here. There was also a definitive alcohol burn that followed each sip.

I’m not going to lie, I’m glad this beer has toned it down a bit. The first few tastings with this beer weren’t very pleasant. But now that the hops have regressed there are some fun flavors emerging. 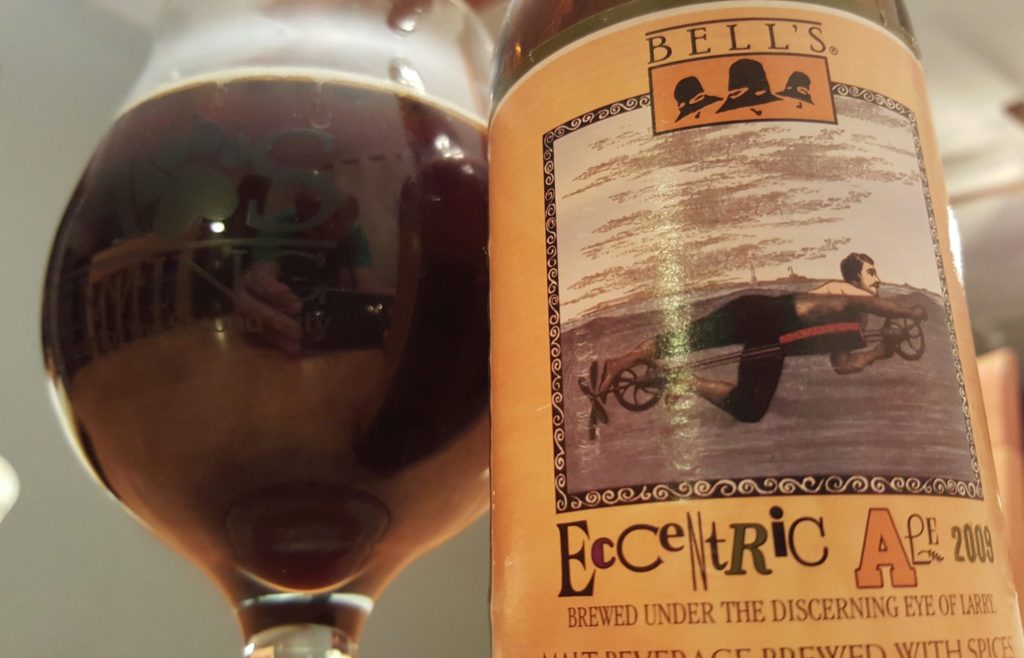 Ryan: A once overpowering and menacing beer accented by aggressive, piney hops and an overwhelming smokiness has mellowed over time and is now far more approachable and drinkable while also clinging to plenty of complexity.

Aromas of black licorice, peppermint, beef jerky and a hint of wet cardboard, a byproduct of oxidation, are first out of the snifter, which lead into flavors that can best be described as turbulent. Flavors drift back and forth between bakers chocolate, orange peel, bitters and stale coffee offering hints of a sweet and lightly fruity beer that’s yet to find its footing. An alcohol burn is nonexistent, at least from the get-go.

Let things settle a bit and the nose and palate both calm down and reveal a dessert-inspired beer fit to pair with just about any tiramisu or layered cake.

On the palate this 2009 Eccentric Ale drinks a bit bitter with flavors of French roast coffee sidling up to vanilla beans and chocolate pudding with a cherry on top.  In fact, the cherry flavors are front-and-center wafting between flat cherry cola and the sugariness of a cherry Slurpee. There’s also a bit of frothy espresso on the finish to top things off.

The alcohol burn, which slipped by unnoticed earlier, is now pretty potent, which seems about right for a beer sitting at 12% ABV +.

It’s nice to see this cellaring experiment finish on such a high note after a topsy-turvy start. If you happen to be sitting on any bottles of the ’09 Eccentric Ale I highly encourage cracking one open.