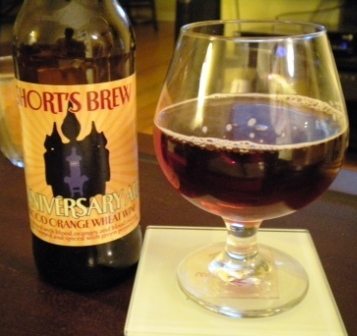 Karl: I have a pretty firm grasp on the different distinctions between beer styles thus far, but I still confuse the concept of “wheat wine” versus “barleywine.”  Doesn’t matter, as long as it’s good, right?  While I don’t think I adored this the way Ryan did – I think he’s planning on naming a child Annie “Shorty” Versary – it’s still a solid offering.

This blood orange beer packs in a surprising amount of alcohol, at about 11%.  You can really smell the orange (they apparently used 225 pounds in the brew), but while blood oranges are generally pretty sharp, tart and grapefruit-esque, here the nose and taste was pleasantly nice and round.

I’ll let Ryan wax poetic about all the other awesome things about the taste, the head, the specific weight and gravity and all that jazz – what I want to highlight here is how dramatically gentle the body of this beer was.  It was delicate, it was smooth, it was almost silken.  Even if it tasted like nothing, I’d still recommend this beer just to see what can be done with things other than huge dramatic flavors.

Other notes:  I didn’t get any of the promised peppercorn or (despite what I said about it previously this week) coriander, but the taste did developed a certain sharpness as it gradually opened up.  A little soapiness came to the forefront as well, which I detect with certain kinds of hops but didn’t negatively affect my opinion.

Ryan: Wow, if I knew it was going to be up to me to lay out the specifics of this beer I would have taken better notes – or at least ones that I could read.  No, I’m serious, can you tell me what this says?

Well, I’ll give it my best shot.  This beer poured dark, almost purple in color.  But was also rather clear.  Sound like an Enigma?  Give us a few weeks and we’ll have that review posted, too.  Anywho, right off the bat you catch the blood oranges.  You can smell them as you pour this beer into your glass.  In my notes, the ones I could actually read, I likened the smell to orange Fanta.

Take a sip and you get a bit of the wheatwine character followed by the blood oranges and orange zest.  This beer is very coating and syrupy yet also very smooth – almost velvety.  If you let it warm a little you can pick up some of the dry hopping and even the peppercorns.  You really have to hold this beer in, though, to pick up them up.  And, when I say that, I essentially mean take a drink and don’t swallow right away.  That way your whole palate is immersed in beer-y goodness and you can pick up some of the more subtle flavors.

Do I like this beer as much as Karl thinks?  Maybe.  Would I name my first-born after this beer.  Probably not.  But if it’s any consolation I want to get a dog and name it Hops.  Would I recommend it?  Absolutely!  This is a very good beer and if you run across it you should most certainly pick it up. 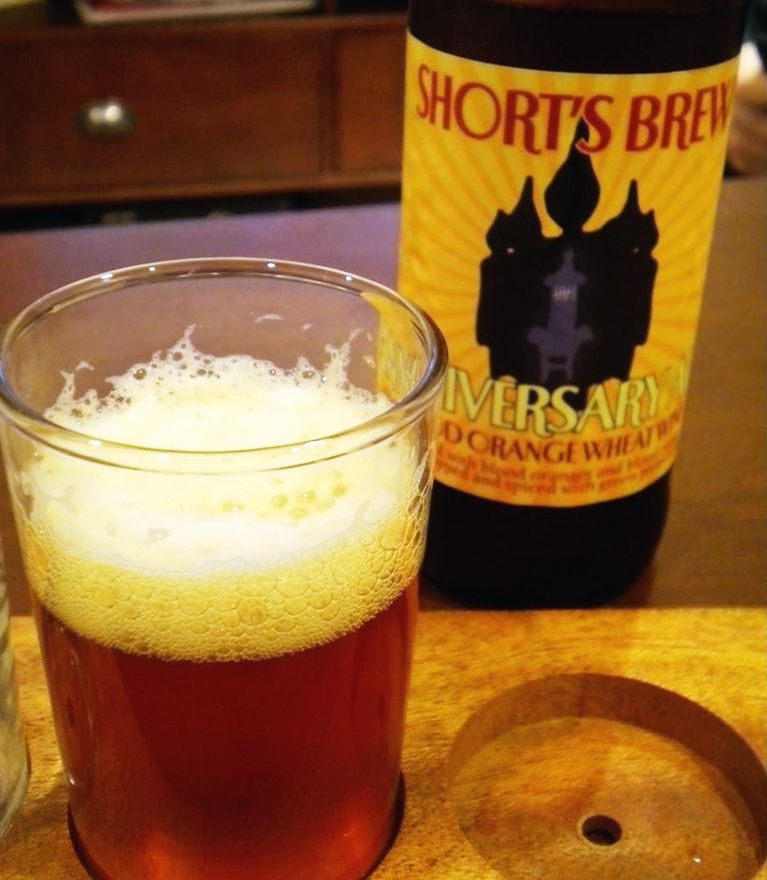 KARL: When I think about the first time I had an Anniversary, I remember two things – the sharp, up front flavors of peppercorn and coriander. With such aggressive yet delicate flavors, is it reasonable to think that they might survive after some time in the bottle? Not really, unfortunately.

The aged Anniversary pours bready, dirty, cloudy, thick. It’s astoundingly bitter after its time set aside, with yeasty bread flavors topped with sharp, unpleasant orange citrus. The peppercorn and coriander that worked well at fresh are gone; this is a two note beer and I like neither of them. Drink fresh, please, I implore you.

ANDREW: I’m a bachelor, so I have no problem admitting that from time-to-time, things go bad in my fridge. Milk is usually the culprit as I just don’t ever go through it as quickly as I plan to. But occasionally, I’ll have orange juice go bad. Have you ever tasted bad orange juice? Well…

Here’s another beer that didn’t age very gracefully. The sharp flavors you find in a fresh Short’s Anniversary just didn’t stick around long enough to make cellaring this beer worth it at all. I found that the cellared Anniversary reminded me of really sour orange juice, orange juice that has gone bad.

RYAN: Saying this beer didn’t age gracefully is kind of an understatement, Andrew. No, this beer was more of a train wreck. A fun experiment, but a train wreck nonetheless. I knew it was a crapshoot laying this down for year; what with the peppercorns and blood oranges. But I figured it was worth a shot, for the sake of science.

The old or spoiled orange juice comparison is pretty spot on. The blood oranges have gone sour, puckeringly so. The pepper is still there but not in a pleasant way. It leaves you with a spicy burn on the finish. Couple that burn with the acidic oj flavor and you have a beer that just plain doesn’t taste very good.

No sense in mincing words here or trying to pretty this beer up; don’t cellar it – it’s not worth it.