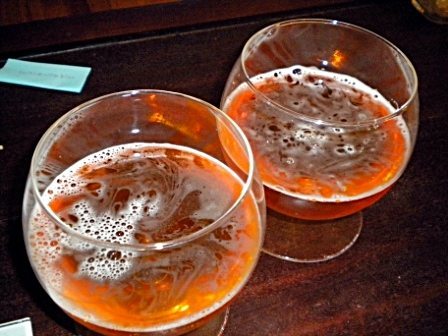 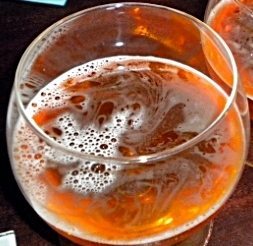 “Fermented with the legendary Ardennes strain of Belgian yeast, 10.10.10 is a Belgian Strong Pale Ale brewed with pale malt and triticale (a cross of wheat and rye), hopped with German Perle hops, and steeped with chamomile during the whirlpool stage. In secondary fermentation, we added a juice blend of Muscat, Gewurztraminer, and Sauvignon Blanc grape varieties.”

Karl: The Stone Vertical Epic series is a bunch of much-talked-about, much-desired, intensely brewed and highly sought after beers that come with a pretty decent pricetag, when you can find it.  So when the first thing that pops into your brain when you get a whiff of it is that it reminds you of another beer, that’s smaller, and a little more accessible, is that a good thing?  (Is that a long enough sentence?)  If it’s a really good beer, do you want to be anything close to derivative of someone else’s product?

When Ryan popped the cap off of the SVE10, I blurted out something to the effect of “that smells like!…like…that one, uh, New Glarus!  You know, the, uh…shit, what was it…”  We had been, shall we say, tasting for a while.  “The Berliner Weiss?” Ryan said.  And that was it.  The fresh sparkle of champagne yeasts and bright flavors burst out of the bottle.  Would they be in the glass?

The nose may have been Ich Bin Ein Berlinerweiss, but the body of this starts out all Belgian, Belgian, Super Belgian.  Thick.  Rich.  A little cloying.  Huge with yeasts and breadiness and sweetness and banana esters, minus those cloves so present in many Belgians as well.  If you want a flavor beyond that, you’ve just got to wait.

In spite of my slightly overserved brain, I knew that I’d have to hang out and give ‘er a few minutes to see what happened with it as it began to open up.  I was promised chamomile.  I was promised wine grapes.  Would they emerge?  On my notes I literally wrote the graphical equivalent of “TIME PASSES.”  Did I think I was going to forget?  Yeah, probably.

Give this one ten minutes or more, left alone (or forget about it a bit while, say, playing Call of Duty on XBox) and you start to see some movement.  The chamomile definitely emerges, almost taking over completely from the Belgian nature of the freshly opened bottle.  In addition, those wine grapes that went into the brew begin to emerge, but just a little, barely noticeable.  I can see this one benefiting from a year or two in the cellar and letting the huge Belgian qualities recede a bit, allowing the subflavors chance to elbow their way onto the scene (we’ll be revisiting this one as well in 2012 – stay tuned), but I’m still anticipating the ‘09 we recently checked out just a little more.

Ryan: You know, Stone probably could have stopped after the German Perle hops and this beer would have been outstanding.  But Stone, doing what Stone does best, upped the anti and threw in chamomile and Sauvignon Blanc grape varieties. What you get is a tale of two beers.

Now, before I go in to the day and night differences of this beer from the time you pour it until you finish it.  Let’s talk about how this beer looks.  It’s…fascinating.  I can appreciate a good looking beer but this was incredible.  It was almost like looking through a kaleidoscope.  There were all sorts of patterns forming in the beer through the off-white lacing.  And how about that color?  Such a bright, vibrant almost construction-cone orange. 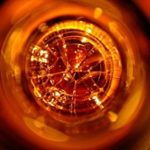 in the vortex of Stone’s VE10

To be honest, after take your first few sips, sit back and stare at it for a while.  Both because it’s pretty awesome to look at and because this beer will change drastically.  As Karl mentioned, this beer starts out  all Belgian-y.  The nose gives you loads of white grapes and the taste gives you tons of Belgian yeast, bananas and breadiness.  This was good.  But this beer had so much more up its sleeve.

Let it warm for a bit.  Walk away.  Play video games (like we did), take out the trash, do a lap around the block – whatever.  Just don’t drink it for a little bit.  When you come back to it you’ll find the chamomile has emerged in a big way.  It all but takes over the palate.  You get a lot of the grapes in the finish too.

This is an intriguing beer now and will only get better, I would assume, with time.  If reading this, or reviews on other sites, dissuades you from trying this – don’t let it.  In my opinion, this beer is so complex that it needs to be sampled in its infancy and at its peak (which I would assume would be in 2012) to truly appreciate what Stone was trying to do with this.  In to the cellar you go, Stone Vertical Epic 10.10.10.  See you in two years.