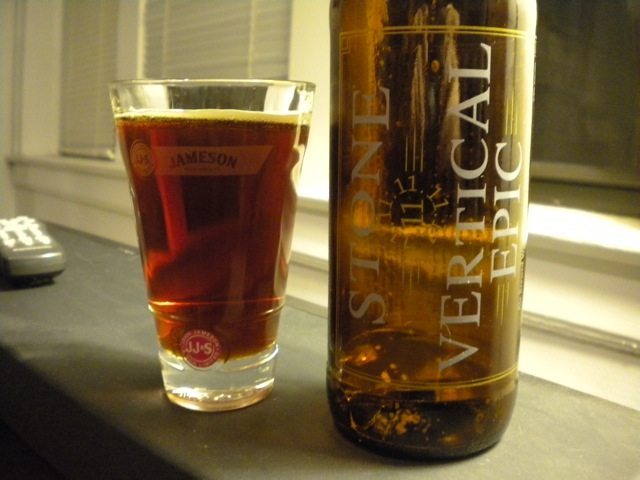 “This year’s Stone Vertical Epic Ale might justifiably be considered the non sequitur edition. We somehow came to the conclusion that adding Anaheim chilies from New Mexico’s Hatch Valley, plus whole cinnamon sticks, to an amber-hued brew fermented with Belgian Flanders Golden Ale yeast (which provides fairly intense character with lots of clove and banana overtones) would create a very tasty result. And we believe it does! The Anaheim chili is known for its rich flavor more than endorphin-inducing heat, and the cinnamon adds a nice twist…part of the promise behind the Vertical Epic Ale series itself. As with any epic, remember that it is not just the destination, but the journey.”

RYAN: When I saw that the most recent beer in Stone’s Vertical Epic series (and by most recent I mean one that we sampled last year and are finally getting around to writing) was brewed with chilies I was pumped. An almost childlike giddiness overtook me.

Chilies? In a Stone beer?

I was expecting magic in a bottle. A beer that would take me to the edge of unbridled spiciness. What I got was a restrained, mildly spicy beer that – while somewhat disappointing – also blew me away with dozens of crazy and unexpected flavors.

There isn’t much complex about the appearance of this beer; a slightly translucent deep brown in color. Take a whiff, however, and you’ll see this was meant to be far more than a “spicy beer.” Winter spices are the first to greet the nose; namely nutmeg and clove. They seem out-of-place, slightly, but I’m okay with that. A distinct plum aroma follows suit and then there’s some heat – not much – but just a teeny bit of heat.

Take a sip and you’re greeted with a super-dry, slightly spicy beer that is heavy on the dark fruits. The spice is there, it’s not overwhelming, but it does linger all the way through to the swallow. As this beer warmed more flavors emerged. In fact, I wrote down in rapid succession:

I even picked up a little vanilla and oak on the finish.

Was this my favorite in the Vertical Epic series? Far from it. But I give Stone props for pushing some boundaries and coming up with a very unique beer to nearly round out the series.

KARL: By the time we sat down to sample this one for our official tasting notes, I had already stumbled across it a few times, only to have my hopes kinda dashed by this year’s release. I’ve come to expect some pretty gargantuan flavors from my Vertical Epics, and if you look at our past reviews we couldn’t have been more gushing over the last few years of VE offerings.

The couple of times I’d been poured a VE11 before this one, I couldn’t find anything that I wanted from this brew, particularly the chili flavor. But as it turns out, this is one temperature-centric beer. Most likely the other pours had come my way too cold but I could finally get some of the promised chili flavor, back behind all the caramel sweetness. Not much, but it was there.

Beyond that, there’s not a ton to say about this year’s brew. Pretty dry, nice brownish-red color, no lacing left behind on the glass. Sadly, I think the VE11 will likely go down as one of the less popular yearly offerings in the VE series, based just on my perception of demand – while all the other years were snatched up almost immediately, every now and then you can still find a tap-handle or a bomber of VE11 in a bar or on a shelf somewhere. No one was rushing out to grab this one, it appears – but I’m still looking forward to seeing how this one ages alongside the pantheon of other Vertical Epics.

ANDREW: Remember that old TV commercial, “Where’s the beef?!” Well with 11.11.11 Vertical Epic I kept thinking, “Where’s the chilis?” Perhaps if this beer had been brewed by about any other brewery, I wouldn’t have been so disappointed. But this is Stone, man! Brewers of ANGRY beer, right?

Now, it must be admitted that there was a ton going on here, I picked up notes of cinnamon, malts, bananas, cloves, and the dry finish is about all I picked up from the chili.

All in all, a very tame beer that I would probably classify more as a winter warmer than anything else. Maybe that’s fitting since we posted our review of Goose Island Christmas earlier this week…