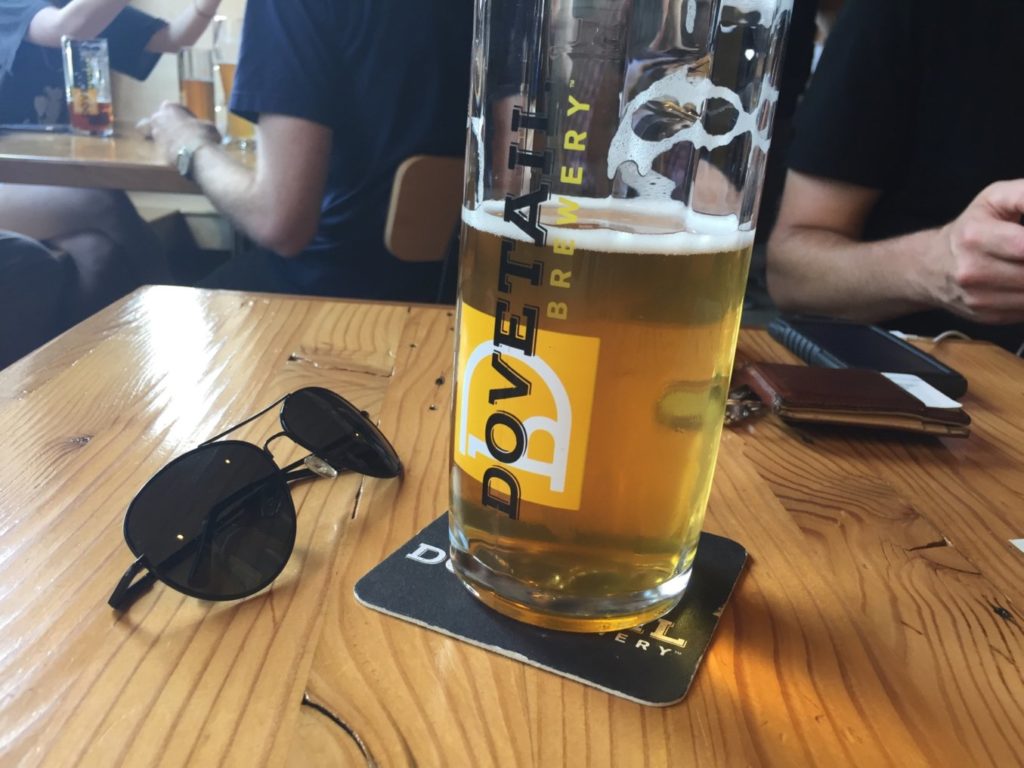 The season’s now done, but here are a few of the summer beers that have impressed us since June 21. (Hey, that rhymed!)

Sadly, summer is on its way out the door. The 2017 Summer Of NEIPA didn’t go ignored by us here at the GDB desk, but overall our palates were still stuck on lager, pilsner, the occasional milkshake IPA, some good ol’ pale ales and more.

Before we happily welcome the world of brown ales, porters, stouts and harvest beers for autumn and winter, here’s a look at some of the beers that shook up our palates over the last few months:

Dogfish Head’s SeaQuench Ale: When I think back about this summer, I can’t claim to have drank a ton of SeaQuench but it is the first thing that springs to mind in terms of peak new summer beer experiences this year. My SeaQuench of note came on a hot, sunny, late-July day on a patio in northern Michigan and proved to be just the right mix of Berliner-tart lime juice, a bright Kolsch-y biscuity spine and a lip-smacking level of thirst quencher-y.  Definitely one for the cooler on those days that crack 90 degrees or more.

M-43 NEIPA: I admit it, the hype got to me too — I definitely wanted to give this a shot this summer after Ryan’s praise of it, and I’m glad I did. I was lucky enough to find one of these in the cooler after an afternoon and evening of wandering the Lincoln Square neighborhood beer and even though it’s not the greatest NEIPA I’ve had, it’s definitely in the upper rankings. The as-promised haze is backed up by a creamy body rich with Gummi-Bear candy, appropriate levels of juiciness and was a welcome change of pace after a long day of taproom wandering. (More on this one below.)

Solemn Oath’s Old Faithorn: Very few pale ales make their way into the rotating roster of usually-in-my-fridge status. This one made the cut a few times this season, putting it up there with Fist City, Sierra Nevada and BrickStone’s APA. Nice copper color and a snappy little toffee malt eases into a reasonable level of hop bitterness with some mint and pine popping in here and there.

Dovetail’s Summer Lager: Just the right beer for an early-afternoon sipper on a summer day. Lightbodied, easy drinking and still rich with flavor that never had me considering for a second that it was just a watered down, weaker version of anything. I don’t know if there’s much more to say about a straightforward lager in summer — it just plain makes sense. I bet this would be killer with some iced tea and a wedge of lemon.

Brewery Terra Firma’s Black Bikini Coconut Porter on Nitro: A summer porter? If there is one, you know I’d find it — and this is it. Chock full of roasty malt notes and just fullbodied enough to have some heft while not being too much for a summer sipper. A nitrogenated pour accentuated the lightly toasted coconut notes that really made this one sing. It even beat out one of my previous favorite BTF beers, the My Summer Boyfriend blend of lemon wheat and honey basil beers. Only by a little, though.

Moody Tongue’s Grapefruit Pilsner: Another beer that I only had once this summer but had me thinking about many more in the future. Tired of the hearty citrus-bomb IPAs jacked up with acid and pith? Get your hands on one of these: sharp, well balanced between pilsner malts, gentle hops and tempered grapefruit tartness — razor sharp, crisp and tight. 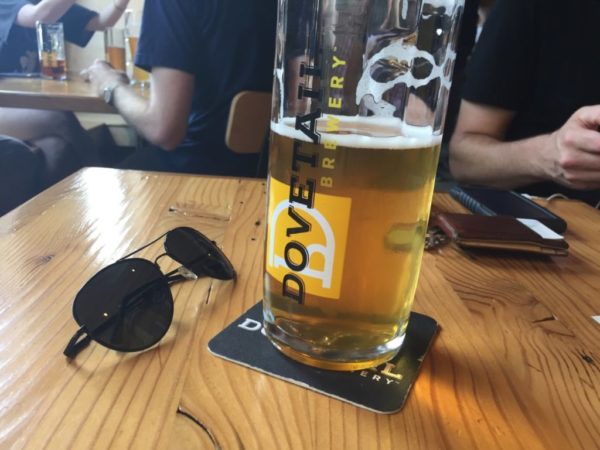 Old Nation M43: The hazy IPA that started it all for Williamston’s own Old Nation Brewing Co. In June, I wrote about how the haze craze began, and M43 was the beer that started it all. Orange juice-like in appearance, with big tropical notes on the nose and palate with hardly a hint of bitterness, M-43 became a summertime staple. It pops with vibrant splashes of peaches, apricots, mango, pineapple and grapefruit. And when I needed haze with a bit more complexity and dimension, Old Nation’s Greenstone was just a growler pour away.

A bunch of beer from Samuel Adams:  At the beginning of the summer, Sam Adams sent over samples of their lengthy lineup of summer beers, which thankfully was mostly devoid of trendy IPAs and was instead filled with drinkable, approachable and mostly true-to-style beers. Favorites of the bunch included: Golden Hour Helles, a creamy, citrusy and slightly herbal lager that hit all the right notes; a quintessential lawnmower beer. While I have no point of comparison on what yuzu tastes like, Tropic of Yuzu was a fun take on a fruit-infused ale. Featuring loads of passion fruit on the nose and palate with a bit of spice and a smooth finish, this was one of the beers I wanted a full six pack of. Finally, Berliner Weisse packed effervescent and lively carbonation in a tart and refreshing package.

Pyramid Outburst Imperial IPA: It has probably been a decade since I’ve had a beer from Pyramid. Their apricot ale was once a regular in my rotation, back when I was still finding my palate. The brewery sent along samples a few months back, showing off new styles and old plus some redesigned packaging. The apricot ale was as I remembered but the Outburst really stood out. The double IPA hit peek perfection in terms of sweet malts and resiny, piney hops. Despite clocking in at 8.5 percent ABV Outburst was quite drinkable, although a slight alcohol burn was present. Pyramid H7, an unfiltered imperial IPA was a close second and trended more bitter than sweet.

Burnt City Retrofit: Fun fact: Karl and I both have birthdays in July. Several years ago we orchestrated a large, group birthday party and served homemade shandy’s made with equal parts Sam Adams Boston Lager and lemonade. The heft and graininess of the lager cut the sweetness of the lemonade. Retrofit reminds me a lot of those shandies, in that it wasn’t overly sweet, nor was it very watery – although it was a tad tart. Oh, and it’s made with limes and not lemonade.

Urban Artifact Finn: A Berliner, pale ale hybrid from the Cincinnati brewery begins with the tartness of a Berliner weisse, shifts to peach and apricot mid-sip and finishes crisp and dry. Absurdly refreshing, this became a nice summer go-to.

Dovetail Lager: Would you say I were crazy if I told you I spent a weekend in Chicago over the summer and the best beer I had was Dovetail’s lager? And before you say I must not have drunk much, I drank plenty and sampled a wide swath of beers, albeit mostly from neighborhood favorites Half Acre and Begyle. In fact, I think I damn near tried every beer Half Acre released in the three months leading up to our July visit. And still that lager from Dovetail stood out, although some of those Begyle and Half Acre beers were really, really good. The lager is crisp and yeasty and biscuity and grainy with subtle apple sweetness. Desert. Island. Beer. Oh, and the Hefeweizen was really good too. And the Maibock, and the Vienna Lager… 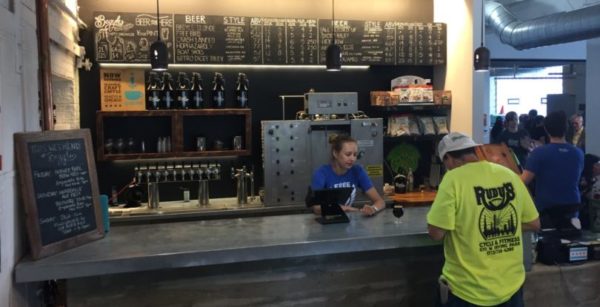 Noon Whistle Gummy Vortex: My introduction to this Lombard brewery set a high bar. A New England-style IPA, it hits the juicy and hazy parts of that fad, but isn’t as thick as some others – which was great on a summer day. Refreshing, citrusy and 7.5%, I’m looking forward to trying the others in what I hear is an impressive Gummy series.

New Glarus Strawberry Rhubarb: The hype is real around this 4% fruit beer. Rhubarb bitterness is offset by sweet strawberry just like the pie. Such a great summer beer in such limited supply, here’s hoping this is back next year. Or sooner.

Buckledown Grapefruit Belt & Suspenders: The flagship IPA from this Lyons brewery gets the grapefruit treatment, elevating an already solid beer. The grapefruit was light, refreshing and almost helps it to dance somewhere between an IPA and a shandy.

Lagunitas Born Again Yesterday: Loved last year’s Born Yesterday pale ale and this one is even better. It’s hazy and light, tropical and dank, hoppy and smooth. There’s more flavor and hops than what you’d expect from a pale ale, but that’s OK by me.

Third Space Unbridled Enthusiasm: During a trip to Milwaukee, I kicked the tires on this year-old brewery and was impressed by everything in my flight – topped by this Double IPA. 80 IBU and 8%, it delivers a hop punch, but brings the citrus fruit flavor, as well.

Windmill Memes & The Giant Peach: With a starting point of Memes & Dreams – a “milkshake-style” IPA with mangoes, lactose and vanilla beans comes the doubled-up version with peaches. Its 9.4% ABV is hidden well behind its cloudy wallop of peaches.

What’s your summer beer of the year, and why are we betting it’s a NEIPA? Let us know on Twitter.