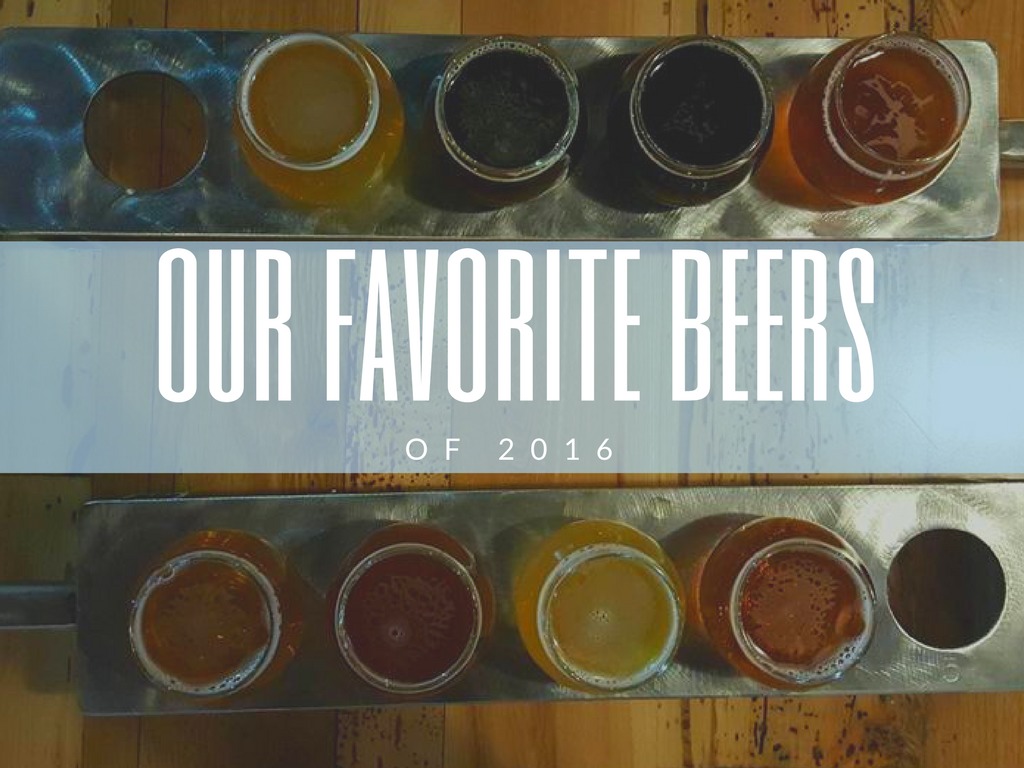 Before we officially close the book on 2016, let’s look back at our favorite beers over the past year.

Before we close our tastings notes on 2016, we thought it might be fun to take a look back at some of our favorite beers of the year. They include big, bold barrel-aged beers, session beers and plenty of pale ales and IPAs.

Keep in mind, this isn’t an all-encompassing list of the best beers of the year. Rather, it’s a rundown of the beers we enjoyed most often or the beers that captured our attention over the 366 days that made up 2016.

Without further ado, here are our favorites from 2016:

Homebrewer Chad Bevers initiated a Kickstarter campaign to help him fulfill his dream of opening a downstate brewery and he has hustled his way to countless bottle shares and beer festivals – building supporters and fans with each stop. I was lucky enough to try the Liquid Mounds Bar at a Northwest Indiana bottle share and was blown away – it tastes just like it’s named: a liquid Mounds bar, complete with little coconut flakes visible in the glass. The beer is far better than the tired, SMH marketing gimmick they use  (“tap that beaver,” “for beaver lovers,” “everyone wants a lil beaver” and the beer named “Big Hairy Beaver,” for example) and as they make their way through the TTB filing process, here’s hoping their soon-to-come brewery leads to bottles on Illinois shelves very soon (and the adjustment in marketing strategy once they realize that women might want to feel invited to buy their beer too). (Steve)

New Glarus Bubbler Hefeweizen made a bit of a splash this summer as it was part of what I’ll deem the infamous Wisconsin Bubbler Beer Wars. However, once hitting the market, it seemed to sort of get lost in the shuffle. A pity, since I’d consider this little Hefeweizen a beer of epic proportions. Perhaps the little sister of Dancing Man Wheat, this open fermented beauty gushes with aromatic banana and cloves with subtle lemon-rind effervescence. In the mouth, fresh cracked wheat, banana cream, and tart lemon flavors exhibited a balance and finesse, right up there with the best German Hefe’s around. (Ben)

I went through a stretch last year where I was off hops. I was a little burned out on IPAs and was rebelling some against what now appears to be the waning trend of making a balanced beer unnecessarily hoppy. Enter Third Bear. Saugatuck bills this beer as a happy medium — not too hoppy, and not to sweet. And it’s as advertised. Third Bear is bready, earthy and woodsy with notes of caramel and banana, a medicinal hoppiness and a clean finish. The perfect summer fling. (Ryan) 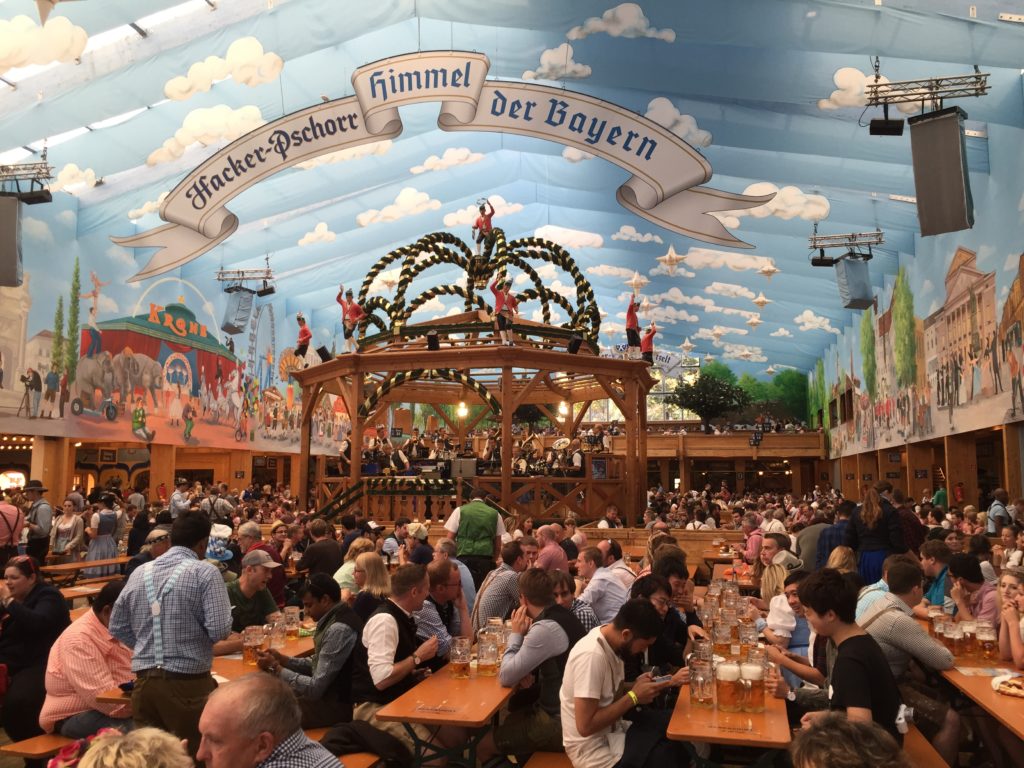 As part of a trip bouncing around Europe this year, I had the opportunity to visit Oktoberfest in Munich. If you are a beer fan, you really do have to go to Oktoberfest at least once in your life — and say what you will about ze Germans, you have to respect a country that sets aside three weeks of the year to party ridiculously hard and drink a metric shit ton of beer. The first tent we visited was the Hacker Pschorr tent and while most festbier pretty much tastes the same (especially after zwei or drei Maß) you can’t imagine a more memorable, special pour than your very first stein of beer at Oktoberfest. (Karl)

Garage Project Death From Above

A trip to Sydney last year introduced me to this pale ale brewed with mango, Vietnamese mint and chili (probably not fair to call it a pale ale after all of that) and I’ve never tasted anything quite like it. Citrusy and hoppy, with four different hops, it brings just a slight bit of heat, as well. As my son studied abroad there in the spring, he had orders that he couldn’t come home without stopping in Wellington and grabbing Dad a couple bottles. Imagine my surprise, then, when it began popping up on Illinois shelves this winter, thanks to the forward-thinking folks at Tenzing, a part of Breakthru Beverage historically known for shipping high-end wines. Chicago is one of just two U.S. markets where the beer is available and it’s well worth grabbing if you see it. (Steve)

If Good City Brewing’s Motto Mosaic Pale Ale is a taste of what’s to come in Milwaukee’s growing brewery scene, then things are looking on the up and up. I’ve been a bit of a fanboy of Mosaic hops as of late and this beer does a fantastic job of coaxing out every last drop of Mosaic’s complexity. In the nose, this beer is a tropical fruit salad of overripe pineapple, sticky mango and a hint of fresh kiwi. In the mouth I get luscious peach, tropical Starburst candy, piney mango and touch of dank spruce. I simply can’t get enough of this beer and look forward to what’s to come from this brewery and the burgeoning Milwaukee brewery scene. (Ben) 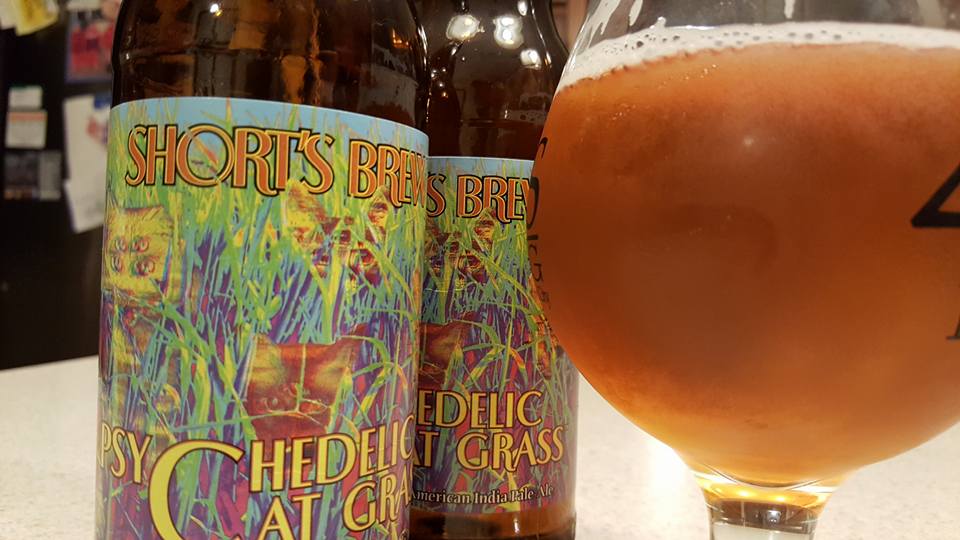 Short’s partnered with its Michigan distributor, Imperial Beverage, and distribution partners in other states to get what might be the freshest beer ever out to retailers in a ” Without Delay IPA,” release. Short’s bottled Psychedelic Cat Grass, an American India Pale, beginning at midnight on Aug. 17. Hours later the beer was on Imperial Beverage trucks heading out to retailers across Michigan, with much of the beer delivered to accounts by 7:00 a.m. and all beer delivered by 5:00 p.m.. It was a huge lift for Short’s and an even bigger one for Imperial Beverage, which juggled the logistics of delivering beer to stores and bars all over the state in a tight time frame. The result was a vibrant and lively IPA zinging with mango, pineapple and grapefruit capped off by a crisp, bright finish. (Ryan)

When my birthday rolled around this summer, I realized that despite the many, many beers I’ve loved from them, I’d never actually been to the New Glarus brewery. Since there is never a bad time for a mini-road-trip and those country back roads were calling to me, I figured this would be the year that I fixed that, and so we headed out for some beers amongst the “ruins” of the NG beer garden. I initially had their classic Wisconsin Belgian Red as the top beer of our visit and it’s still fighting for the top spot but man, I would love love love to get my hands on another sixer of the Kellerbier. Crisp, bright, clean, sweet, sparkling, just beautiful, pretty much perfect. Especially on a perfect sunny summer day overlooking the rolling hills of the Wisconsin landscape. (Karl) 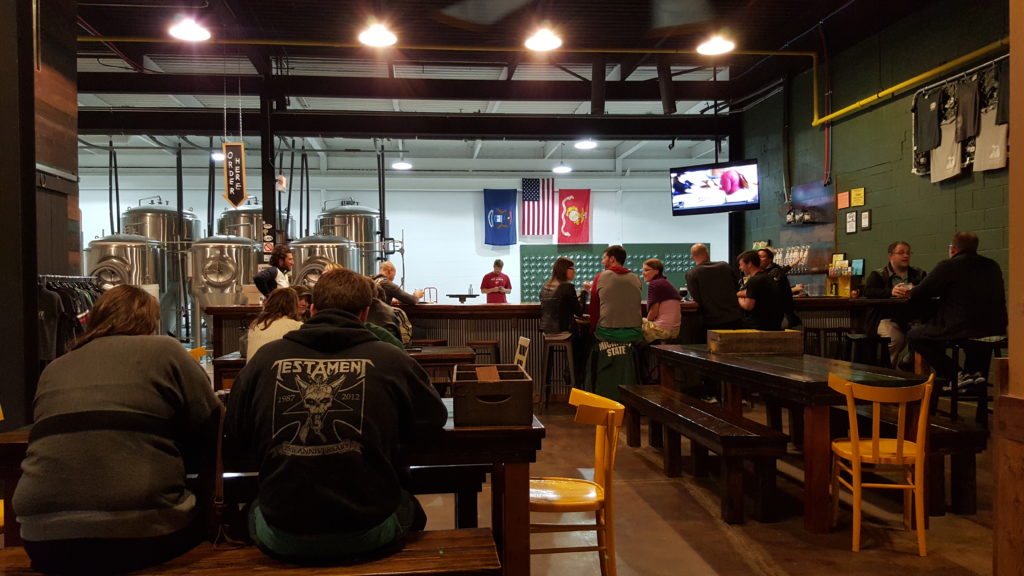 The taproom at Ellison Brewery + Spirits

Ellison is quickly becoming our go-to taproom in East Lansing. The barely-over-a-year-old brewery is nestled back in a dead-end industrial corridor. The interior carries a Begyle-like look and vibe, minus the space-age growler filler, and their beers are similarly fantastic. Ellison excels at stouts and IPAs, a rare one-two punch for a young brewery as the styles are so vastly different. And one Double IPA in particular kept me coming back time and time again — Relativity. Clocking in at 8 percent ABV, Relativity is teeming with passion fruit and tropical hops on the nose and palate, with a smooth maltiness providing needed balance. Caramel and honey dance with grapefruit zest and tangerines, clearing out for a piney but not overly bitter finish. (Ryan)

Maybe my favorite new beer of the year. Brewed in collaboration with Dark Matter Coffee and the band Mastodon, which has an album of the same name, this beer was dedicated to the memory of the 14-year-old sister of Mastodon’s drummer. It also raised funds for Hope For The Day, an organization that raises funds for suicide prevention programs and helping families deal with loved ones’ mental health issues. From the nose to the taste, it’s a marvelous blend of dark coffee and wood, chocolate and even more coffee. Simply amazing – and Dark Matter released a coffee version, as well. This beer is worthy of brewing more often, for more reasons than one. (Steve)

Lagunitas The 12th of Never Ale

Looking back at my year in beer, there is not a beer that occupied more real estate in my refrigerator than Lagunitas The 12th of Never Ale. This beer ticks all of my boxes for excellence. At the right temperature, it’s got intoxicatingly complex aromas of passion fruit, grapefruit zest, gooseberry and faint wafts of coconut. In the mouth all of the tropical aromatics hang gracefully on your palate, yet this beer remains hardly bitter and really quite lean, making it super approachable and fun to drink. From the brewery that said they’d never get into the canning game, I’d say this is a heck of a start. (Ben) 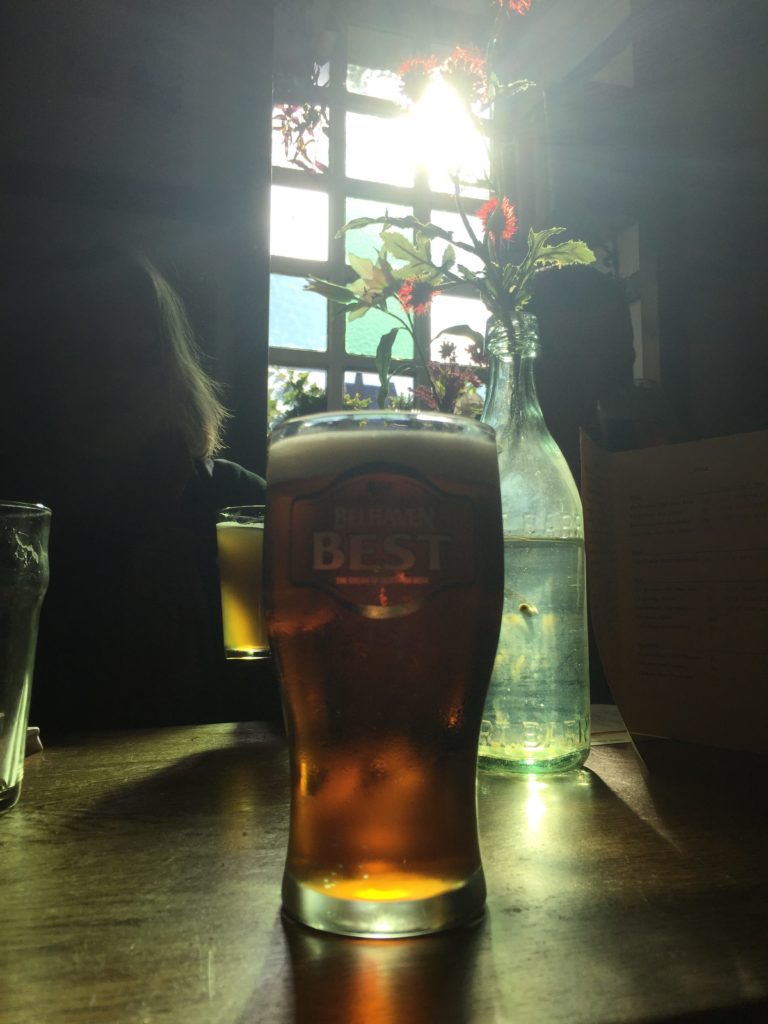 Similar to the aforementioned Hacker Pschorr Festbier, we did get to spend some time in Scotland where we drove a lot, saw a lot of Highlands (and a lot of sheep) and drank a ton of cask beer, most of which was Belhaven Best. That whole time span helped me wrap my head around what a real cask-happy community of drinkers the UK has, and despite learning to appreciate it a little better I still don’t think it’ll ever really catch on here – but that doesn’t make it any less rad to have had it over and over again on the hand pull. Loved the mouthfeel, loved the herbal, garden-like profile of that UK hop blend, loved the dark toffee and caramel-y malt bill that builds up this Scottish classic. (Karl)

Greyline Mosacca IPA: Keep an eye on these guys. Very promising stuff.
Fallen Brewing’s Chew Chew Salted Caramel Milk Stout: Had one on our final night in Inverness. Memorable for more than just the location.
Founders Lizard of Koz: I didn’t think blueberries would work packed onto a chocolate vanilla stout. I was wrong.
Busch Light, silo can, PBR Bar in Louisville: Like I said, sometimes it’s all about the surroundings and your company.
Surly Darkness: If this was part of Todd Haug’s plan to leave Surly on a high note, he certainly did it with this year’s version. Just a great imperial stout.
Jester King SPON 3: If you got a taste of this methode gueuze at this year’s FoBAB, you know what I’m talking about.
Dovetail Lager and Hefeweizen: Who knew that what Chicago really needed was some good local Bavarian styles? Dovetail did.
Brewery Terra Firma My Summer Boyfriend: A blend of a lemon wheat and a honey basil beer that was way more than the sum of its parts.