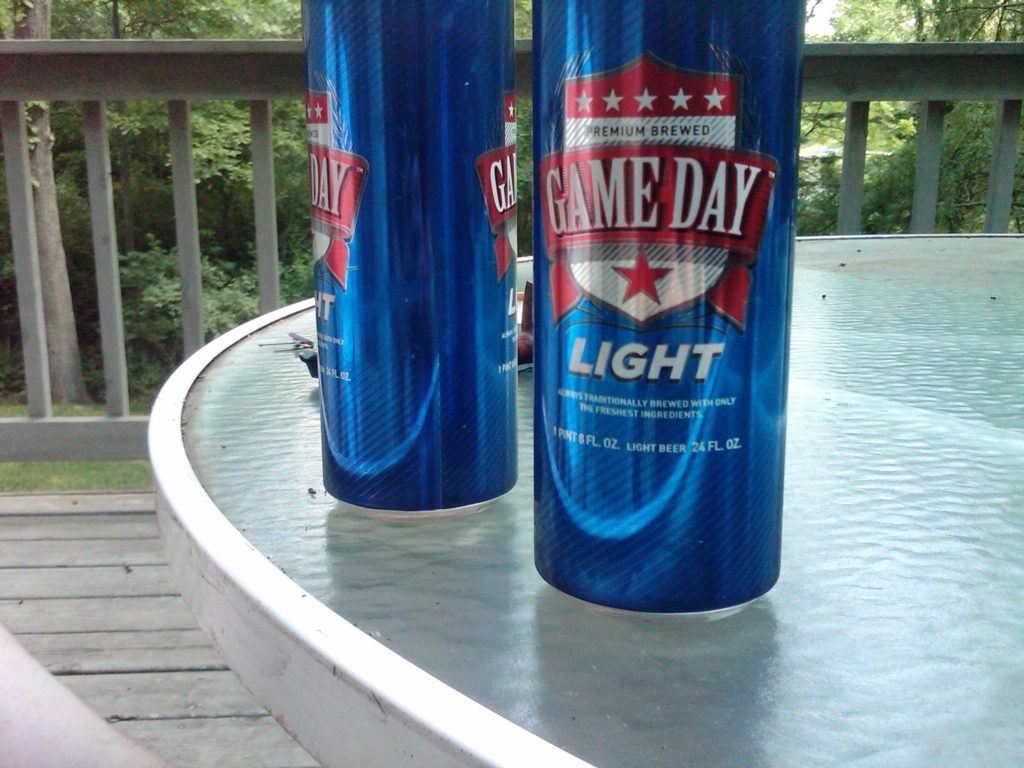 “American beer drinkers are seeking great-tasting beer at an affordable price.” Even more so in this tough economy, they’re looking for value and ways to make their dollar go further. Game Day satisfied two of a beer drinker’s interests by offering a premium lager beer at a below-premium price.”

What day was it this weekend? Game Day! For better or for worse, Ryan had (perhaps not so) kindly tracked down a few cans of the finest vintage of 7-Eleven brew that could be found. It was a beautiful weekend afternoon, the sun was shining, the birds were chirping, the hornets were basically avoiding us, and we each had a silo can of Game Day Light in front of us. It was gleaming silver and the logo said “I might be a Bud Light if you squint just right,” and it was ready for intake even if we weren’t.

If you haven’t heard of Game Day they’re the second try at an entry to the alcoholic beverage market from 7-Eleven. The first was an attempt to horn in on the Corona and Landshark market with their Santiago brand. Since you’re probably a beer geek like us you’ve probably heard of it in passing, and since that’s as far as it got you can tell how successful it was.

Normally, beer reviews are full of tremendously descriptive words because beer drinkers love reading thesauruses and playing Trivial Pursuit while imbibing. Drinkers of Game Day are more likely to read nothing but captions to pictures in Highlights and play nothing more literary than games of Hungry, Hungry Hippos. And as such, there is absolutely nothing to this beer. And when I say nothing, I mean it’s like drinking a vacuum. Game Day Light is an un-beer. It tastes like fluid that has been inside an aluminum can and nothing more. At best, it had a temperature. I cannot tell you how much I didn’t taste this beer. 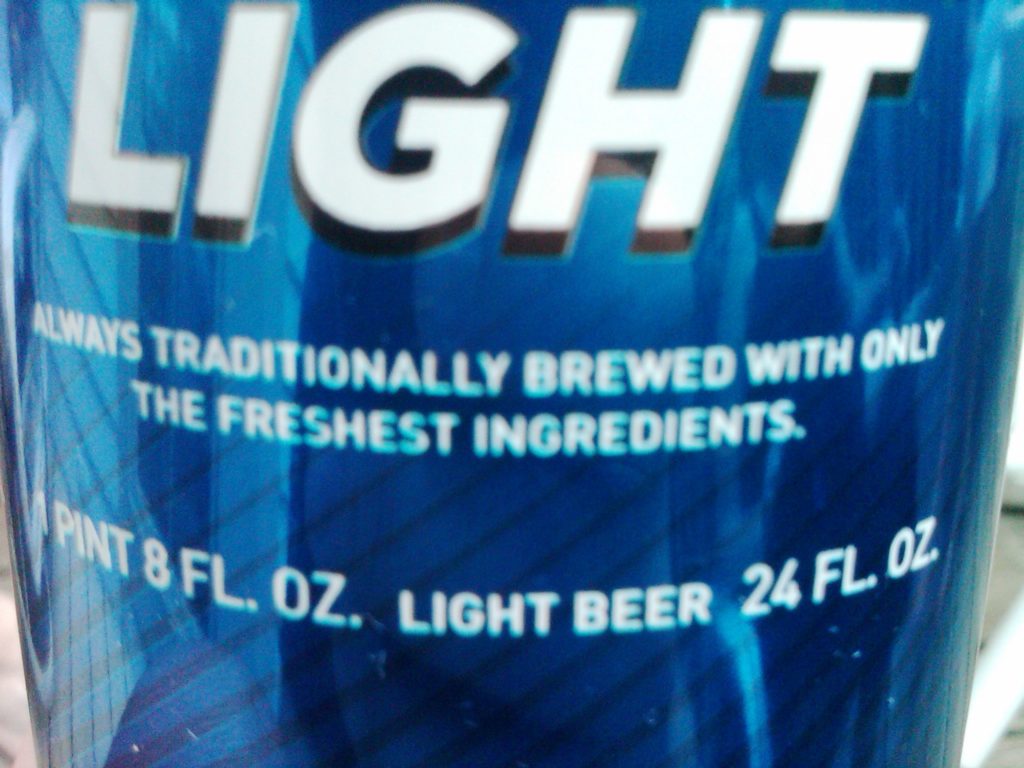 is anyone else confused by this?

I would have been happy to write about how terrible it was, about how you should never purchase Game Day Light, about how awful an idea it was for 7-Eleven to try to brew their own beer which, for what it’s worth, was contract brewed by Lacrosse Lager in Wisconsin. I’d have loved to have been a fly on the wall for that conversation between the 7-Eleven executive and the brewer.

Executive: “So when you make this for us, do us a favor and leave out the flavor. I don’t know how you do that, but…well, just don’t let it happen.”

Brewer: “As long as the check clears, I’ll put tap water in the can if you want.”

Executive: “That’s not a bad idea. Can you add a little alcohol to it? But just a little – we want people to not get too drunk so they buy more cans.”

Seems likely. Game Day Light is like that magic trick where you pour water into a glass and the water instantly disappears. I can’t tell you to never drink it, because you probably wouldn’t even notice if you were.

As for the Game Day Ice, well, it’s worse. 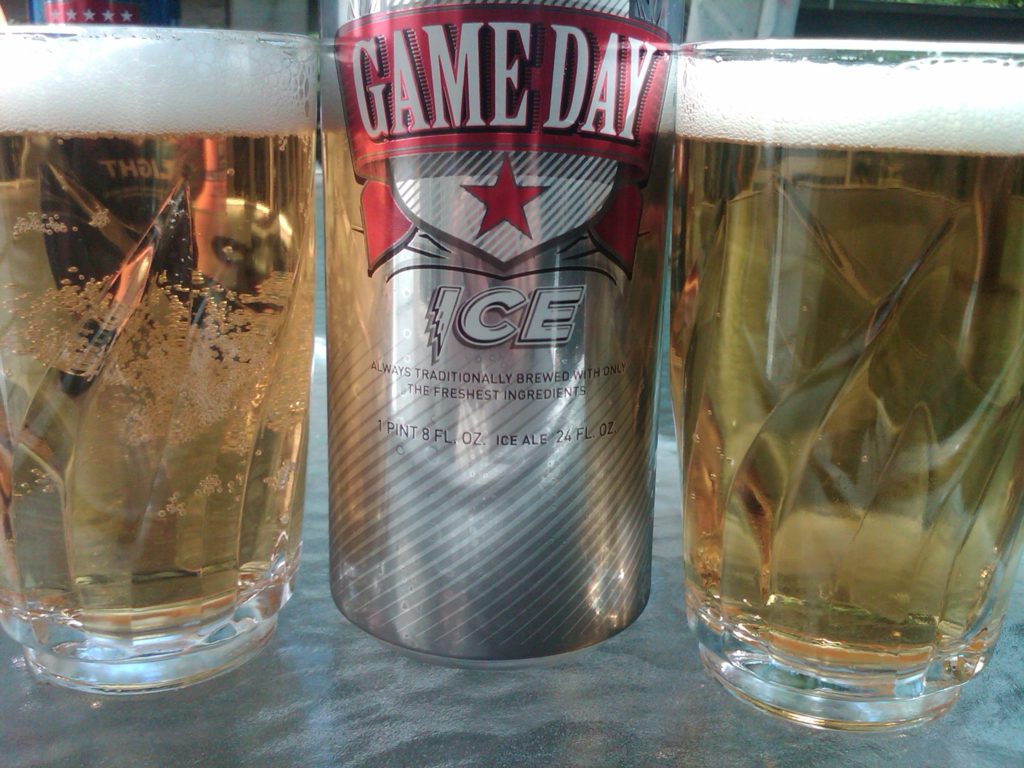 It almost has the funk of a bad malt liquor, without the enjoyability of pouring back a full 40 ounces of swill. 24 ounces of a weak facsimile of Colt 45 doesn’t strike me as a good way to try to enter the high-alcohol Ice Beer market, which apparently still exists? The taste as a mix of really bad cough medicine and apple juice.  If you see someone taking a can of this out of the 7-Eleven fridge and he says he’s buying it to “get wasted?” Take the opportunity to instead buy him a cherry Slushee and pour some vodka into it, then tell him about the many high-alcohol beers that you can buy that are actually quality, which are sold in stores that don’t also feature issues of Guns N’ Ammo and packages of Red Man Chewing Tobacco.