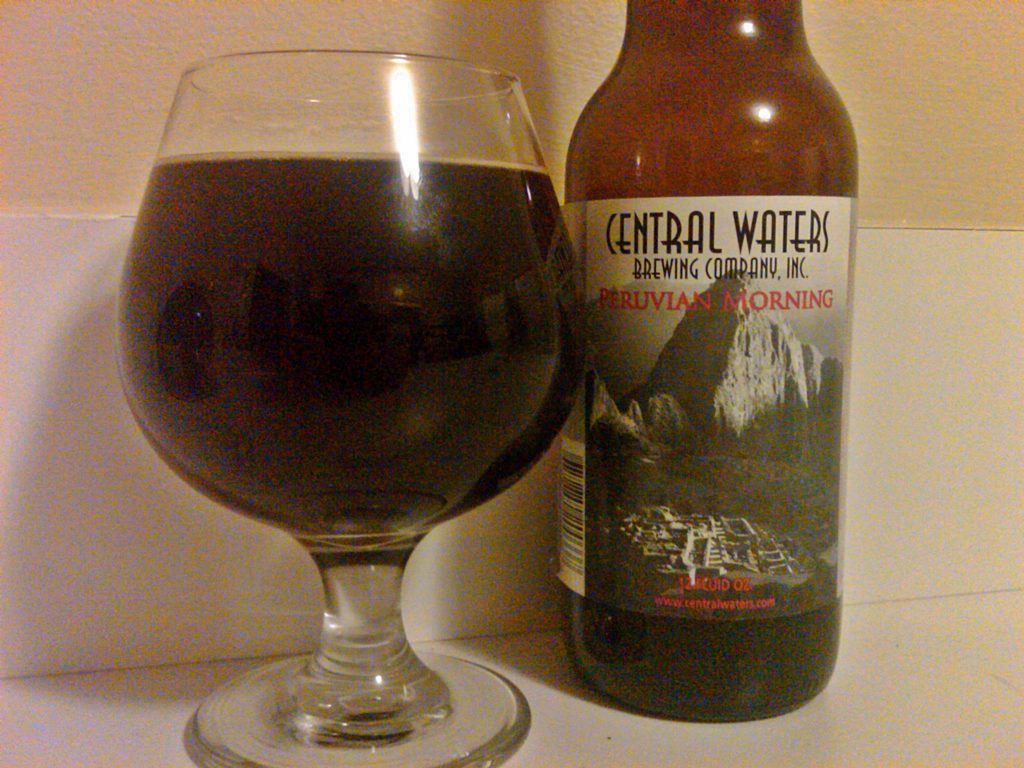 “A Bourbon Barrel aged Imperial Stout made with freshly roasted Emy J’s Coffee. This beer is as complex as it gets. Flavors of vanilla, tannins, and coffee meld together to create a flavor as deep as the ravines of the Peruvian Andes!”

Ryan: Have you ever come across a beer that sounded amazing from the bottle description, but then didn’t quite live up to your expectations?  I should have loved this beer.  Bourbon barrel aging – love it.  Imperial stout – head-over-heals for it.  Beer brewed with coffee – an all-time favorite.  But this was probably my least favorite of the spaced out samplings of Central Waters bourbon barrel aged beers I tried a few weeks back.  That’s not to say it’s a bad beer.  But what I pictured in my head isn’t quite what came out on my palate.

This beer poured an opaque black with a thin, tan head that fizzled away fairly quickly.  The nose gave off huge whiffs of bourbon, roasted coffee and burnt…something.  I can’t quite put my finger on what that burnt something is, though.  Maybe it’s burnt coffee?  Like the thin puddle of coffee that sits at the bottom of the pot for way too long.  I think I’m going to stick with that for now.  Sadly, taking a sip of this beer may have confirmed that burnt coffee hypothesis. It’s kind of hard to describe, but it tastes a bit like burnt coffee, charred wood and burnt raisins.  Maybe those were the tannins mentioned in the commercial description?

Once you get past the initial burnt flavors you’re hit with some bitter coffee and a sweet bourbon aftertaste that lingers for quite a while.  There was also a milk stout sweetness akin to putting too much creamer in to a cup of coffee.  The body is surprisingly thin on this beer.  I expected something a little thicker in a barrel aged, imperial coffee stout.

Overall, there was just a lot happening with this beer and I couldn’t get past, nor could I really wrap my finger around, the mixture of burnt flavors and that milk stout-like component.  I may pass on the 2011 offering when these beers are released after the first of the year.