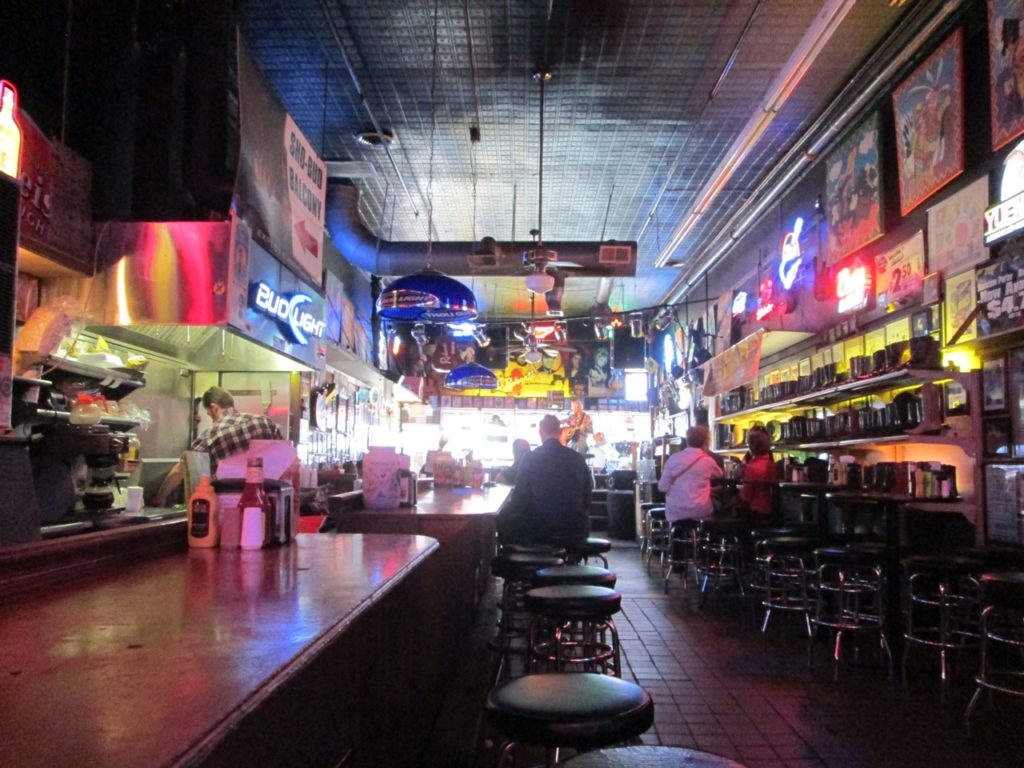 Earlier this year, you may remember our Chicagoan’s Guide to Drinking in Cleveland. Rather than a straight list of beers to try, or bars to go to, or a travelogue of things to do, we thought it’d be better just to tell you how we drank in that fair city.

I tend to think in a fairly hyperlocal manner here in Chicago about our beer, and my thoughts don’t stray too often to the South. Whether or not that’s because the beer just doesn’t make it up here, or because there still isn’t a whole ton of craft brewing in the south (I think it’s the former), believe it or not they’ve got a lot more good beer than you’d expect. My assumption was that I’d be resigned to average swill in any number of country bars. I was (mostly) wrong.

Something to remember right up front: I don’t honestly mind drinking what I just referred to in the last paragraph as “average swill” as long as it’s in the right circumstances. You’re going to see that those circumstances are on full display in Nashville. Yes, I’m trying to pre-emptively get in front of the “oh look at the craft beer guy who went to Nashville and just drank a bunch of High Life and shitty weird liqueur” commentary a little, but regardless, if you can’t relax long enough to suck back a High Life when necessary you probably don’t belong here anyways.

Here’s what I learned about drinking down south, which as was the case last time, doesn’t always include beer.

1) Get to Know Yazoo Brewing early.

I’m not sayin’ you gotta go to the brewery — although you’re probably going to walk right past it when you go to Arnold’s for lunch one day. You know, like I did: 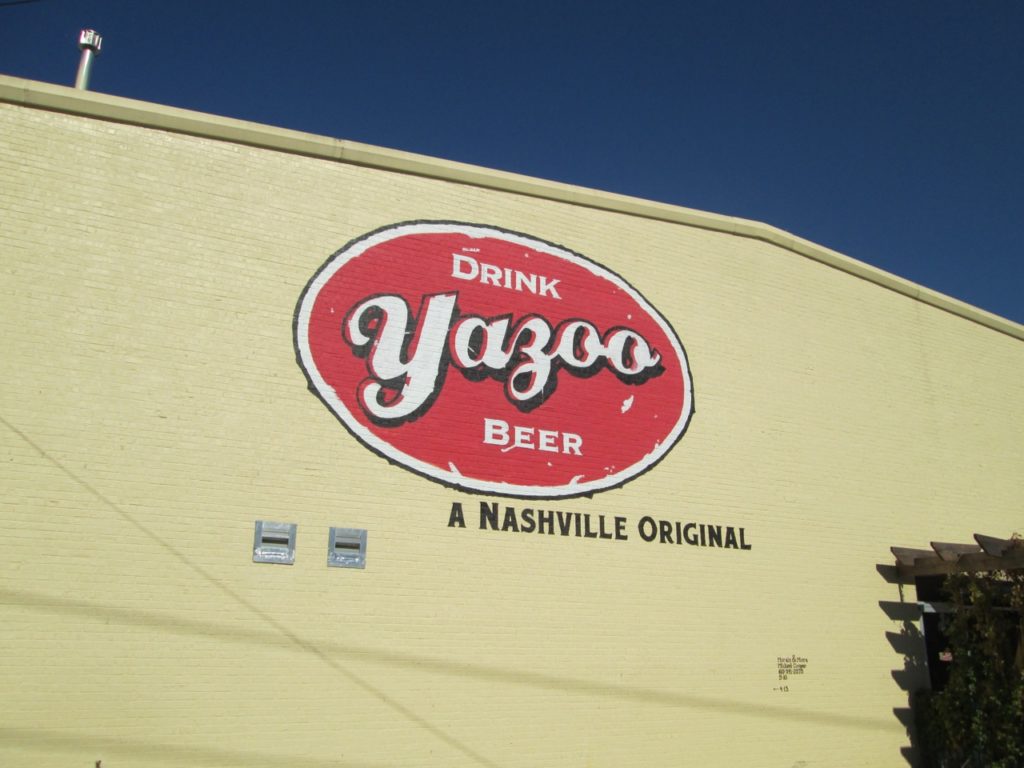 Yep. Just wandered past it. Nashville is a little smaller than you think.

If you really want to go to Yazoo, plan ahead — they’re only open for tastings and such a couple days a week. But for the most part, places you go will have at least one if not two or three different kinds of Yazoo available. My recommendation is to find all the Dos Perros you can and drink as much of it as possible, whenever possible. 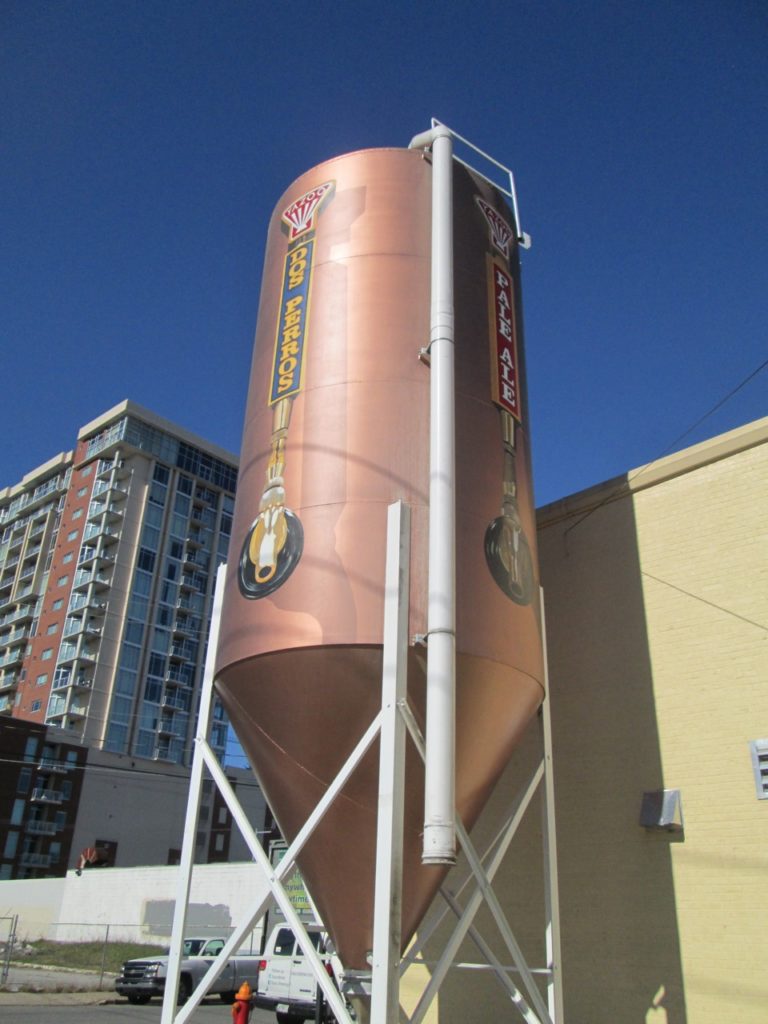 The pale ale is fine, and the hefe is pretty standard, but that Dos Perros — it’s gonna come in handy. It’s a fully flavorful brown ale with a nice amount of complexity and a hefty enough body to let you know that you’re drinking something, but it clocks in at just under 5% ABV — the very definition of “sessionable.” And Nashville is nothing if not a session town. (Musician joke!)

There will be a lot of places where your options are “swill” and “Dos Perros.” You should pick the Dos Perros. However, don’t do it every time. This leads me to…

Okay, so when I say “like it” I mean “appreciate it in a different way than just watching TV on a Tuesday and drinking four High Lifes.”

What I mean is, going to Nashville and wandering from honky tonk to honky tonk on Broadway on a Saturday night is basically the American version of Oktoberfest. It’s beer and crowds and loud music and beer and relative abandon and believe me, no one is drinking wine. Folks are drinking Bud Light, and High Life, and Coors Light (heavens praise the bars like Legend’s Corner for selling Banquet) and it’s kinda just what you do.

More From GDB:  Where To Drink Near Wrigley Field

Basically, if it’s 1:30am, and you’re on the 3rd-floor balcony of Honky Tonk Central (THIS IS A REAL NAME OF A REAL PLACE) watching bachelorette party after bachelorette party wander by and there are three people hovering next to you sucking down cigarettes because it’s actually legal to do that there, and you DON’T have at least a Silver Bullet in at least one of your hands, things just ain’t gonna seem right. 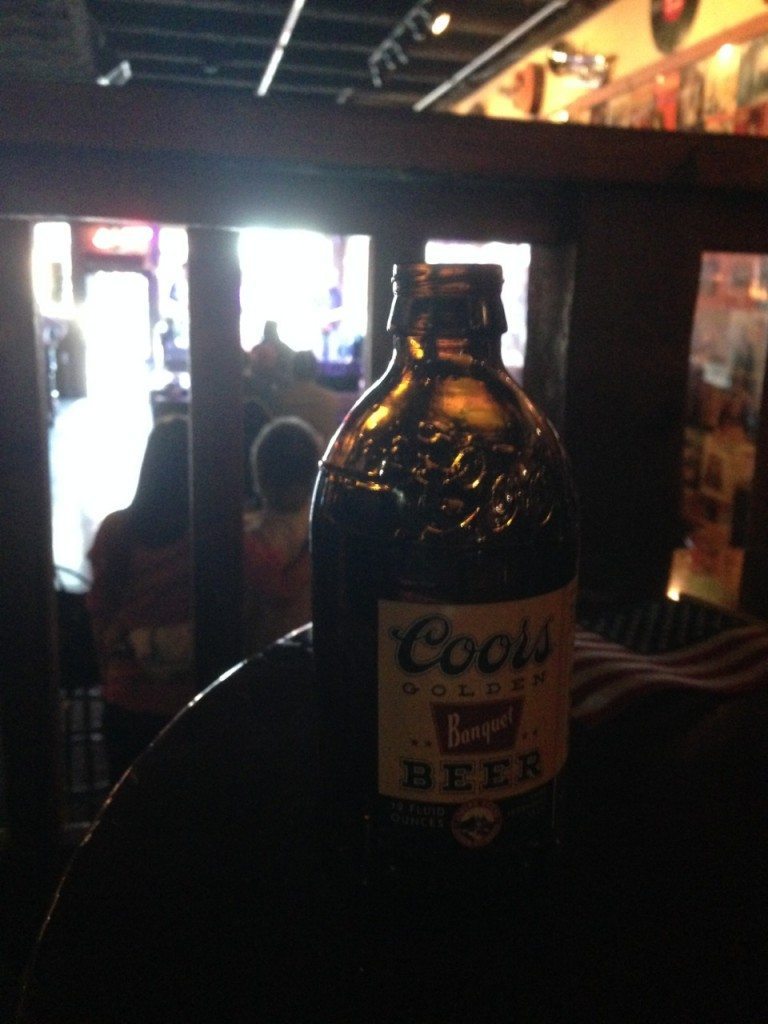 It’s an experience that everyone should embark upon at least once in their lives, and I now understand why folks call it “NashVegas” because Vegas is another thing every American needs to do at least once. Ditch the craft-beer snobbery (which you shouldn’t have anyway; lighten up, Francis) and drink a goddamn macrobrewed beer and yell a request at the band. It just feels right there, you know? I drank a whole mess of High Life, Silver Bullet and even a half a Bud Light Lime (don’t ask about this one) and I feel just fine about it.

3) Learn to Accept — No, Appreciate — the Fireball

In case you haven’t heard, Fireball Whiskey (or as I call it, Fireball “whiskey”) is pretty much all the rage in Nashville and other points south. Hell, HuffPo even called it “the most popular liquor brand you’ve never heard of” back in July.  What is it? If you ever drank Hot Damn or Goldschlager in your first few years of undergrad…well, it’s better than that but you’re starting to get the right idea. It’s actually the same stuff as Dr. McGillicuddy’s something something something; I don’t remember because that’s how powerful branding and marketing is. Now it’s just… Fireball.

It’s also ubiquitous — Fireball machines at bars are lined up next to Jagermeister machines, which should also give you an indication of how this particular drink works. It should run you no more than $4-$5 a shot, it will be served in a little plastic glass so you can’t throw it and hit someone in the head when you get all redneck crazy, and it tastes like an Atomic Fireball. (Get it?)

I fought against the idea of Fireball for a while, and now I’ve made my peace with it. It is a product of its location, and I don’t expect it to catch on up here where it’s cold for 7 months out of the year, but when you’re squished into a tiny bar in a Southern city and it’s hot and humid outside, what else are you gonna drink? Might as well make your insides glow aflame a little bit.

Note: When you’re in a bar and they play that Florida Georgia Line song that references Fireball whiskey in the chorus (and you will hear it), there could be no more appropriate time to do a shot from that little plastic glass while yelling “woo-hoo” like a 19-year-old sailor on shore leave in Thailand.

More From GDB:  Drinking Across the Frozen Tundra: A Chicagoans Guide to Green Bay, Wisconsin

4)  A Brief Aside To Discuss the Food

We went to: Hattie B’s for hot chicken. Arnold’s for traditional meat-and-three (get the roast beef and learn a new appreciation for the majesty of salt), Broadway Brewhouse for football-watching snacking, Patterson House mostly cocktails but also for sustenance (see below), a place called Whiskey Kitchen because it was on the way to a Drive-By Truckers show, Husk for a super-fancy Southern dinner and Pancake Pantry for a final breakfast. 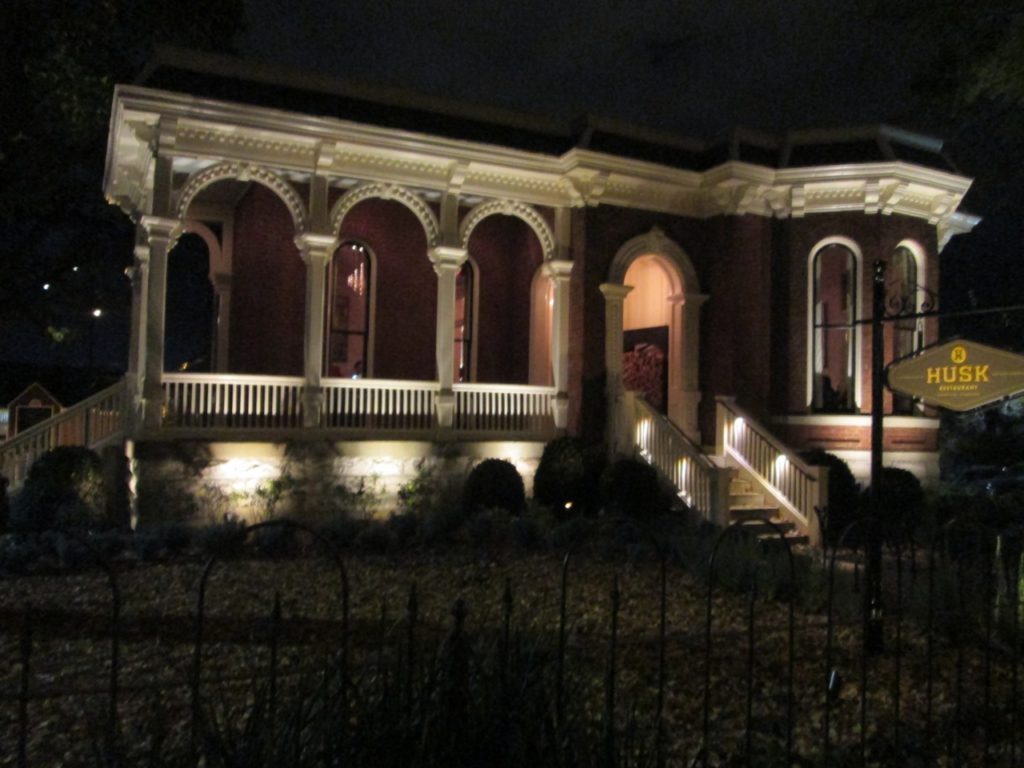 This is Husk Nashville, which may be the prettiest damn restaurant I’ve ever been to. Stately manor, indeed.

Because this is a guide about drinking in Nashville, I feel obligated to mention that there was no booze at Arnolds or Pancake Pantry.

5) Sip Cocktails at Patterson House And Feel At Home

As Nashville’s CityPaper put it:

A Nashville entrepreneur since his teen years, [owner] Goldberg hit on The Patterson House idea during a trip to Chicago more than a year ago. In the Windy City, he discovered The Violet Hour. [snip]

“It was an amazing experience,” Goldberg recalled…”The more I learned the more I became interested and the more I wanted to bring this to Nashville.”

Chicagoans will recognize the exterior with no posted name or sign. The waiting space and the curtains that are drawn back to reveal the bar. The rules posted on the wall. Even some of the drinks are the same. None of this is a bad thing. In fact, it wasn’t a cocktail but a food dish that brought us back twice in two days — you’ll have to believe me when I say it’s no hyperbole that the chicharonnes are better than the ones at Publican. I’ll await your cries of “blasphemer” and “how dare you” and “take it back you heathen” over here on Twitter.

More than anything, for us, it was a bit of a grounding experience. Even though we were a few hundred miles from home and had already spent a few days over on the east coast before coming to town, sitting at the bar and bullshitting with the mixologist/bartender/I don’t know what they want to be called was a little touch of fancy-pancy home when we needed it. You’ll appreciate it too.

When we visited Cleveland, I was surprised to find that 21st Amendment beers were prominently featured there. Similarly, Schlafly has a presence in Nashville which you should take advantage of if at all possible.

It’s a little weird, but just run with it. You’ll probably be drinking a Dos Perros when you see that they have Schlafly available, at which point you’ll order a Schlafly, and afterwards probably go back to a Dos Perros.

7) So, The Bars: Where Should You Drink?

Basically, we didn’t wander into a single bar where we felt out of place. From the Lower Broadway joints (including some I may or may not be able to fully recall) to some beer bars in Midtown, to cocktail joints to fancier places, everything felt as comfortable as any of my favorite places in Chicago, if not moreso.

A) I had a hell of a good time at all my destinations, so if a lot of folks think that all these other places are better means I have a lot of work to do when we go back to Nashville.

B) There are a whole hell of a lot of great places to drink in Nashville. A lot of them look like this which make for pretty awesome pictures: 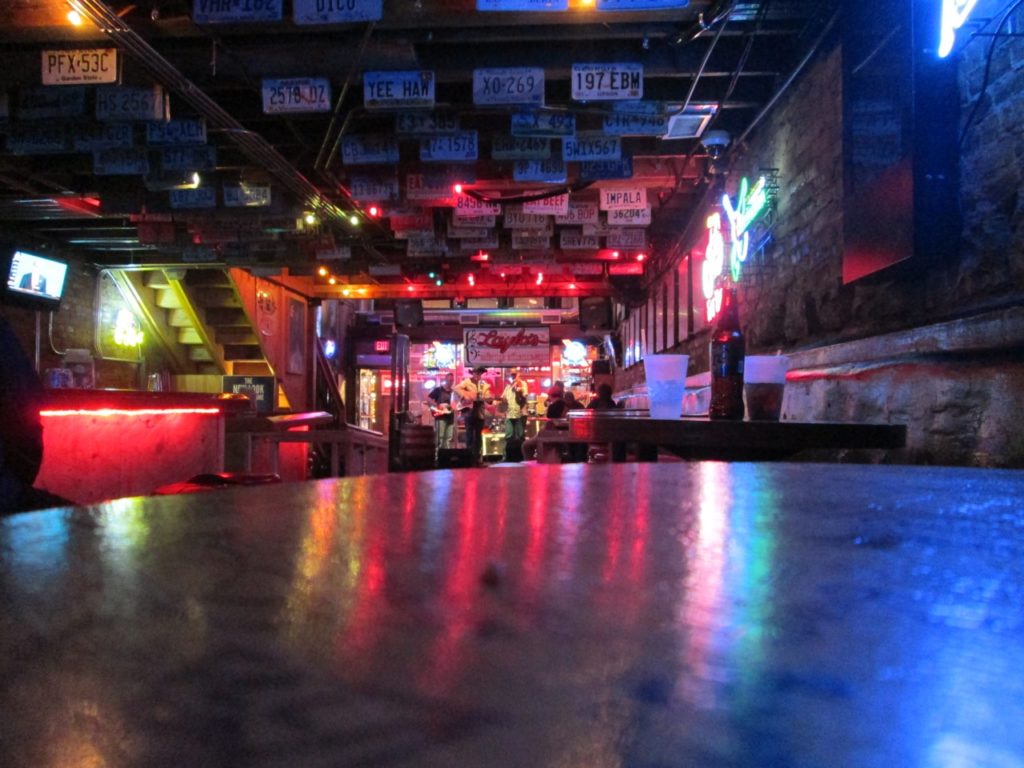 8) A Summary, Or Other Things I Haven’t Mentioned Yet And Some Stuff I Have Mentioned

Drink Yazoo. Drink Jackalope. Drink Fat Bottom. Drink cocktails, and Fireball, and cocktails that have Fireball in them if you can find them. Listen to a lot of music. Listen to music in a lot of different places. Appreciate that people are playing in bars for free at 3pm on a Monday because they have a dream and some talent and tip them appropriately, you lousy bastard.

Wander a lot; it’s a city that’s okay for walking if you stick to the downtown/Midtown area. Get a bunch of beers at Broadway Brewhouse. Get talked into a Bushwacker, which is basically a boozy milkshake, at Broadway Brewhouse. Look around and realize that even though you can smoke in a lot of places in Tennessee, many people choose not to, which is kinda unbelieveable.

Marvel at the fact that there are a half-dozen breweries on tap at a bunch of bars that you don’t even recognize. Appreciate the fact that even though you may think you know a lot about beer, there’s still so much more to learn. Drink new stuff just because it’s new.

Don’t go if you don’t like country music and bluegrass, because you’re just asking for a world of hurt.

Actually, go anyways. I dare you not to have a good time.

3 Nights in Nashville: A Chicagoan’s Guide to Drinking in Music City was last modified: August 31st, 2021 by Karl