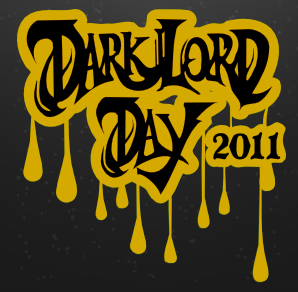 When I first heard about Dark Lord Day in probably 2006 or so, it was a time far in advance of my craft beer epiphanies, a time when I was barely aware of things like porters and IPA’s, let alone something like a Russian Imperial Stout.  Indeed, Dark Lord was the only example of the style I’d ever heard of at all, and making it available only on one single day during the year was a fun way of getting a little press for a crazy beer style and a little exposure for this microbrewery called Three Floyds, which was apparently just over the Illinois border from me in Muenster, Indiana.  I liked the idea.  It seemed like a good time.

Now, I should probably preface this whole piece by saying this:  I’ve never been to a Dark Lord Day.  So take all the following words with that particularly large grain of salt.  But I prefer to think that it means I can look at the situation with a bit of distance.  Further, I don’t like crowds, I especially don’t like completely wasted crowds (you can generally find me hiding out in some lonely undisclosed location every St. Pats and New Years) and I don’t particularly enjoy being made to jump through hoops to get things.  That’s who I am as a person, and as such I’m the first to admit that maybe Dark Lord Day has never been for me.  And considering we didn’t particularly love our foray into Dark Lord the beer, maybe all of this is for the best.

But allow me to continue.

Over the years I’ve seen my attitude towards Dark Lord Day run the gamut from enthusiasm for the idea, to mild bemusement that so many people would line up for a couple of beers.  As I’ve watched the reviews and reports and info come out from the last three years, and simultaneously watched the rest of the world catch up to the style of beer that Dark Lord used to have a minor monopoly on, my opinion is thus:  Dark Lord Day’s time has come and gone.

In a way, it’s because of its own success that Dark Lord Day should be over and done.  We now live in a world where 4-packs of Old Rasputin can be found in many corner stores, let alone on the shelves of numerous beer and liquor stores across the country.  The style itself isn’t as rare as it used to be, and for that we largely have Three Floyds to thank for that (and thank them I definitely do).  Stone’s Russian Imperial is heralded, Goose Island’s imperial stouts are known far and wide.  Other brewers like Founders and the aforementioned North Coast come to mind as well and numerous other brewers are now producing gargantuan stouts because it’s worth it both to embrace the style and because they know people will buy it.  If Dark Lord Day proved that people who know beer really want a huge RIS, then I thank DLD for what can only be called a sea change in the world of American craft beer.

That change only serves to reinforce my idea that Dark Lord Day is now more about marketing first and community second, over actual substance.  The past couple DLD’s have all been pretty universally panned as overcrowded, poorly run and organized, understaffed – and nevertheless, it must be said, fun for many.  Not so fun for many as well.  All in pursuit of a beer that in no way needs to continue to be held at arm’s length from consumers.  That it’s Three Floyd’s choice to dangle the carrot of Dark Lord in front of us is perfectly fine, but I don’t think we need to continue to deal with grasping for it.

Of course, I expect to be told that I’m completely wrong about my anti-DLD stance.  That the community of beer lovers and homebrew fans make it the place to be, that Dark Lord is the excuse for all these folks to get together and it’s not about the beer, really.  That DLD is actually the sideshow, and the event is the main draw.  It’s “circuses” over “bread,” as it were.

To which I would argue, then why do we need Dark Lord at all?  If we need a spring festival of craft beer, then let’s have one – but let’s not continue to pretend that Dark Lord is still the be-all, end-all of beers and that it’s what really draws the crowds.  We can all keep having the fun that’s been had in the past, but potentially with a little more organization, and a few less hurt feelings over poor beer distribution and endless lines.  Put Dark Lord on the shelves for $20 a bomber and ditch the self-induced scarcity.  I’m all for getting together and drinking beer – but we don’t need to do it like this.

And lest I sound like someone saying “this food sucks, and the portions are small,” the dialing back of this years event only further proves to make my case.  If you liked standing in line on a Saturday, you’ll still be able to do so – but as Three Floyds chooses to enforce the ticketholder-only status of this years event, you’ll be hanging out there without the general madness of years past around you.  (Which admittedly has an appeal for many.)  If that’s what you’re expecting this year to round out your experience, I wouldn’t count on it.  This year could be nothing more than driving far, standing a while, getting a couple of beers and going home.  Is all that worth it?

It’s undeniable that Dark Lord Day has been an important event in the past.  I don’t want to seem ungrateful for what a fantastic brewery like Three Floyds has brought to the world.  But as we have more and more options for monster stouts created by fantastic breweries without the hoop-jumping required to find it, I believe the sun is setting on the need for DLD to continue.  Some traditions carry on for decades, and others come to a natural end when it seems right.  Bells Batch 10k is the last in that brewing tradition, for example.  If Dark Lord is truly that great, then put it on the shelves and open it up to the rigors of the spotlight that every other beer gets.