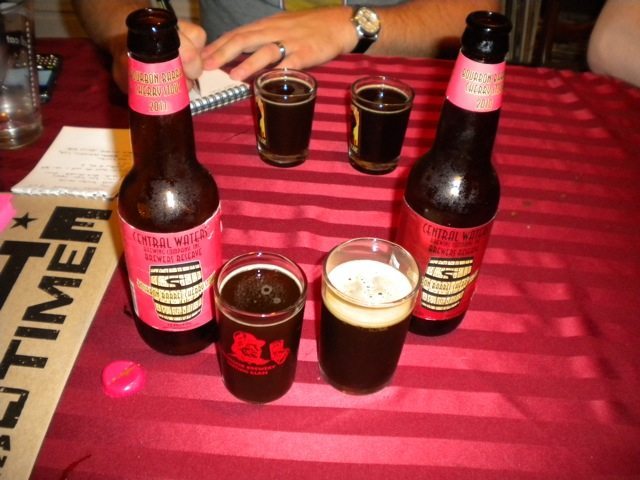 KARL: …or “CWBBACS” for short.I will refer you back to our tasting of Bell’s Bourbon Barrel Cherry Stout for my initial (extremely favorable) impressions on cherry beers and how well they can work with bourbon-barrel aging.

To provide a little added reference about my preferences/appreciations for cherry/whiskey flavors, I should add here that when I chewed tobacco (a habit which lasted about 6 weeks total, because it’s effing disgusting), I chewed cherry flavored Skoal that stayed moist with the addition of about a quarter-shot of Jim Beam to the tin.  I only include this to add that even when my beer palate skewed from Busch to Old Style, cherry and whiskey was still a known flavor pairing that was appreciated by my brain.

Now that I’ve completely grossed you out with my personal backstory, let’s talk about Central Waters.

Between the two years of this brew, there’s a very significant difference.  I like it when aged beers are dramatically dissimilar, because it’s fun to see just what a few extra months can do, but unfortunately it usually means one of those “different” beers sucks.  I don’t want to say that the ‘10 sucked, but…well, it wasn’t great.

Let’s start with the good news – the fresh CW BBA CS was pretty good.  With a bright cherry flavor and a surprisingly light body for a stout, this beer wasn’t a chore to get through like many other cherry stouts can be.  In fact, this beer was almost like a watered-down sour, probably owing to the off-smelling funky head.  This may not sound like a resounding endorsement, and be sure that this isn’t even in the same league as the Bells BBACS.

Give it a second, let it open up and breathe a little, and you should find that it tastes similar to Barq’s Red Creme Soda, which I have always loved.  For that, it’s worth it.  Notice that nowhere in the above paragraph do I describe the bourbon flavor.  There’s a very good reason for that.  There was none.

As for the ‘10, it had a promising start.  It begins with a strong wave of flavor, complex and hefty, again almost sour.  A nasty note on the back end of the taste erased my initial good feelings, and the following odd/off funk of the rest of the tasting served to reinforce the bad ones.  Open this one up, and it just goes flat.  A blah beer.  Again, was there bourbon in there?  If so, I missed it. 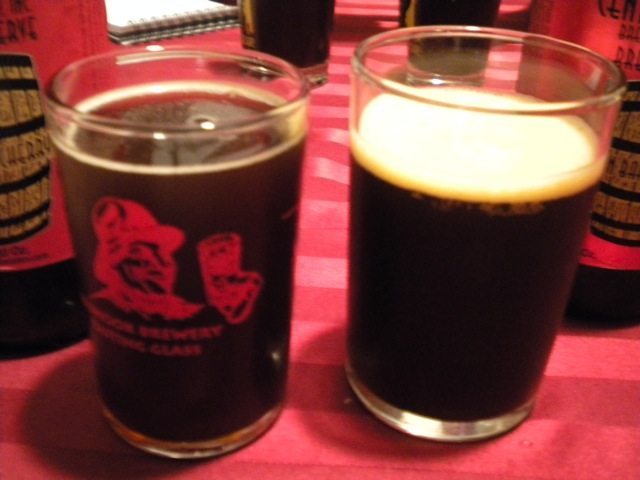 ANDREW: As if we couldn’t throw enough acronyms your way (kind of makes me feel like we work for the federal government or something) we move on to the Central Waters Bourbon Barrel Aged Cherry Stout or CW BBA CS, for short. I never dove into cherry flavored Skol like Karl, but I do have a deep appreciation for cherry…anything – Jolly Ranchers, pie, preserves and so on.

Now, you might be thinking, “Guys, haven’t you learned your lesson trying aged bourbon barrel cherry
stouts?” While you raise a good point, just because we didn’t like the age on the Bells beer doesn’t mean we won’t like it with another attempt.

(But you’re right. Maybe we should have learned.)

The fresh stole the show with some sour cherries, chocolate and coffee with a nice bourbon kick on the
back end. The aged was…disappointing. It ended up being a bit funky and I wrote that while it tasted
better than it smelled, it was still a big ole meh. 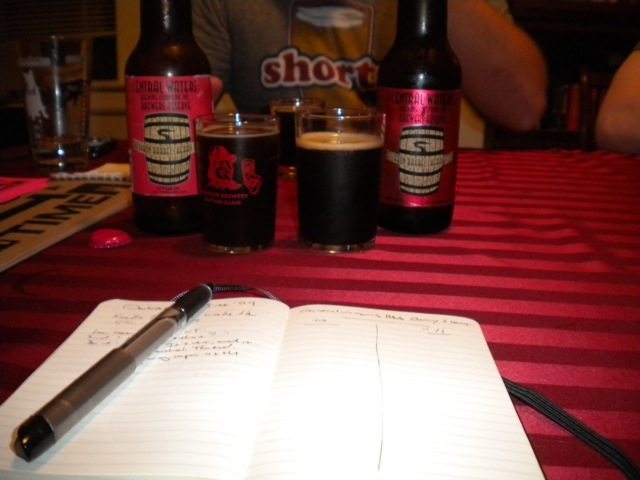 RYAN: Long being a fan of anything aged in any kind of barrel I find myself disappointed to admit that I was disappointed by this beer; both beers actually. Maybe my palate has surpassed its level of enjoyment of booze soaked beers and has moved on to simpler, and sometimes more flavorful, kolsch’s or pilsner’s.

Wait, that certainly can’t be the case here. The bourbon in this bourbon barrel aged beer was so subtle it was borderline non-existent. Plus, I still loooove me a good barrel aged…anything.

So if there wasn’t much bourbon than what was there? Well, I picked up on many of the same flavors Karl and Andrew did; loads of tart, sharp cherries in the 2010 taster and the cherry cola-like dominance of the 2011. I think I picked up a bit of bourbon on the finish of the 2010 and a touch somewhere in the middle of the 2011 but apparently it wasn’t worth noting where.