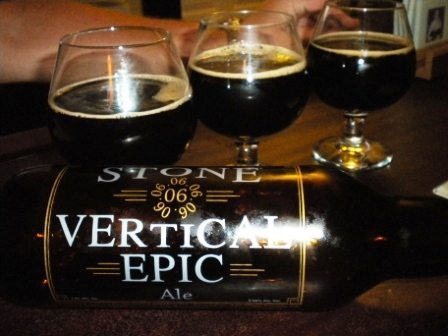 “As with any good epic, herein lies the promise of larger-than-life experiences, heroics, and twists & turns as the adventure unfolds.  This bottle conditioned ale is chapter 5, and is specifically designed to be aged until sometime after December 12th, 2012.  Provided you can wait that long.”

Karl: Okay, so we’ve occasionally gone a little Stone-happy here at Guys Drinking Beer headquarters (aka Ryan’s living room). Just take a peek at the size of that Stone tag to the left over there. It’s huge. But longtime listeners, first time callers know that we started this whole thing a few months ago when Stone came to town so I think we were a little justified. That said, when Ryan breaks out a bottle of anything of theirs nowadays I kinda hesitate for a second. Except for the Vertical Epic series. Hoo-boy.

Considering that they made these to last for just-about-ever and Ryan has been holding off on this one for years, it’s worth diving into – since the next time we get our mitts on one of these it’s going to be another few years from now. So let’s do it.

This Belgian Strong Dark Ale is a mouthful in name alone, and the followthrough from the beer is equivalent. In the bottle the scent is probably best described as “earthy” – even on the nose there’s richness, there’s depth, there’s a certain sense of soil or moss or something else that’s dark and hefty and possibly full of allergens. Like nature.

It pours as dark as you would imagine off of the nose, with a light khaki head and just a touch of light lacing up the glass. The aroma develops raisins and dates as it breathes and gets a little fruity – even somewhat fruitcake-esque. The taste itself is intense, complex, and extremely satisfying. Starts lightly with coffee and chocolate, and give it just about 15 seconds and it develops a nice nutty flavor to round out the experience. Surprisingly, even though the ABV is about 8.6% it’s very restrained and not overly sharp with alcohol. A very well balanced, pleasurable drink that has no doubt mellowed over the years but still has a lot to offer – and will no doubt get even richer by the next time we crack one open.

Ryan: I really wanted to hold off until Stone’s VE 12.12.12 was released to crack this one open. Really, I did. But it kept calling me from inside the cellar to sample it at the four year mark.  So, we did.

The VE 06 pours dark as night with just a bit of tan head. So far it’s everything I expected.

The nose is what caught me off guard.  It’s very…complex; toasted malts, a bit of funk, some wet grass, dark chocolate and chocolate covered cherries.  Tons going on here.

Big time flavor with this beer too.  Coffee to start, which fades and makes way for some dark cherries, fruit cake, and a bit of tart funk.  The beer finishes solid with some dark chocolate.

This beer has held up very well and I am eager to crack open my last bottle when we do a mini epic, 06 -12, in a few years.

Andrew: We here at Guys Drinking Beer love Stone (as do most of you), so when Ryan said we had an 06.06.06 waiting for us I was downright giddy. It poured with a very light head that dissipated very quickly with lots of malty earthiness in the nose.

More From GDB:  Sharing is Caring: A Popup Vertical of Stone Beers at The Green Lady

A fantastically smooth beer that starts out with hints of chocolate and coffee, moving to a fruity spiciness and finishing with a nutty oakiness on the back-end. This beer was all over the place, and I liked it.