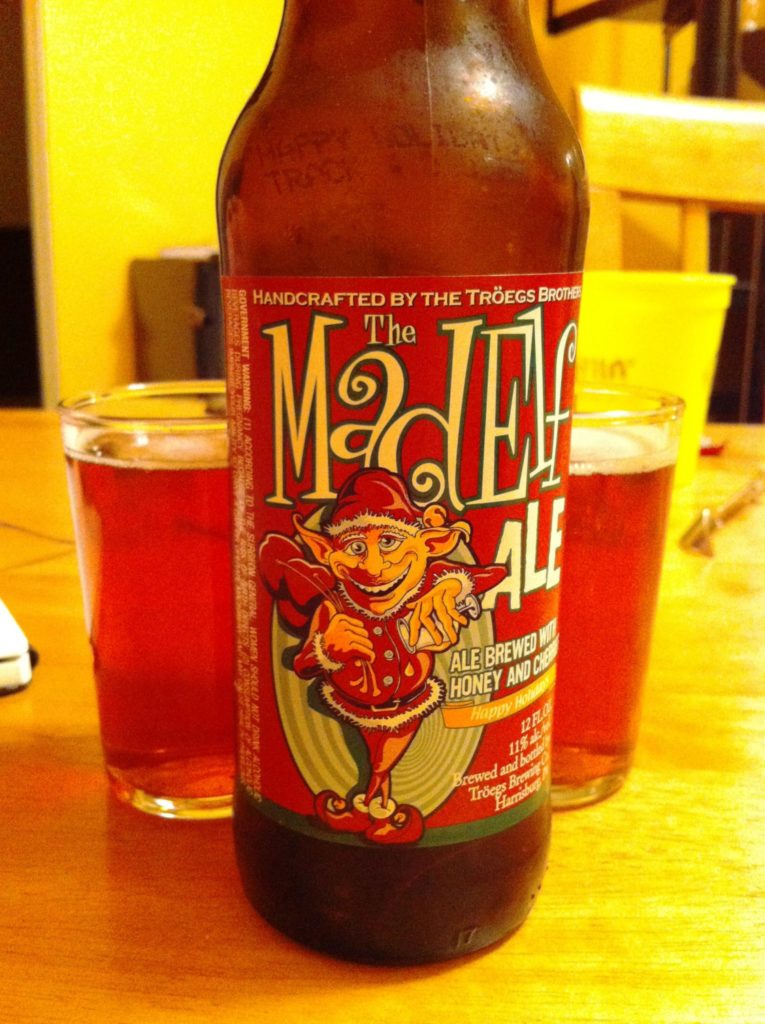 “The Mad Elf, a cheerful creation to warm your heart and enlighten your tongue. The combination of Cherries, Honey, and Chocolate Malts delivers gentle fruits and subtle spices. Fermented and aged with a unique yeast, this ruby-red beer has significant warming strength that underlies the pleasant character of this intriguing yet delicious Ale. The Mad Elf, a jolly and delicious beer for the Holidays.”


(Editors Note: This beer was purchased in December of 2009.  It was sampled in July of 2010 and December of 2010.  Below are the tasting notes from the 6 month mark and the year mark of cellaring.)


Ryan: From the goofy, three-sheets-to-the-wind elf on the front to the unassuming copper in color pour to the light body and hints of fruit and cinnamon; there is nothing about this beer that screams Belgian Strong Dark Ale.  And that is what is downright scary about it.

This beer pours, as I noted above, an almost translucent copper in color.  There is very little head and no noticeable lacing to accompany this beer.  I know that a Belgian Strong Dark Ale doesn’t have to be dark but this pours more like a session beer than a double-digit ABV sipper.

The nose is full of fruit and cherries – almost like opening a box of Fruity Pebbles.   The sweetness and tartness of the cherries hit the palate first followed by a mellow, light honey flavor.  I also noted just a little bit of cinnamon on the back-end of the Mad Elf.

This beer was very light and easy drinking.  Frankly, I’d happily drink it during the summer months – or any time of year for that matter.  Oh, and the 11% ABV in this beer is absolutely, positively, without a doubt NOWHERE to be found.  Normally, I’d recommend taking it easy on this one or classifying it as a “sipper.”  But it’s not.  It goes down way too easy and tastes too damn good to be drank slowly.

Karl: While Troegs has decided that this too is a holiday release, it doesn’t resemble anything close to a traditional Christmas beer. In some instances across this series of beers, we see that isn’t always a good thing. In this case, however, it’s perfectly fine. It’s not what anyone would expect but the Mad Elf has its own place in the holiday drinking process and fits right into a niche you probably didn’t know even existed.

The Mad Elf, brewed with honey and cherries, obviously isn’t going to be fruitcake in a bottle. It pours without a head to it, with a nice reddish-orange hue and a nice clear body, and no sediment. Whereas most other cherry-based beers, like Founders’ Cerise or even a Bells Cherry Stout, counts on the tartness of the cherry to cut through and add a different dimension to the brew, the honey in the Mad Elf melds with the sweetness of the cherry, cuts down on that sharpness that’s on top of many cherry brews, and combines to create a light sweetness.

For some reason, I always expect honey to add a certain heaviness despite repeated evidence through mead drinking and other honey-brewing experiences to the contrary. I don’t know why; that’s just how my brain works. Again, a fermented honey acts here as a lightener and the Mad Elf is crisp, bright and holy hell this stuff is 11% alcohol? Where in Santa’s name do they put all of it?

Remember when I said that the Schlafly Holiday Old Ale would probably be good alongside of dinner, but doesn’t stand out on its own? The Mad Elf’s niche is that it’s the beer you drink after that dinner. It’s got it’s very own holiday thing going on that would pair great with some gingersnap cookies or a cinnamon dessert or just on its own. Barring that, you could walk out your front door with a glass of it right now into 90 degrees with humidity and still find it just as refreshing. The label says holiday, but this is a beer for all occasions.

Andrew: The Mad Elf poured a light brown/amber color with decent head that dissipated quickly. Sweetness, citrus and cherries were right up front in the nose – couldn’t detect much booze at this point. At this point the cherries are dominating.
The taste largely aligned with the smell – dominating cherries with citrus fruits and a little cinnamon and perhaps some honey? It was a very light beer with great carbonation that comes in at a shocking 11% ABV – you really couldn’t have guessed that this comes in at 11% just by the taste or the smell. Goodness.

Karl: We had this during our Xmas in July series of beers and loved it then.  It was a bright and sweet punch of lightness and honey and cherry and awesomeness.  With a little more age on it, this beer is nowhere near as sweet, and the cherry flavor has died way back.  I mean, it’s still there right on the front, but it’s a duller flavor, maybe even a muddier flavor in comparison to the crispness that was still on this a few months ago.  It might even be darker in color, too.

This bottle of Mad Elf actually reminded me of cake.  A funfetti cake with white frosting, the kind of frosting that comes in the can and always has a little hint of fruit or tartness in there behind the overwhelming sweetness.  There are little pockets of big flavor in here, hidden amongst the age-induced relative darkness. Put it this way: It’s still good – but just a little less good.  Drink this fresh or at 6 months at the latest for the full Mad Elf Effect.

Andrew: Kind of a tremendous change from just 6 months ago – the beer poured with no head and was still a hazy copper with a hint of cherries and caramel in the nose. I could tell immediately upon my first taste that the cherries had really diminished and given way to the honey and caramel malts. What was little more than a blast of cherries 6 months ago really turned into a well-balanced beer. There was also a hint of spiciness that I’m not sure I picked up on during out last tasting.

The booze in this 11 percenter is still very well hidden – not much of an alcohol burn at all. I enjoyed the Mad Elf when we first tried it 6 months ago, but I like it even more now – maybe the 1 year mark is the sweet spot for this beer, just enough fruitiness but not too much as to overpower the beer.

Ryan: Well, it looks like I’m the equalizer on this one; Karl wasn’t impressed but Andrew was.  As for me, well, much of what I liked about this beer fresh and at the six month mark had faded; particularly the bright and vibrant cherry aromas and flavors. The nose on this beer has transitioned to less cherry and more candied sugar and honey while the taste was reduced to the equivalent of  dull, canned cherry pie filling.  That being said, the honey is now much more pronounced and a hint of toffee has entered the picture too.

Mad Elf also had some very lively carbonation that I didn’t expect to find in a beer that is one year old.  And the 11% ABV is still very well hidden.

This beer is starting to impart some of the flavors that I would expect to find in a Belgian Strong Dark Ale, namely the dark fruits and toffee.  That being said, the bursts of tart cherries is what made this beer unique.  I’d really like to see what happens to this after two years in the cellar but, alas, this was the last bottle.  If I were to guess the outcome, I’d like to think the dark fruits and sweet malts would come to the forefront even more with a bit more time in the cellar but there’s no guarantee that would happen.  Maybe Karl’s right, maybe this beer does peak at six months.