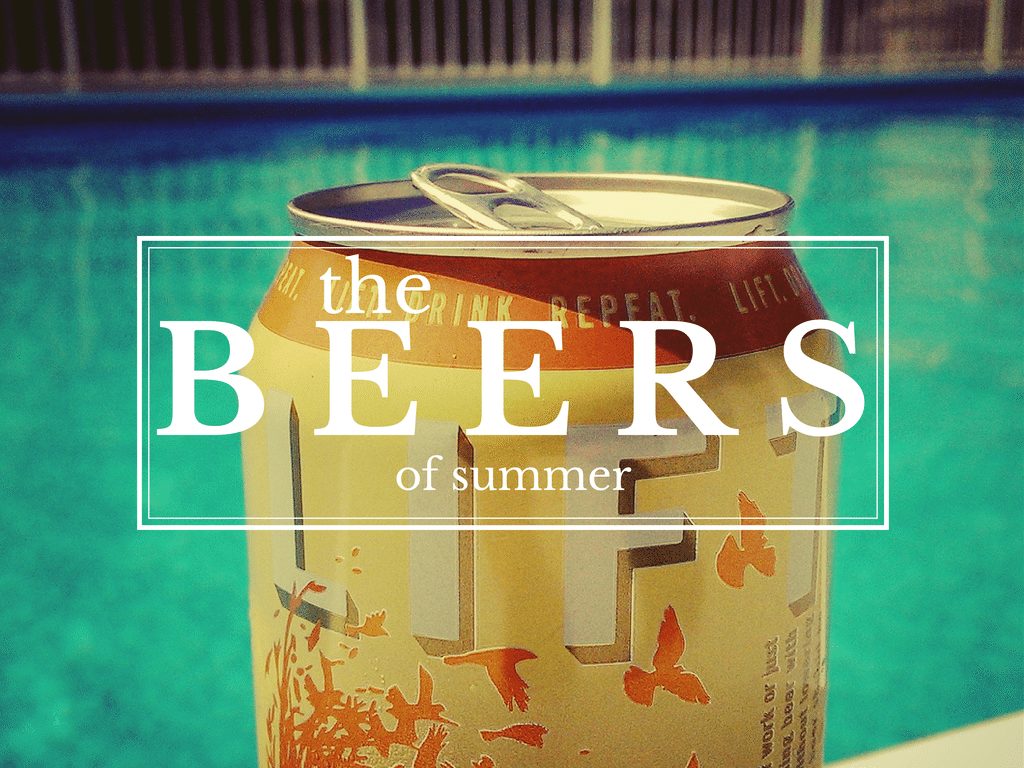 On this, the second-to-last day of the summer season, we say goodbye (officially if not in practice) to the beers we’ve enjoyed over the last three months or so. There have been a lot.

Behold, the GDB Beers of Summer 2014, aka What We Drank on Our Summer Vacation:

Karl: We live in a world where summer beer options are now nearly endless, and the beer market has never been in a better situation for long hours of lazy low ABV drinking. In fact, with the advent of the now-ubiquitous Session IPA, I dare say this has been the best summer for prolonged craft beer intake ever. And yet, my Summer Beer of 2014 was…Half Acre’s Daisy Cutter.

Yep, Daisy Cutter. The beer that Half Acre can’t seem to make enough of – when I took their tour this summer, they told us that 85% of their capacity is dedicated to the stuff. For a long time, I had basically forgotten about this beer along with Gossamer in favor of the new shiny fancy fresh offerings. But after long last, my palate came around and screamed for this one. Why? Who knows. Maybe its’ a subconscious reaction to the overwhelming amount of new options in Chicago. IE: “If I can’t try all of them, then forget it — I’ll go back to one of the classics and be happy with it.”

But that’s obviously not all of it. It’s honestly one of the best pale ales in the nation, a standard-bearer for Chicago beer, and if there were one beer to go national out of everything that’s been made in the last 8 years or so, it’d be Daisy Cutter. It’s bitter and complex enough for the hop dorks, easy-drinking and thirst quenching enough to enjoy without feeling obligated to over-think it, and even approachable enough for non-craft types. This beer walks right up to the edge of being too hoppy but doesn’t walk over, and isn’t malted to hell to make you feel like you weigh another pound after drinking one can.

Daisy Cutter is one of the best there is, and if you haven’t had one because you’ve been chasing firkins of crazy shit and limited-release bombers, go to a grocery store and pick up a four-pack. You’ll thank me, I promise you.

Honorable Mention: I drank my fair share of Revolution Brewing’s Rosa, as I do each year since its debut, but it’s really just become a bridge to get past until A Little Crazy comes back. Why can’t that be a summer beer too? Another awesome happy place for me: tallboy cans of Bell’s Two Hearted on a Traverse City beach on the 4th of July watching the Blue Angels practice. America!

Also, since I deemed this season the Summer of Radler, I have to heap a little praise on Dryhop’s Sharkler and Penrose’s grapefruity brew this year.

Ryan: Well damn. My summer beer of 2014 was Half Acre Daisy Cutter too. But since Karl heaped enough praise on that beer I’ll happily move on to another — Revolution Brewing Anti-Hero IPA.

The nose may not overpower — leveling out with equal parts malty sweetness and citrus-y hops — but the flavor profile certainly does. Sticky, resin-y hops sting the palate up front while a honey sweetness provides balance mid-sip. The finish is dry and hefty on the grapefruit pith and tangerines. This beer is heavy as it flows across the tongue but oddly remains easy drinking. And while it clocks in at 6.5% ABV I found it effortless to knock back in front of the grill on a Sunday afternoon or a lazy weeknight.

Honorable Mention: I’m thisclose to saying it’s Madtree Brewing Lift (pictured above) which I snagged on a weekend trip to Cincinnati but I think I am going to give the nod to Blackrocks Grand Rabbits. This is a beer I recently encouraged you to Cross the Border For into Michigan, and for good reason.

The dry hopped cream ale gives off a nose full of buttery biscuits drizzled in honey and fresh peeled tangerines — all amid grassy hops. On the palate, Grand Rabbits is bready and biscuity with touches of honey and caramel. The hops kick in mid sip with lemon zest and splashes of grapefruit.

It’s a year-round offering, but the creamy body and pleasant hoppiness made it a great summer sipper. Although I reserve the right to grab another six-pack when we get that one week in October where it gets unseasonably warm. C’mon, we all know it’s going to happen.

Ben: There’s no doubt that this was a summer of killer beers, but when I was pushed into a corner to highlight my favorite, Hop Syndrome, the hopped-up American Pale Lager from Epic Brewing was, hands-down, my summer jam.

In the nose, you get the beautiful minerality of pils malt along with a pleasant, herbal hop aroma.  Tucked in back is that characteristic American lager yeast and a lingering whiff of tart candy.  In the mouth, again, a hint of minerality is very much present along with some smooth crackery notes.  Fresh, green hop bitterness is present and reminds you that this ain’t your run-of-the-mill pilsner. The balance in this beer is key; it doesn’t smoke you out with hops, yet the hop presence is there from the beginning to the end.  Top all of this off with the fact that it comes in 6-pack cans and you got yourself the epitome of a summer beer.

Honorable Mention: A close runner-up is Anderson Valley’s The Kimmie, The Yink and The Holy Gose.  This stuff was massively addictive.  Tart like a Berliner Weisse, but with the characteristic salinity of a Gose, I was taking down cans of this for most of July.

Steve: My favorite lunch spot downtown, Local 22, became a place where I spent way too many lunch hours the day they tapped Ten Ninety’s Jaggery Tripel. And I wound up scooping up so many bombers of it that it was unquestionably the beer I spent the most time with this summer.

Tripels have always been a favorite, but instead of traditional Belgian sugars, this one relies on jaggery palm sugar that’s often found in traditional Indian dishes. There’s all the sweet and funk you’d expect from a tripel, but the use of jaggery sugar brings just enough of a difference that there’s really not much else like it.

Honorable Mention: Drinking Deschutes Fresh Squeezed IPA in early summer completely changed my beer drinking habits. It was included in a flight the Mrs. ordered at Tribes Alehouse in Tinley Park when she declared “you may like this one.” I was never much of an IPA guy – until that moment. It’s seriously that good. The hops just burst out of this one with an incredible citrus balance and even a kick of spiciness. There’s just nothing to not like about this – and the fact that it pairs well with the sun and a pool floatie meant it sure was a close second for my beer of summer.