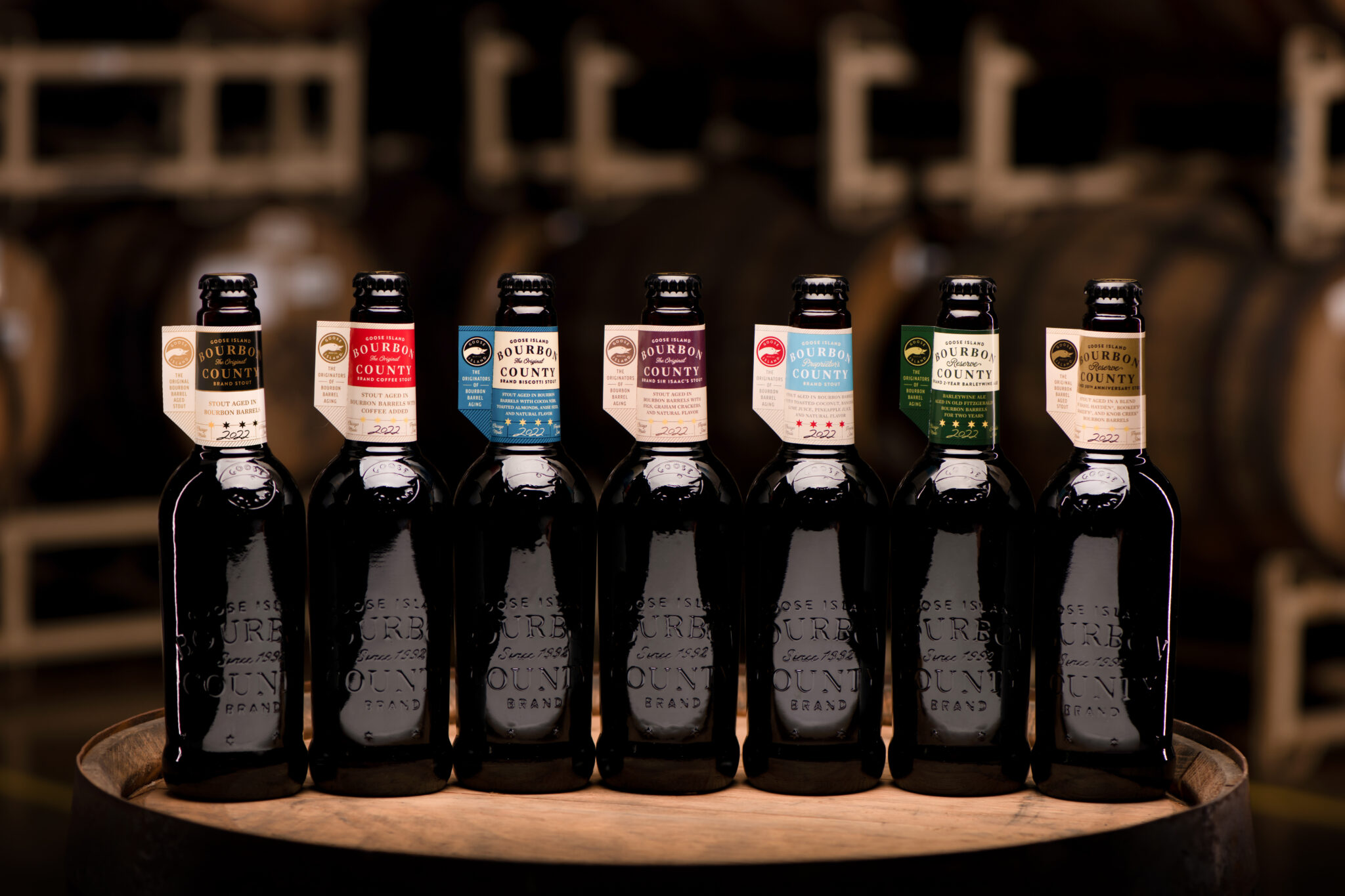 After years of barrel-heavy options, we’re back to mostly adding adjuncts

Goose Island just announced this year’s list of 2022 Bourbon County variants for release on Black Friday. Unlike past years, which been heavier on barrel experiments like Blanton’s, Old Fitzgerald and Elijah Craig double barrel variants, this year’s list only has a couple of those outside of the standard OG BCBS.

The majority of the lineup this year adds extra ingredients to the beers: four adjunct options compared to two barrel adjuncts and the OG version. We finally get the return of coffee (yay!) and some curious experiments with pineapple, lime, fig and almond. Even if there isn’t an immediate “OMG I gotta try that” on this list, at least things will be interesting.

Get familiar with the last few years via our previous coverage, and then check out this year’s list of 2022 Bourbon County Variants:

A few notes about this year’s variants:

Original: While the OG is, as ever, the OG, Goose has recommitted to this year being the 30th anniversary of Bourbon County’s creation. This comes in spite of the 2016 Tribune story casting doubt on that date, so I’m hoping Goose can come out with some receipts on this finally. Until someone shows me a document, this insistence on 1992 being the OG birthday strikes me as a decision to just be stubborn.

Two-Year Barleywine Reserve: This year’s Barleywine is the first since 2018, following experiments with Wheatwine in ’19-20 and taking last year off. It’s coming back in a big way in ’22, though, having spent time resting in 14-year, 16-year and 17-year-old barrels of Old Fitzgerald’s Bottled-In-Bond Decanter Series. Even if there aren’t a ton of barrel-focused variants this year, this is a big swing and a nice return for Barleywine.

30th Anniversary: Since Jim Beam launched their Small Batch Bourbon Collection three decades ago (which I bet they can prove), Goose is taking some of those barrels to age this 30th Anniversary Reserve Stout “to pay homage to the serendipitous union between Gregory Hall and Booker Noe that then led to subsequent years, variants, and traditions,” per the brewery. Sleeper hit or just a sleeper? TBD.

BCS Biscotti: “For the first time,” Senior Innovation Manager Mike Siegel is quoted as saying, “concepts for variants were created by people outside of the operations side of the brewery … that usually don’t get involved with creating beer, but won us over with their great ideas.” For this beer, credit goes to Jill Cerone, People Manager at Goose Island, who was inspired by the ’20 BCS Spumoni. This BCS offers “notes of anise, marzipan, cocoa, and buttered toffee.” Goose loves to show off the crazy ingredients they can source, making the lack of any specifics here notable. Will this taste overly artificial, or will we learn about Marzipan Mountain at the tasting? Hoping for the latter.

More From GDB:  Why Does Craft Beer Suddenly Seem to Have a Problem With Women?

BCS Coffee: Come on, if you’re not excited about the first BCS coffee since 2017, you clearly don’t know what you’ve been missing. Historically some of the greatest overall BCS variants throughout the years, this one comes with coffee from Intelligencia (no surprise here). This year’s specific roast is called Turihamwe, which means “together” in Burundi. Per Goose, it’s “a perfect tribute to all the hands that go into making it – from the female coffee farmers in Burundi that produced the blend.”

BCS Sir Isaac’s: A few weeks ago, when we saw this label clear the TTB, we asked “Are we getting a BCS Fig Newton this year?” Yep! We are This variant comes from Goose’s e-commerce team, specifically Melissa Alleguez and Ryan Hubona. Inspired during a company team-building event by Melissa’s habit of “stealing fig cookies out of her grandma’s cookie jar during her summers on Lake Michigan,” this brew comes loaded with 5 tons of Black Mission figs (see? there’s that ingredient specificity).

BCS Proprietor’s 2022: Ever had a Jungle Bird cocktail? That’s being turned into a stout. If you haven’t had one, imagine a drink with lots of pineapple, lime, rum and Campari. If we were getting a rum-barrel-aged Campari BCS, I’d be pretty psyched. Unfortunately, they went the opposite direction, promising a beer that “that combines banana, coconut, lime, and a new ingredient for the Bourbon County Stout family – pineapple.”

I’m all for BCBS Tiki, but … well, we’ll just see what happens here.

Goose Island traditionally releases all of its Bourbon County Stout beers on Black Friday. Event details are TBD. Which variant are you the most excited for? Tell us over on Facebook.