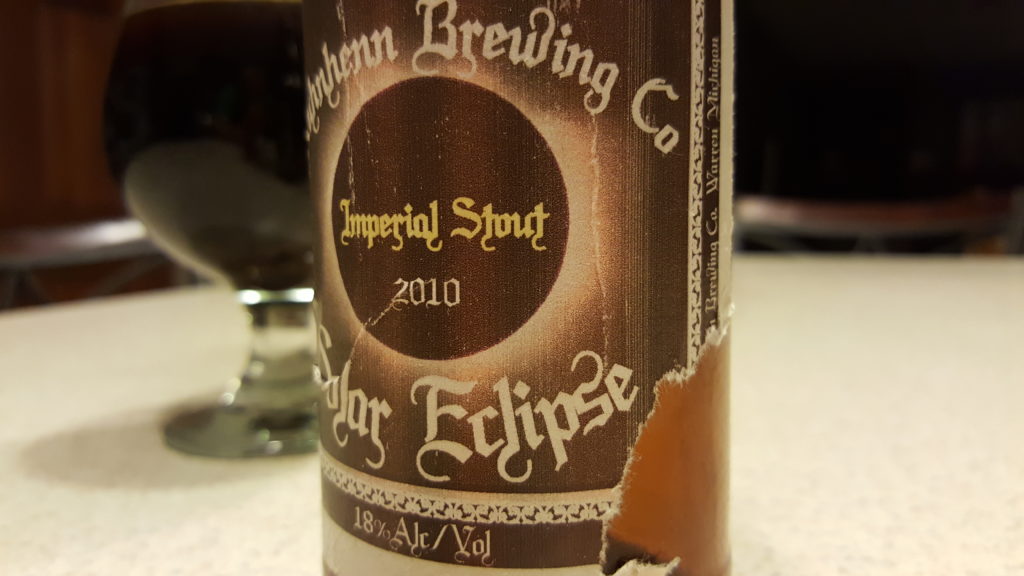 “Smooth” wouldn’t normally be the first word used to describe an 18 percent ABV imperial stout, but it’s fitting for a seven-year-old  pour of Kuhnhenn Solar Eclipse.

We catch flak from time to time for cellaring beer, and I know there’s some industry-wide backlash against the practice — some of which may be warranted but much of it is not. Sometimes, however, a beer just begs to be cellared. To be more specific, beers clocking in at over 15 percent ABV arguably beg to be cellared. They’re hot and boozy, shielding all sorts of fantastic aromas and flavors.

Dogfish Head’s World Wide Stout, 120 Minute IPA and Olde School Barleywine fall under that umbrella, and so does this nearly 20 percent ABV beast from Kuhnhenn. I had this beer fresh back in 2010 and found the alcohol to be overpowering. Sure, that may sound like a no-brainer but I want to taste more than just booze when drinking a beer, even if it does clock in at 18 percent ABV.

Seven years in the cellar has really allowed this beer to mellow into a smooth, borderline approachable beer that buoys intense wood grain notes with delicate chocolate and espresso.

Another cellared gem from Kuhnhenn

From The Cellar: Kuhnhenn Fourth Dementia 2010

Equal parts dessert and desert, Solar Eclipse ebbed and flowed between indulgent pastry and gritty sandpaper, finishing with a grab-bag of dark fruits.

Time in the cellar served this beer very well and is exhibit A as to why we like to cellar beer. We probably owe a more detailed explanation than that, and we’ll get to one in good time. In the meantime, to those holding on to any Kuhnhenn Solar Eclipse or looking for a bottle or two: Let it ride, you won’t be disappointed.