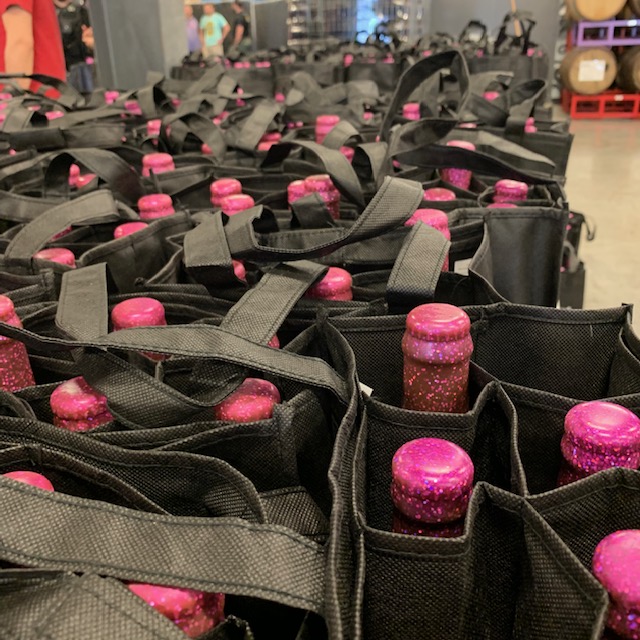 We checked out the event to find a well-oiled machine of brash bottle sharing and sampling.

Seems it wouldn’t be Dark Lord Day if there weren’t memorable stories about the weather. And this year was no different.

From a hot and sticky start to a mid-day thunderstorm so intense that local police, fearing lightning strikes, tried – valiantly tried – to move thousands of drunken revelers out from under a massive tent, the weather once again did not disappoint. At least it wasn’t on April 27, as it would have been in years’ past – as we saw snow that day.

With each year, the Three Floyds team finds ways to tighten and improve the experience and this year’s fest operations were noticeably impressive. While rows of empty bottles were common on the fest grounds, they were quickly cleaned up this year. Lines for timed releases of Dark Lord variants were indeed long, but staff kept everyone else moving. Dedicated, gated lines for those variant tappings also limited the line-jumping that drew complaints in years’ past.

Speaking of variants, the reigning kings – the vanilla aged Marshmallow Handjee and cinnamon/peppercorn favorite Chemtrail Mix – remain kings of the hill. But some newcomers inched somewhat close to their crown. ‘rrari Crochet, a Neapolitan and coconut stout aged in port barrels, was done to near-perfection, while Loadstar delivered on its coconut promise, complete with visible floating flakes.

Another gaining plenty of buzz around Dark Lord Day 2019 was the Rye Barrel Aged variant. Dozens of people waving fists of cash were eager to offer hundreds of dollars to people with those variants, as they exited the production facility with their bottles. As much as $500 was being offered for some variants.

But the buzz wasn’t limited to Three Floyds’ products, as dozens of breweries from near and far were on tap, while thousands of bottles were brought in to share. There was an onslaught for Modern Times’ Modern Tones aged in bourbon barrels with vanilla, and for their Chaos Grid dessert stout, while Bottle Logic’s Fundamental Theorem – a 21% burner – and Fundamental Observation both were lauded by many. Floating around the grounds were multiple bottles of Mikerphone’s Barrel-Aged S’More Cowbell, released Friday, was so good it made skeptics say maybe it is worth $60 for a four-pack of cans.

And yet it was – once again – Burning Foot Brewing, a group of Louisville homebrewers who turned heads and caused multiple “who are these guys?!” reactions from the crowd as they shared samples of their goods under the big tent. After discovering them by accident at last year’s fest, they were a must-find this year. Their Glaze Daze was like a liquid blueberry muffin, while an apple brandy/blackberry braggot-style stout, Hymn of Ninkasi, was another stunner. Here’s hoping their business plans come to fruition and they soon expand capacity beyond their garage.

Another introduction came this year, though, thanks to a share from the Boneflower Mead crew. They’ve got a collaboration coming with Eighth State, a nano brewery on South Carolina. Eighth State’s 15% barrel-aged stout with hazelnut, cocoa nibs and Madagascar vanilla beans – Aphelion – was made with Ponderosa Farm, another South Carolina nano brewery, was a memorable introduction to that beer scene.

With more than 12,000 visitors from nearly all 50 states, including Alaska and Hawaii, as well as Canada, Belgium and Sweden, Dark Lord Day 2019 lived up to the eternal hype – it’s brash, unapologetic and as the area’s single largest bottle share, remains a place to get introduced to impossible-to-find beer and breweries you’ve only heard about – or haven’t even heard about at all.