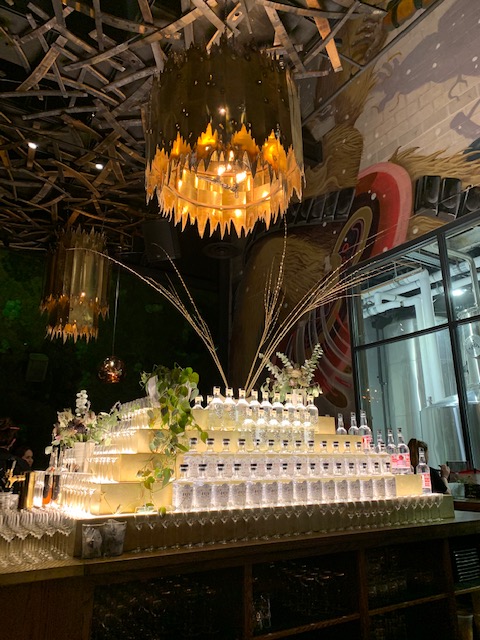 “Thence come the maidens
mighty in wisdom,
Three from the dwelling
down ‘neath the tree;
Urth is one named,
Verthandt the next –
On the wood they scored –
and Skuld the third.
Laws they made there, and life allotted
To the sons of men, and set their fates!
Skal!”

A take on a Norse tale of the world’s creation – and its inevitable ending – greets visitors to the new Three Floyds Distillery. It’s one of many things that reminds you, while taking in the vibe and perusing the menu, that it’s definitely the Three Floyds you know … until it’s suddenly not.

Metal music that even defies Shazam to identify the artist is followed by old-school rap from the Wu-Tang Clan and then a dose of Americana from The Devil Makes Three. It’s dark, much like the brewpub across the parking lot, but perhaps warmer and cozier, thanks to the wood décor and even a wall made entirely of green moss. Look up, though, at the exploding barrel staves that make up the ceiling, and you’re again reminded that this is pure Floyds.

Since a production facility expansion happened more than 2 years ago and the words “Three Floyds Distillery” stretched across the front, brewpub visitors have eagerly awaited what was to come. This month’s tasting room opening comes just in time for this weekend’s Dark Lord Day and is already eliciting chatter of when we might expect a Dark Lord variant aged in Three Floyds barrels.

Until then, though, there are cocktails to enjoy.

Gin, aquavit, white whiskey and rum are the first four spirits to come from their still, and each provides the base for three original cocktails. Each spirit highlights organic features and, to the credit of head distiller Abby Titcomb and distiller Eddie Wygonik, those features pop in every sip. Juniper, cardamom and lemongrass in the gin, dill, caraway and fennel in the aquavit, barley and oats in the white whiskey and cane sugar in the rum are all noticeable and welcome. Each are available in a sip, shot or pour, with some bottles available to go.

From those, guests can enjoy a series of twists on an Old Fashioned, a sour or even a grapefruit/hibiscus/ginger slushie. The Nordic themes continue through the “earth” “wind” and “fire” themes for cocktails, along with the names: Jord, Veor, Bruni, etc.
For the beer enthusiast in your group, they’ll also offer a rotating Three Floyds beer and spiritfree concoctions.

There’s also finger food – think hummus, meat/cheese, breads – as well as pastys: the tasty, doughy treat filled with beef, chicken or vegetables mostly associated with the Upper Peninsula of Michigan. On the sweet side, we saw some of Munster Donut’s best offerings served up with dips and sauces.

It’s the kind of stuff that’s easy to eat at the bar, sunk into one of their deep leather booths or one of the high-tops dotting the room.

Interaction with the staff reveals they’re equal parts chatty and knowledgeable – just as you’ll find at the brewpub – a sign that Three Floyds has also invested in training and educating on the distillery side.

The Three Floyds Distillery tasting room is open 4pm-Midnight, 7 days a week and is 21 & over only. The vibe there calls to mind yet another riff on a line from the same Nordic tale that greets visitors:

There, good people shall build a household
And in time, enjoy happiness.