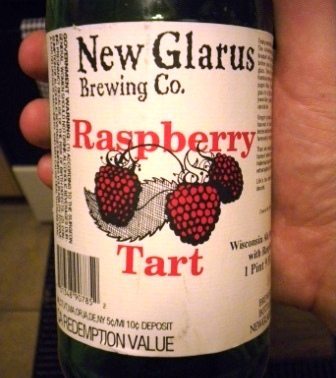 Is there any fruit that New Glarus can’t make better with alcohol?

Treat yourself to a rare delight. The voluminous raspberry bouquet will greet you long before your lips touch your glass. Serve this Wisconsin framboise very cold in a champagne flute. Then hold your glass to a light and enjoy the jewel-like sparkle of a very special ale.


Ah, New Glarus.  How we love you so.  We’ve adored your Unplugged Cherry Stout.  We’ve swooned over your BerlinerWeiss.  So, surprise, we’ve found you do great things with Oregon raspberries as well.  Who knew!

After the jump, details about an evening spent with the Framboise from our northern neighbors.  What other fruit can they work with? Blackberries? Blueberries?  Snozzberries?  Durian?  New Glarus could probably work wonders with all of them.

Ryan: Is there nothing that New Glarus can’t do with a fruit beer?  Every beer I have had under that style has been a home run.  And this might be my favorite fruit beer offering from our friends to the north.

The Raspberry Tart pours a crimson red, almost pink, in color with a bit of frothy head.

Stick your nose in the glass and you are smacked in the face with the smell of raspberries; FRESH raspberries, right off the vine.

There are lots of tiny bubbles dancing around in my glass leading me to believe this beer is going to have some nice carbonation.

And, I’m right.  The carbonation is fantastic.

The strong raspberry smell is carried over into the taste; tart, fresh raspberries to the point of being puckering.  Between the flavor, appearance and carbonation this beer is very much like a lambic.

I could easily, and happily, knock back a couple of bottles of this.

Andrew: New Glarus just gets fruit beers – from the Cherry Stout to the Berliner Weiss and now this Raspberry Tart, they seem to always hit a home run.

The Raspberry Tart poured a gorgeous ruby red with no head. The nose was nothing but raspberries, sweet and tart, kind of what I would expect if I were to smell a raspberry cobbler or pie.
There wasn’t as much carbonation as expected in the beer, really smooth and a bit thicker than some fruit beers. The beer tasted like mashed up raspberries – sweet, tangy and the tanginess of the beer lingered in my mouth once it was gone.

Another job well done by New Glarus. Now if they would only distribute
to Chicago… 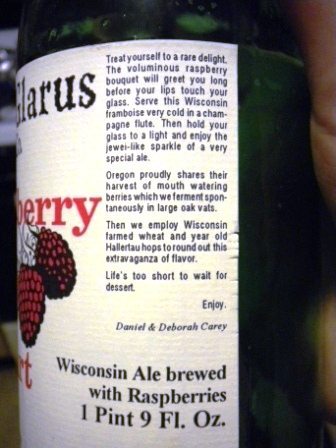 Karl: I’m going to go ahead and disagree with my esteemed colleague Andrew in his estimation that New Glarus should distribute in Chicago.  Sure, we’re missing out on a lot of really good beers here – but that makes them all the more special when we finally get our hands on them. There’s something to be said for scarcity.

I realize there are problems with the distribution laws in this state, but I don’t insist that we should have everything we want, whenever we want them.  Kind of like In-N-Out Burger.  Everyone wants it to come to Illinois, but to force them to break out of that southern California destation fast food designation that they’ve crafted for themselves would kill some of the specialness that they’ve worked to create.  Anyways, I digress.  Bringing this back around – maybe an In-N-Out burger would go well with a Spotted Cow?  (Remind me to post about Fred’s in Burlington one of these days.)

But damnation, what about the beer!

It’s hard to find fault with anything that New Glarus does with fruit.  It seems to be their muse, which makes sense.  NG’s modus operandi skews to the lighter-bodied beers even when they produce beers that are traditionally heavier, (as demonstrated when Ryan checked out their Coffee Stout).  So this natural lightness works to their advantage when they throw fruit into the mix.

This Raspberry Tart, basically an American Framboise, is light (natch) for the style but a little sticky or cloying.  Despite being called “tart” it’s really not much worse than the mild pucker of a Jolly Rancher – which is exactly how I described it in my notes.

I am also going to disagree with my esteemed colleague Ryan when he said he could “happily, knock back a couple of bottles of this.”  Having experienced the rigors of excessive Framboise intake, I don’t know if I could do a full bottle myself, but you could concievably do a couple of different things.

First off, since NG suggests you pour the Raspberry Tart into a champagne flute, it makes me think that you could mix a third a glass of Tart with two-thirds champagne to positive results.  Even better is a drink I picked up when Ryan and I took a trip to Rick Bayless‘ Frontera Grill – mix some Raspberry Tart with something like a Rogue Mocha Porter and enjoy the chocolate-raspberry awesomeness.