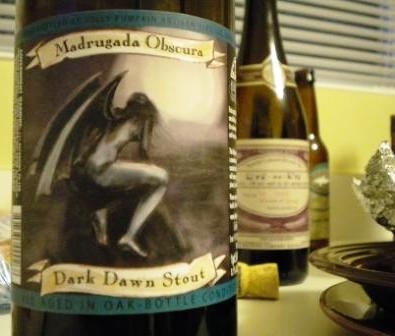 A Belgian inspired stout that is as dark as a moonless midnight, brimming of roasted malts and bitter hops. It will keep you good company in all places, be thay light or dark.


When Ryan broke this out of the cellar and said he had a “kind of sour stout,” the rest of the guys perked up like…well, you know how pets react when you open their food?   It was like they were cats and Ryan just cranked up the can opener.  It was adorable.

The Madrugada Obscura, despite having an awesome name, is an amazingly complex, rich and many-layered beer, almost enigmatic yet thoroughly drinkable.  More from the Guys:

Ryan: This beer is nothing like any imperial stout I have ever had before.  It pours dark as night, as you would expect an imperial stout to do, but that is about the only similarity.

The nose of this beer is a mix of a bit of vanilla, some chocolate and cherries.  Sour and tart.

That taste is…perplexing.  Again, because it is a stout by style you expect bold chocolate and coffee flavors.  But instead you are hit with black cherries, some tart, sour apples and just a hint of chocolate.

As it warms in the glass this beer continues to evolve.  The sour notes become far more pronounced.

Of the few Jolly Pumpkin beers I have sampled I do like this one the best; a fun take on an imperial stout.

Karl: I love the idea of a sour stout.  After years and years of stouts with coffee, chocolate, mocha, espresso, so on and so forth – finally!  A new thought for something to do with stouts!  Needless to say I was extremely interested in the idea of the beer, in addition to everything else.

Aside – does the fact that the brewery is named Jolly Pumpkin automatically skew your mental palate?  I mean, I’m kinda getting used to it but having gone through a 2 year seasonal streak of being obsessed with pumpkin beers I instantly think there’s going to be some nutmeg and cinnamon and everything else that goes into a pumpkin beer.  It instantly already throws off my expectations, which could be good in some cases, but for the most part it’s only just obscured things – at least for a little while.

After one whiff and one sip of the Madrugada Obscura (think it’s hard to say?  Try typing it without checking your notes or photos) any ideas of other beer styles evaporate.  For starters, this is definitely a stout.  Scents of coffee hit you first, but underneath is something subtle…something I’ve never seen in a stout before.  Is that…I think that’s something like sparkling white grape juice? Why yes, yes it is.  Very interesting. 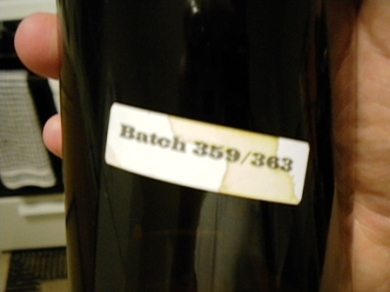 Looks like we got this one just in time.

In terms of body, it starts lighter than I’d expect but gradually thickens up somehow.  Perhaps that’s just my perception of what a stout should feel like, gradually giving way to what it actually was, but I can’t be sure.  It’s certainly a puzzling brew, in many ways.

The sour portion of the beer is somewhat obscured by the malts but is still certainly present, and it finishes with what I believed were walnuts.  In addition, I detected a hint of green apple and honeydew as well as a definite cider aspect as well.

The most interesting part of this beer was that as I moved it around, I realized it was changing flavor depending on where it was on my tongue.  As it shifted from sour to sweet to bitter to salty (as taste buds recognize) it changed even in that small amount of space.  Really a great experience.

Andrew: Madrugada Obscura?  Say that three times fast…I can’t.  (Eds note: Certainly not after a few beers, at least.) Back to the beer – the Dark Dawn Stout poured very dark with lots of thick, chunky, khaki-colored head. Sour notes were right up front in the nose of the beer, which obviously set it apart from other stouts, along with a lot of funk and a hint of chocolate.

The taste of the beer started off sour, then I could really pick up hops, some funk (yay brett), chocolate and a bit of fruit, cherries perhaps?