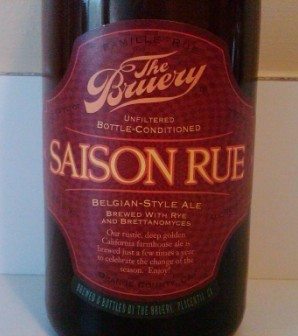 Saison Rue is an unfiltered, bottle conditioned, Belgian/French-style farmhouse ale. This is a beer of subtlety and complexity, with malted rye, spicy, fruity yeast notes, biscuit-like malt backbone, and a slight citrus hop character. With age, this beer will dry out and will become more complex with rustic notes of leather and earth from the contribution of a wild yeast strain. Being a Saison, Saison Rue is ambiguous unto itself as it is a different beer when fresh and when aged. We hope you enjoy it in all of its incarnations.


The Guys tucked into the Saison Rue after a long night of intense “sampling.”  Thus, palates might have been a little bit fatigued but we plowed ahead nevertheless.  You might see some of that reflected in the following descriptions, particularly with one of them…Sayeth the Guys:

Ryan: This beer poured orange to copper in color with a good amount of head.  Typical of what you would expect from a farmhouse ale.  But, there was nothing typical about the nose on this beer.  A sour funk dominated the smell.

The flavors of this beer were a bit more in line with a Belgian golden ale than a farmhouse ale.  There was a good bit of spices, cloves, banana and lemon in the taste.

The brett was not very noticeable until the beer warmed up.  In fact, it took me till it was close to room temperature to really pick it up.

Overall, this is a solid offering from The Bruery. It’s not too high in ABV, is easy drinking and maybe more importantly easily attainable.

Andrew: The Saison Rue poured golden brown/amber with big, white, frothy head. Lots of citrus-y, sour notes present in the nose, along with some spice and what can best be described as something “fresh.”

The beer itself was a lot drier than I was expecting, and not as sour as the nose had indicated. A very interesting flavor with well balanced funk, citrus, hops, malt and a kind of earthiness.

It may have just been the beers we tasted prior to this one, but color me unimpressed. I’d like to try this one again by itself, at the beginning of the evening as opposed to the end of the night.

Karl: I’m going to be completely honest.  I remember next to nothing about drinking this beer.  I know we had it, it was a while ago, it was a long night, there was baseball on and I believe some last-minute wedding decisions were being made as well.  So perhaps all of our attentions were elsewhere, but I know mine were for certain.

So – where does that leave us?  I’m not huge on Belgians but I can get into a Farmhouse every now and then, the Lagunitas in particular.  Here’s more proof that I’m either insane or should not be paid attention to at all in this case.  For some reason, the Saison Rue reminded me in a strange way of Udon noodles.  Wheaty and hearty, with a dry feel and a certain sense of umami.  But, of course, assume that I know nothing about this beer.  I’m sure it’s spectacular.

Review: The Bruery’s Saison Rue was last modified: February 6th, 2018 by The Guys