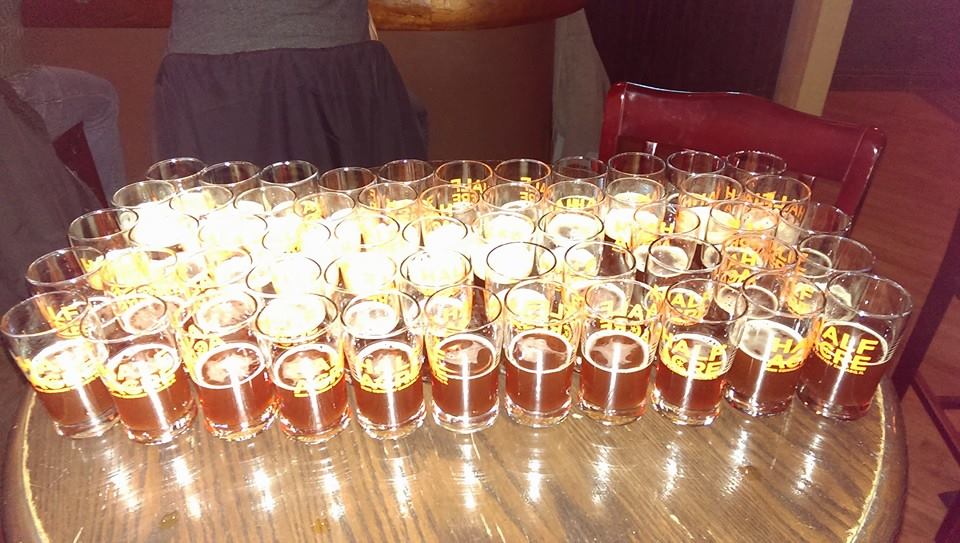 What does the time-starved craft beer drinker do when he has a case-worth of 22 ounce bottles to drink and not enough people handy to split them with? Find a bar to host your beer in hopes enough people will be there to help drink it, naturally.

And that’s exactly what we did at one of our favorite Chicago bars, The Green Lady, creating a pop-up vertical tasting of sorts for the unsuspecting patrons who wandered in on a Tuesday night. Our hope; if you pour it, they will come.

Everything from the planning to the execution were all done under the radar. We coordinated things through Friend of the Site and TGL Owner Melani Domingues. There was no publicizing the tasting, on our end or hers. We brought a friend, she gave one or two people a heads up and the rest was left to fate.

After sipping on a warm-up beer (I opted for a Spiteful Alley Time) Melani brought up a box of Half Acre tasters, laid them out on a table in the middle of the bar and Karl and I started pouring. There was no grand announcement to those bellied up to the bar. We assumed curiosity would eventually get the best of them, and it did. One-by-one people wandered over wondering what we were pouring and why.

So we started doling out sets of five tasters filled halfway with varied ages of Stone Double Bastard. People took their glasses and returned to their tables, their bar stool, their discussion. Some came back to swap tasting notes, some didn’t.

After clearing out five years worth of Stone Double Bastard we turned to our second course, seven years of Stone Old Guardian. Some of the people who took part in the first vertical reluctantly bowed out of the second.

Amusingly John Laffler, of Off Color Brewing fame, was having a birthday party down the street at Northdown Cafe and Taproom that night and a few people who were attending that shindig happened to drop into The Green Lady for a beer or two beforehand.

They said thanks, dropped off business cards and a beer for each of us and bid us adieu. 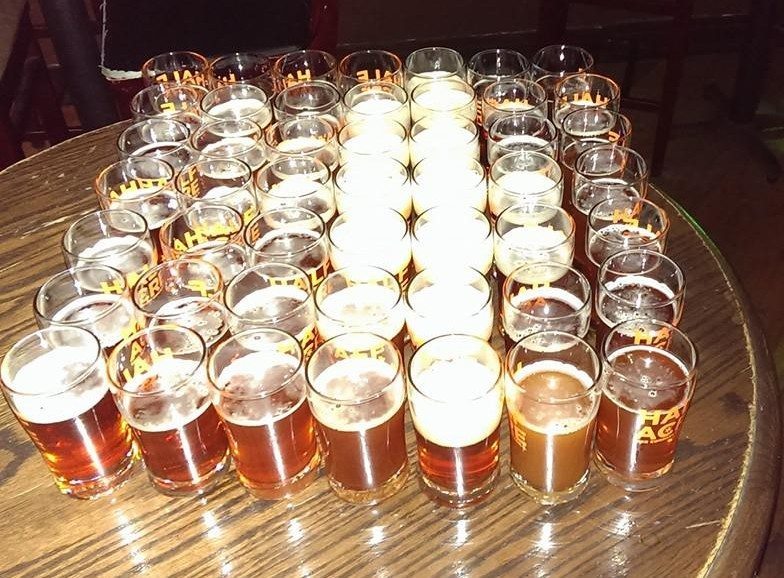 While the industry-types had to depart, others stuck around a few others wandered in too. We even had someone come in well after the beers were doled out hoping to get in on the action after seeing things play out on social media. Sadly, he was too late.

Big bottles of beer are meant to be shared and a vertical that I’ve dedicated this much time to assemble screamed to be parceled out. That’s kind of what drives this whole craft beer thing anyway, right? Splitting good beer with friends, old and new alike?

So here we were, in a bar, sharing beer and taking notes. It’s hard enough to do the latter when there is just three of us sitting around a dining room table. Add a crowd of people and revolving discussions about the beer industry, politics and Chicago media and it’s easy to let the notes slip. But we kept up. After all, this wouldn’t be much of a beer review if we didn’t follow through with what we initially set out to do. 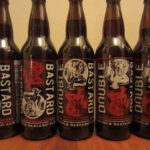 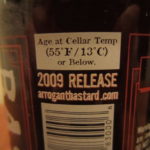 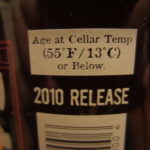 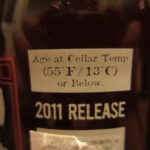 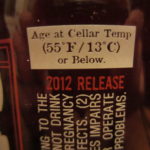 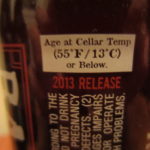 Stone Double Bastard, moving from oldest to freshest per our standard operating procedure, we begin with:

The first thing I noticed about this beer is how sparkling the carbonation was after five years in the cellar. The nose gave off a blend of spearmint and caramel. It’s creamy on the palate with dark fruit and white grapes dominating.

This was a unique start to this vertical as the vast majority of the hoppiness in a fresh pour had long-faded leaving a creamy, sweet beer in its wake.

A nose full of cherries laid the foundation for flavors of sweet potatoes slathered in melted butter and sprinkled with brown sugar. Throw in some plums and pears and you have a very intriguing beer.

The hops begin to appear mid-way through this vertical, accented by grapefruit pith and orange peel, however its sweetness still dominates. The 2011 pour retains the brown sugar flavor that stood out in the 2010 and was joined by plums and Ricola candy.

The hops are far more present in the 2012 pour, with a distinct piney-ness present from the first sip to the final swallow. The dark fruits dominate over brown sugar in this iteration, namely dates and figs.

The carbonation is quite sharp further highlighting the delicate blend of piney hops and sweet fruits.

And now I am reminded why I chose to cellar this in the first place.

A fresh pour of Stone Double Bastard is all-in. The hops are sharp, bitter and bracing. Very aggressive. There is a hint of malts trying to peak past the hops — light brown sugar, grapes and maybe cherries — but are buried under vats of resinous grapefruit and pine needles.

This was a fun cellaring experiment, far better than our five-year go-round with Stone Russian Imperial Stout. There was plenty of variation between each beer. Despite how it may have come off, I do enjoy this beer fresh but found it to really hit the sweet spot after about three years in the cellar. That 2010 pour hit all the right notes.

Similar to my final thoughts on our Brooklyn Black Chocolate Stout vertical, the Stone Double Bastard is very approachable in terms of price point and readily accessible where Stone’s beers are, which makes this a prime candidate to cellar — if you’re so inclined. 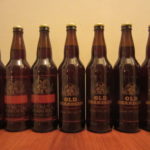 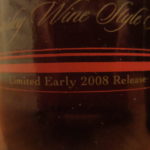 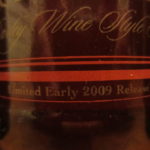 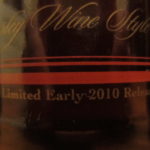 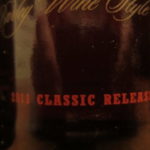 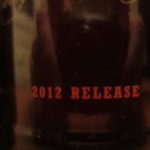 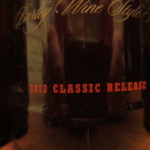 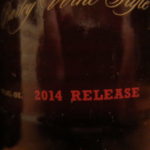 I’d love to lay out a couple hundred more words on how great this beer was, but I don’t have them. Maybe it was the beer, or the conversation or the sharing of other beers that seemed to magically appear — but my notes got shorter and shorter with each sip.

I can tell you, however, that this was unlike any American Barleywine vertical we’ve sampled to date. In the past, we found the hops fading at about year three or four, making way for a malt-heavy beer that is sweeter than it is hoppy. But that didn’t happen with the Stone Old Guardian. Instead, the beer got fruitier and fruitier the older it got.

A fresh pour is accented by a sticky, piney, resinous flavor up front — backed up by notes of apple butter on toast that fade to a puckeringly bitter finish. The flavors are bold.

Jump ahead to a 2008 bottle and I found a very mellow beer highlighted by tangerines, apricots and an orange creamsicle. It was, hands down, one of the most enjoyable aged beers I’ve ever had.

The in-your-face stickiness and resinous aspects of a fresh pour faded a bit with each year of age allowing fruitier flavors to come out; orange peel, grapefruit and the aforementioned tangerines and apricots.

Much like the Double Bastard, this is a great starter project for someone who wants to dabble in cellaring beer or building a vertical.

However, if you do plan to set aside some Old Guardian I’d recommend aging it past the three-year mark. This beer is still plenty hoppy up until then, as we found out early on when we did a three-year vertical of Old Guardian, so let it go a bit longer to really see some change.

Thanks again to Melani for letting us crash The Green Lady for a night and thanks to those who grabbed an armful of glasses and joined us on this journey through five years of Stone Double Bastard and seven years of Stone Old Guardian.

Sharing is Caring: A Popup Vertical of Stone Beers at The Green Lady was last modified: February 6th, 2018 by Ryan