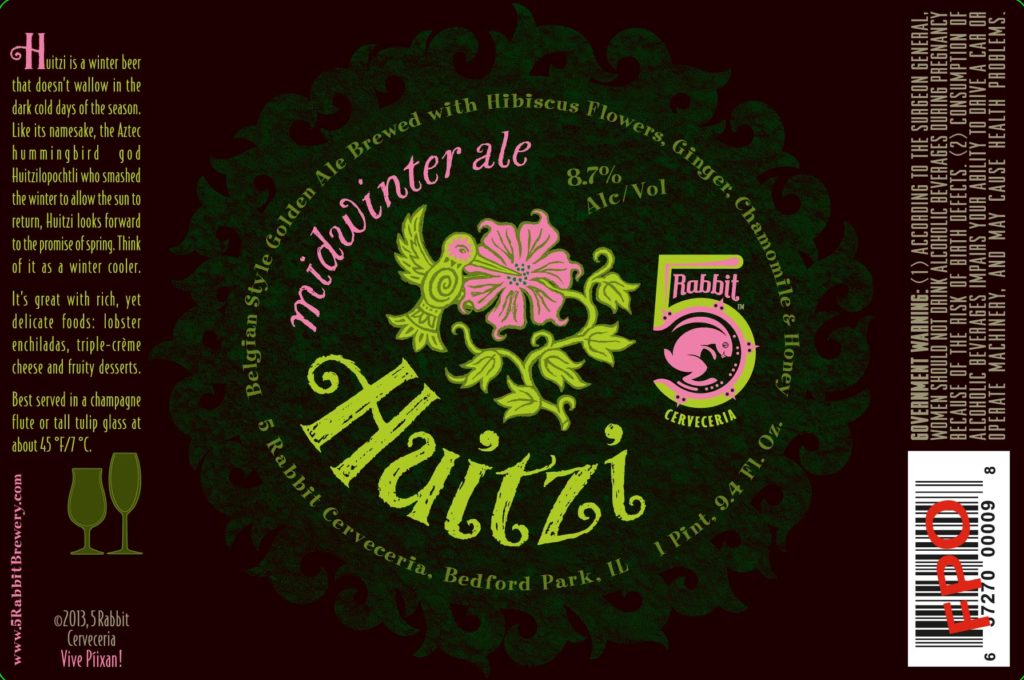 A term like ‘Midwinter’ when it’s used to describe a beer becomes almost meaningless when winter in Chicago seems to kick in somewhere around February and sticks around through damn near into April. Half-expecting this, I held onto a bottle of 5 Rabbit’s Huitzi to pour earlier this week. Now that today is the first day to actually seem like springtime, it feels right to talk about this beer a little bit.

Pouring a lovely rose-pink and amber color, this beer tasted lightly spiced in a way that resembles the savory nutmeg-and-cinnamon aspects of a winter beer, while keeping a bright springtime sparkle with floral notes from the hibiscus and a definite finish of sharp ginger. Most ginger beers seem to just have flavors that resemble ginger candy – sweet, not too sharp – but the finish here was aggressive, like shavings of fresh ginger root. Very cool. I didn’t get a ton of the honey in here; I suspect it’s blended so well with the sugars that it just creates a nice sweet spine to hold up the other flavors.

While it’s going to be hard to unseat the awesomeness that is 5Lizard from its pedestal as my favorite thing these guys make, this beer is probably my second favorite production thus far. Moreover, if this is what the future is going to look like moving forward for this operation, after the recent speedbumps and as we move forward into the John J. Hall brewmaster era, we’re in for some good beers. And that’s good news.

If you want a chance to see what 5 Rabbit has planned for the coming summer months, they’re inviting a limited number of people to visit the “Rabbit Hutch” (there’s something Playboy-esque about that name, guys) to check out the ongoing experiments that’ll influence their Paleta series, and might even include tastes of their new “Missionario” brew. More here.

Note: This beer was provided gratis from the brewery.