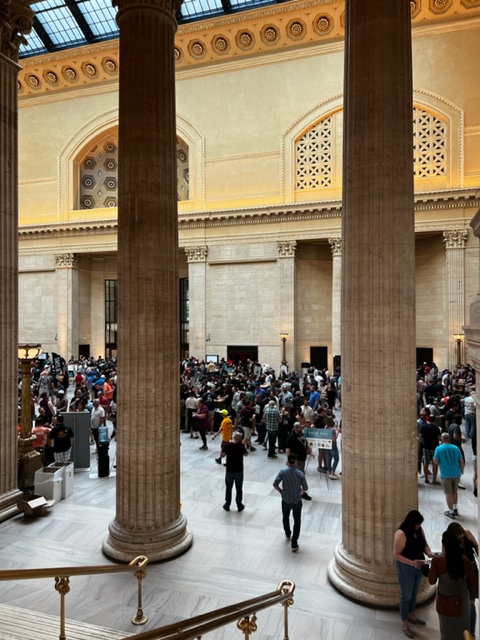 Beer Under Glass at Union Station might have been in a new location this year, but Friday’s event had an air of familiarity.

The kick-off event for the return of Illinois Craft Beer Week – the real, in-person return –felt a little like a family reunion of sorts. All the smiling, familiar faces and re-connecting with brewery owners and staff from across the state just felt good.

First, the location. After years at Garfield Park Conservatory, BUG’s move to the Great Hall at Union Station was a good one. The breathtaking room – still under glass – provided ample room for the 125 breweries and hundreds of attendees. Sure, the line to get in (wrapping down Canal and Jefferson streets) was daunting, but it moved fast and once inside, it was easy to navigate. Transportation was a breeze, too—cabs were abundant outside, along with easy access to multiple Metra lines and the CTA blue line.

Breweries brought a diverse range of styles, from pale ales to barrel-aged stouts. Lagers and fruited sours were abundant as well: Something for everyone, indeed. A much-welcomed approach saw breweries organized by location: 51 Chicago breweries grouped together, eight from the south suburbs, 20 from the northern suburbs and beyond, 39 from the western suburbs and six from central Illinois.

Another great feature was a back room dedicated to the small, start-up breweries based at Logan Square’s craft beer incubator Pilot Project Brewing, one of the fest sponsors. In that room, we were introduced to Rovm Hard Kombucha, Histrionic Brewlab, and re-connected with Funkytown. They were a standout at the recent Brews & Bites event at Time Out Market and once again impressed – with a line for their beer most of the night. Their Hip-Hops and R&Brew pale ale was a favorite among our group, while Gym Shoe Weather, their Belgian pale ale, was a standout as well. Funkytown is fast becoming a brewery to watch.

Many attendees lined up for Phase Three’s Eunoia 9, a peanut butter/banana stout, but those bottles were gone before the VIP session ended. Still, another consistent favorite among our group was their BUG exclusive Dank Herbasaurus, a dank west coast double IPA that had us talking about it even a day later.

More From GDB:  Arrogance Is Bliss: A Night of Stone Brewing in Chicago

Also kicking fast was south suburban Brothership’s bomb pop-inspired sour, but they more than made up for it with Quantum Enlightenment – an imperial stout collaboration with Arclight and Monochrome featuring toasted coconut, raw coconut, coconut water and cassia bark.

And while Hop Butcher brought crowd favorites like Tavern Cut and Blazed Orange, it was their citra-forward Cosmic Mountain triple IPA that had us going back for more.

We stopped by Bloomington’s Lil Beaver to sample their roasty cinnamon coffee coconut barrel-aged stout: another winner. We were also pleasantly surprised by their coconut cream pie wheat beer. You wouldn’t think that would work, but it did.

Beer Under Glass at Union Station also gave us the opportunity to try Ike & Oak, Niteglow, Black Lung, Dutchbag and others for the first time, but it won’t be the last.

And now it’s on to a series of events across the state which you can find here. It’s capped by Thursday’s “Day of Action,” where they’re urging all of us to contact legislators to pass a bill to allow Illinois breweries to do direct-to-consumer shipping. Distributors won’t be happy about it, but much like the return of Illinois Craft Beer Week, it’s nice to see the Guild once again leading a fight for its members.

An Impressive Return For Beer Under Glass at Union Station was last modified: May 16th, 2022 by Steve