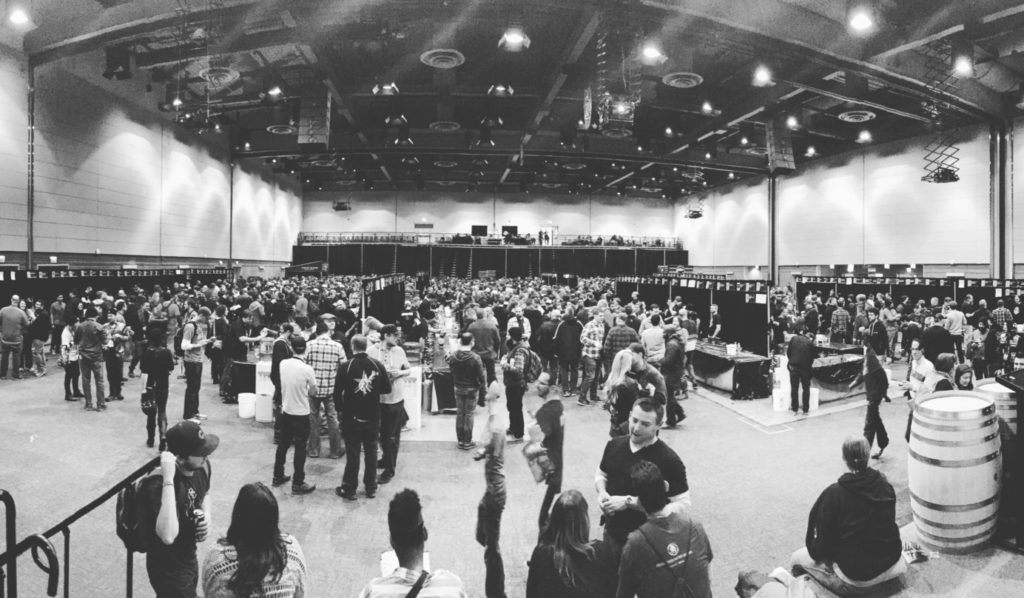 We’ve put together a FoBAB How-To with tips from the experts. (That would be us.)

If it’s your first time at this famously high-gravity festival, you really do need to be prepared for what you’re about to walk into. You’re about to be elbow-to-elbow with roughly a couple thousand rabid beer fans all out for the best array of barrel-aged beer known to man.

We’ll start with some basics. You should know a few of these if you’ve been to a beer festival before, but a parade of monstrously boozy beers can make people forget their names and where they’re from, so please internalize this early. This is not the same as sipping a dozen IPA samples on a sunny summer day in a city park. You’re here to do work. Treat it like a mission. A really fun mission where you get to drink awesome beer.

The biggest breakfast you eat all year should happen about two hours before you arrive.

Water fountains are everywhere at FOBAB. You have no excuse not to match every beer sample with a couple ounces of water. Yes, you may waste some precious time in line for the restrooms, but tomorrow-you will thank today-you when the headache is a dull thud instead of a jackhammer. Seriously. We speak from experience.

You’re gonna be hungry after this fest. Trust us. Have some leftovers on standby, ready to be microwaved. Or identify that take-out spot that’s on your way home. Download Grubhub and schedule something new. You’ll be glad you did this.

This one is super important — make this arrangement before indulging in pour after pour of double-digit ABV beers. Identify the train station, ensure the Ventra card is loaded or pick an easily-reachable corner to arrange a post-fest pick-up. Please.

The dump buckets are your friend:

Don’t worry, you will most assuredly get your money’s worth if you plan on stumbling out instead of walking out. But with the price of a ticket (especially this year) you get access to tons of amazing beers – and some failed experiments. If something doesn’t blow your wig up in the first sip, there is no shame in pitching it. The volunteers don’t care – you won’t be hurting their feelings.

Go in with a plan.

In recent years, I’ve gone into FOBAB with the intent of diving in to a style or a theme: lighter beers, wild beers, ciders, meads, etc. Usually that plan goes out the door in about 15 minutes, but I usually manage to try a few things I otherwise would have bypassed for the same old strong porters and stouts.

That said: if this is your first FOBAB? Go ahead and dive in head first to the big stuff. You know you want to, so indulge. Don’t sweat that 14% imperial rum-barrel coffee porter. Go back for seconds on that BBA barleywine if you really like it. You did follow our first recommendations, right? Then you should be okay.

FOBAB is the best display of extreme and eccentric beers in the Midwest. Try the crazy stuff. Chances are about 50/50 that you’ll ever see it again.

Know who you’re looking for — before the kegs kick.

There are heavy hitters at FOBAB you can safely expect to see, namely folks like Goose Island, Revolution, Spiteful, Destihl and Pipeworks. If you haven’t tried their beers, go for it! A 2oz try of something you haven’t had is better than leaning into a 22oz bomber or a 10oz snifter at a bar if you don’t like it.

That said, there are going to be things that disappear faster than others. Beers from regular award winners will have lines (Destihl’s Dosvidanya and variants, Spiteful’s Malevolence Caliente) as will the white-hot “spotlight” brewers (places that get tons of press and online attention like Mikerphone and 18th Street).

Right now, I’m impressed by the amount of attention More Brewing’s Henna stout is getting. On Tour just won big at GABF and is sending beers to FOBAB, so they’ll probably get some fast attention. Same with Weldwerks for their Medianoche (which will be pouring). If you want to try what most consider the reliably best in barrel aging, look to these guys.

For the first time, the ICBG released the breweries in attendance in advance this year. Scan the list and know who you’re planning to bee-line to.

Oh, and check our coverage from previous years to find out who won what then, too. If something sounds good, make note of it — award winners regularly return to the lineups.

As an ICBG event, the lineup is heavy on local and state brewers. Which is great! I always love seeing beers I know from local brewers, and seeing beers from from downstate brewers and shops outside Chicagoland are also great – it generally saves me a trip.

That said, when breweries that don’t hit store shelves often (if at all) here in Chicago send beers to this event, don’t sleep on the chance to grab them. Keep an eye out for the offerings from Lost Abbey, Jester King, TRVE and Rare Barrel. (We’ll look the other way if you want to try a Wicked Weed beer, too. They’ll be in attendance this year and I bet they kick fast in spite of the negative post-buyout press.)

Every year at FOBAB there are one or two beers that you’ll hear ripple around the crowd. You’ll pick up their names via osmosis. In this instance, crowdthink is usually right. Last year I heard four different people walking past me mention Weldwerks Peach Climacteric to their friends. I made a beeline for it and go figure, they were right — it was great.

Also: people are thrilled to tell you what they’ve found that they like. After about 30-40 minutes of sampling, don’t be afraid to ask the person who you just accidentally elbowed what they’ve been digging. (And you will elbow, jostle or otherwise nudge someone.)

They might send you on a journey you didn’t expect.

Lastly — and once again — get home safe.

You arranged this in advance. Now is not the time for an audible. No changing those post-fest transit plans now. You made arrangements to get your rear safely planted on the couch at home, you need to stick to those plans. Besides, breakfast did it’s job to give you that foundation. You’ve earned that warmed-up pizza waiting at home.

So You’ve Decided to Go to FOBAB: Some Tips From the Pros was last modified: June 20th, 2018 by Karl