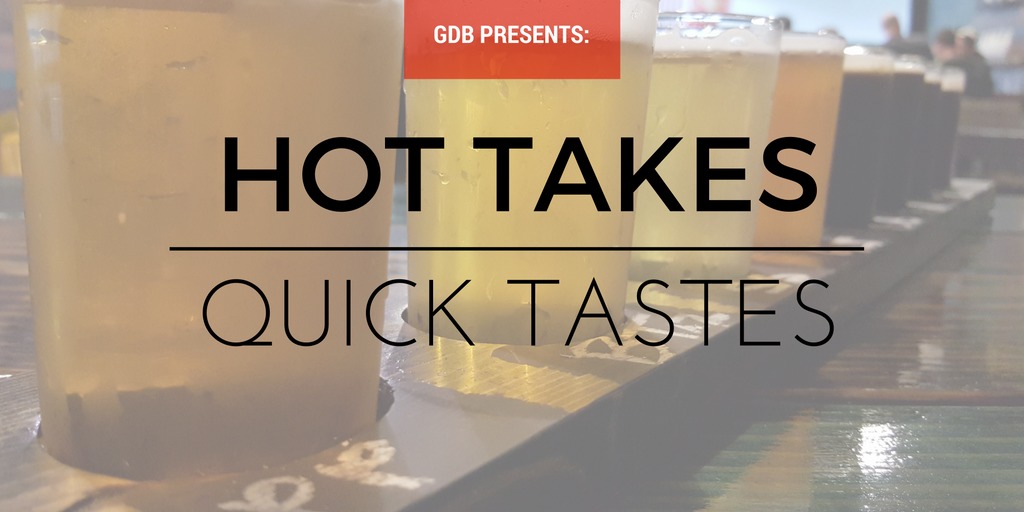 Because we respect your time too much to waste it on 1000+ word reviews of single beers, here’s a quick rundown of what we’ve been drinking and digging lately.

Not every beer needs a deep dive. Trust us, we can get pretty detailed when it comes to drinking beer, but at the same time we recognize that there are (A) a lot of beers out there and (B) you don’t have a ton of time in your day. So here, without further blithering on our part, are some quick snapshots of beers we’ve enjoyed lately.

Oh, and we should add per our usual, up-front disclosure, that all of the beers below were provided, without inquiry on our end, by a brewery or PR firm for review.

Now, here are your snapshots:

Sam Adams‘ take on the hoppy wheat ale is refreshing, drinking less like a wheat ale and more like a pale ale — which is just fine in my book. The nose is citrus-forward, marked by orange peel and lemon rind. The body is a tad dry but sweet with some floral hops and a smidgen of pineapple. A touch of bitterness lingers alongside a crisp finish.

As the resident crazy guy with a big foam finger and painted face cheering on the lagers comeback, I was more than happy to see Sam Adams lead with a lager this spring. This helles, brewed with “orange blossom flavor,” was light on the palate with a nice honey and mandarin orange sweetness balanced out by some dense breadiness. Fresh as Helles finishes smooth and creamy.

A helles isn’t a style I routinely reach for, however this was a fun take on what was once a brewpub staple.

I’m not going to lie, splitting the beer into multiple barrels caught us as a bit gimmicky, and kind of unnecessary. But it works. You catch snippets of the rum, brandy and whiskey barrel-aging the most, however no one barrel overpowers the other. The barrel-aging adds dimensions of oak, vanilla, smoke and dark fruit to an already sturdy stout. The raisins are a nice touch too. And even at 11 percent ABV, the alcohol is fairly tame.

This collaborative dark ale from Stone, Firestone Walker and 21st Amendment lands on the funky side. The beer, released in late fall and brewed with dried mission figs, pink peppercorns, fennel and chia seeds, is super earthy and herbal. The figs provide a nice compliment to a rich body while the fennel and chia seeds add some grit.

This kind of reminds of a beer once brewed by Furthermore called Thermo Refur. The ale was brewed with black pepper and red beets. It was good and definitely funky, but I could only crack one every-so-often. El Camino (Un)Real was the same way. Enjoyable in small doses.